The ball slam is a valuable addition to your training routine that can help build a strong core and let out a ton of steam and aggression, but are you sure you’re even doing the exercise correctly?

For this movement, you shouldn’t settle for anything other than perfect form—especially because it’s such a killer exercise that can serve as a highlight of your training plan. Let Men’s Health fitness director Ebenezer Samuel, C.S.C.S. and associate fitness editor Brett Williams guide you through the move’s subtleties, saving you from the bad habits that are keeping you from unlocking your fitness potential.

Before pick up the ball and start taking out your rage on the floor, take note that it’s extremely important to pay attention the movement here. Hitting the proper form is essential to make sure you’re getting the most out of the exercise—particularly because of the subtle details that make it really effective. Let’s break down everything you need to know. 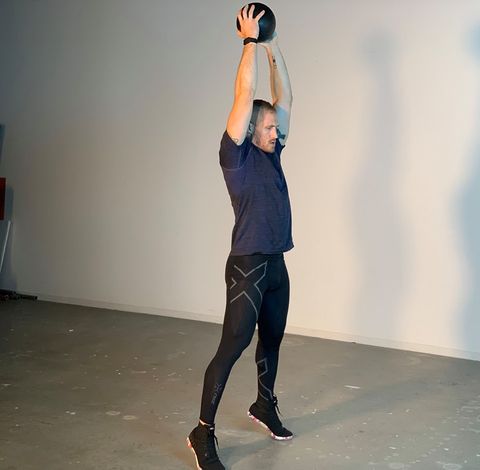 Eb says: The aim of the ball slam is to actively slam the ball into the ground. Yes, you’re often doing this in a metcon-style workout, but that you still don’t want to cheapen any rep.

It’s better to do fewer reps of ball slams (or take longer to do them at least) while still getting the maximum effect. So don’t rush your ball slams and “pat” the ball into the ground so you can go again. Instead, work to explode upwards, then explode downwards with as much ferocity as possible, as if you’re trying to send the ball straight into the center of the earth.

Eb says: When you pick up the ball from the ground, you’re going to lift it as explosively as possible. Your focus when doing this should be on exploding upwards and getting as tall as possible. Get the ball up as high as you can.

This will prevent you from overextending at the lower back—and in doing so, protect your lower back. You’ll also be on your toes, fully extended at the knees, hips and ankles, ready to slam the ball downwards.

Eb says: This is part of getting tall. You want the ball at max height when you’re extended, so you want to reach those arms up high. You’ll often see people bring the ball behind their heads, bending at the elbows; don’t fall into this trap. This costs you acceleration and slows your ability to slam: you wind up having to bring the ball upwards against gravity again, largely with only your triceps and lats driving the move, then explode downwards. Focus only on getting the ball as high as possible.

Eb says: The most common ball slam flaw you’ll see: People only hinging forward at the waist to drive the ball into the ground. That’s costing you power and potentially creating back pain too.

Want to master even more moves? Check out our entire Form Check series.