At eight months pregnant, Kelly Rowland is still killing it with high energy choreography to her new single ‘Hitman.’ She danced up a storm in a new IG video.

Kelly Rowland isn’t letting a huge baby bump get in the way of her dance routines. The 39-year-old showed she can still move it like she did back in her Destiny’s Child days, despite being nearly nine months pregnant. Kelly showed off some new choreography she learned to go along with her new single “Hitman,” and shared the video to her Instagram page on Dec. 30, blowing fans’ minds.

Kelly could be seen on a grassy backyard while wearing pal and former bandmate Beyoncé ‘s Adidas x Ivy Park Maroon & Orange Cargo Joggers, a matching sweatshirt and trainers. Her figure is still long and lean, despite her baby bump sticking forward. Her outfit allowed for maximum movement, and Kelly went for it. Her choreographer Kany Diabaté even counted down her beats, “five, six, seven eight” as the singer burst into dance.

Kelly’s routine was full body movement, with her arms and legs moving in perfectly choreographed motions. She even bent down at the waist and one point and snapped her head back up as if she didn’t have a baby belly in the way. “Aw YES!” Kany could be heard cheering as Kelly nailed the routine perfectly, before turning and strutting away from the camera. Kelly wrote in the caption, “#OOOOO SHE WANTS TO MOVE #HITMAN #dancingpregnanakeyoutiredAF.” Well, you could never tell from Kelly’s pregnant dancing that she was actually “tired AF.” 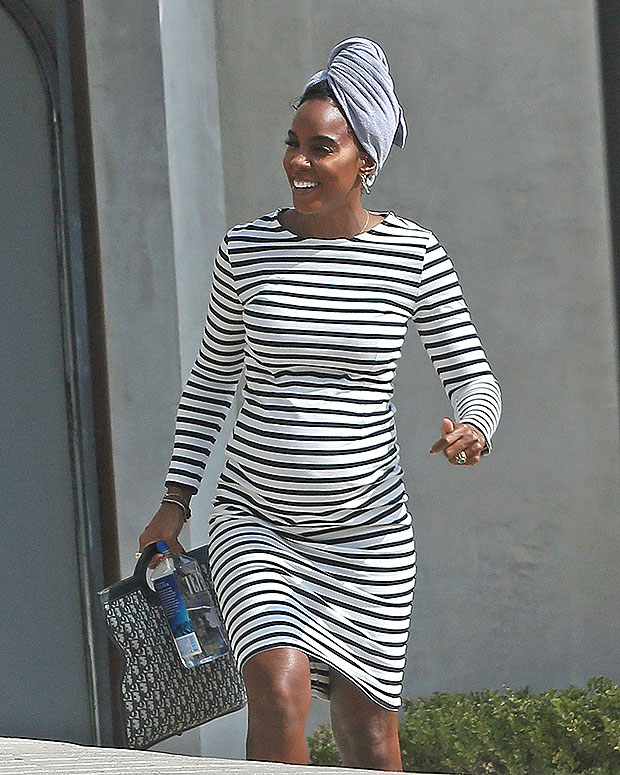 Actress pal and fellow dance aficionado Jessica Alba rooted, “Yaaaasssss” in the comments about Kelly’s very pregnant yet very high energy routine, while Blackish star Tracee Ellis Ross  wrote, “yesss honey.” Fan @keema marveled, “Meanwhile I’m 9 months pregnant and can barley walk without pain, while author and doula Lori Bregman joked, “Girl…………… dance like that and this baby is gonna pop right out ! Love it @kellyrowland #getitmama,” and reposted it to her own IG page as inspo for other mamas.

Kany shared a photo of herself and Kelly together on her Instagram page and explained what the two women were up to. “When we makin @kellyrowland dancing FULL GLOWIN PREGGO !!! go check her page and her tiktok to see the result and geton the challenge!! GOALS!!! i love you kelly and CONGRATS!!! this was funnnn!” The result was the killer video that Kelly shared of her dancing to “Hitman.” Kany added, “2020 is almost over guys . Lets be safe until then.” In the accompanying photo, Kelly’s bare baby belly could be seen in between her white crop top and low-slung white sweats. She’s currently eight months pregnant with a baby boy, her second with husband Tim Weatherspoon. They’re also parents to a six-year-old son Titan.