A volunteer at Carole Baskin's Big Cat Rescue was seriously injured after an attempt to feed a tiger went terribly wrong.

An official at the "Tiger King" star's facility in Tampa, Fla., took to the facility's Facebook page to make members of the public aware of the grisly incident.

"She opened a guillotine tunnel door at one end of the tunnel, and when [Couser] went to raise the second door she saw it was clipped shut. This is our universal signal NOT to open a gate without the coordinator coming to assist, but Candy said she just wasn't thinking when she reached in to unclip it," the post explains. "It is against our protocols for anyone to stick any part of their body into a cage with a cat in it." 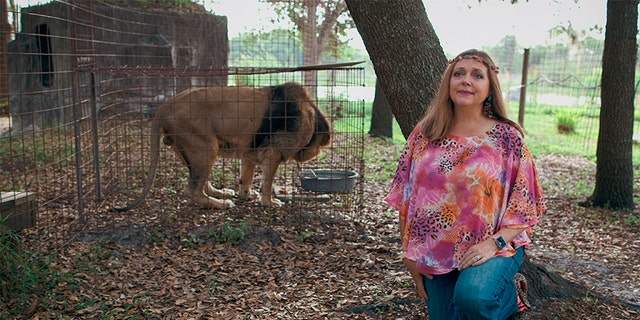 Carole Baskin, founder and CEO of Big Cat Rescue. On Thursday, the facility revealed that a female volunteer was seriously injured after a tiger bit nearly bit her arm off.
(Netflix)

The post goes on to explain that the big cat "grabbed" the volunteer's arm and "nearly tore it off at the shoulder."

The tiger, fortunately, "dropped his grip" when another staffer came running. Another employee, who is also a nurse, tried to stop the bleeding from Couser's armpit, while an additional person on-site managed to pull her to safety. An ambulance was called, the post continues.

Couser has been taken to an area hospital and was still conscious when an ambulance arrived at the scene. The volunteer, who has been a green level keeper for lions and tigers at the site for almost three years, "insisted that she did not want Kimba Tiger to come to any harm for this mistake," the post said.

The tiger has been placed in quarantine for the next 30 days as a precaution. 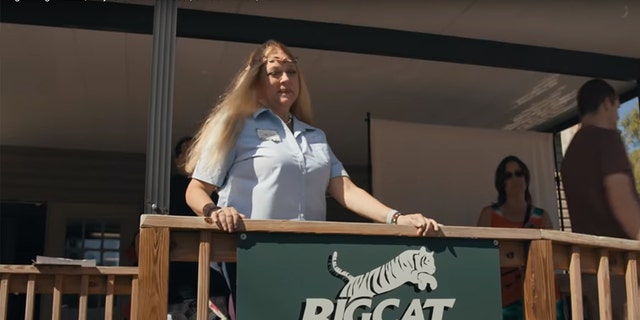 The volunteer at Big Cat Rescue has been taken to the hospital. An official at the facility described the injury as ‘serious.’
(Netflix)

Big Cat Rescue confirmed they will have grief counseling on-site for those who have been affected by the incident. Baskin, who owns the big cat park with her husband, was on-site to talk to staff members in a meeting afterward.

"Carole reminded everyone that this sort of tragedy can happen in the blink of an eye and that we cannot relax our guard for a second around these dangerous cats. This happened on the day of our federal bill to ban cub handling and private possession comes to the House floor for a vote," the animal sanctuary explained in the Facebook post.

The federal bill Baskin and others are working toward getting passed is reportedly known as the Big Cat Safety Act. The Facebook post explains that, if passed, it would "eliminate having them untracked in backyards around the country and ending up in sanctuaries where wonderful people like Candy Couser have committed themselves to providing care for those discarded by the pay-to-play industry."

Baskin shot to fame with the release of Netflix's "Tiger King: Murder, Mayhem and Mystery" docuseries earlier this year. It followed Baskin's work at the Big Cat Rescue, as well as her ongoing feud with her nemesis, Joseph Maldonado-Passage, also known as "Joe Exotic." Maldonado-Passage is currently serving a 22-year prison sentence for participating in a murder-for-hire plot against Baskin.

Maldonado-Passage previously owned the Greater Wynnewood Exotic Animal Park in Oklahoma before it was taken over by Jeff Lowe, who was also featured on the Netflix program. However, Baskin was granted ownership of the Oklahoma zoo earlier this year.