Salon co-owner Coll Livia received the shocking messages that ominously opened with “can you do me a big favour?” the day before the customer's Friday morning appointment. 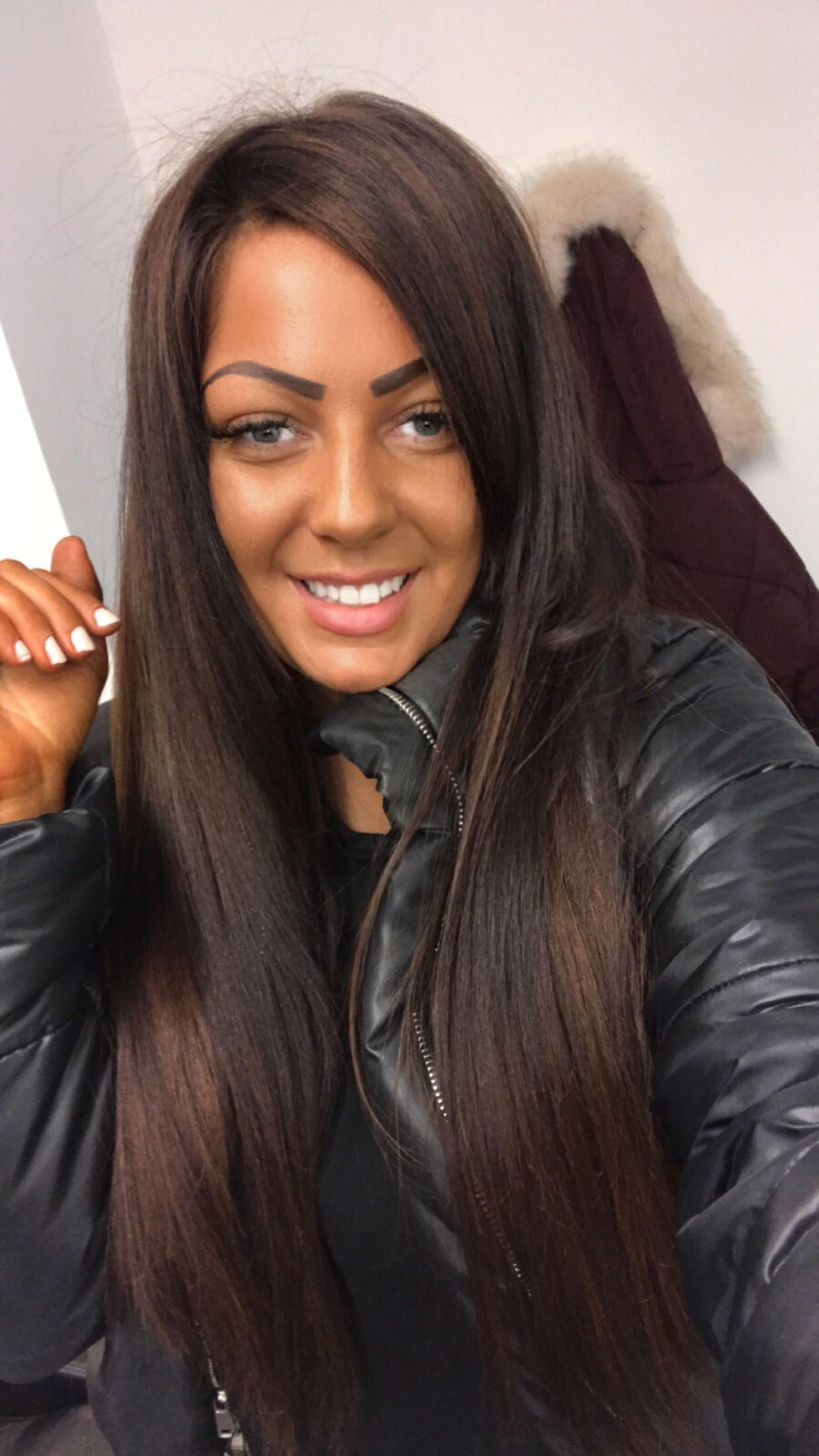 In the bizarre 10-message exchange the unnamed woman begged Coll to let her have the £35 Russian lash treatment at Bombshell Studio in Wigan, Greater Manchester, despite not having the funds.

The woman offered £70 in fake notes and later threw in a pasty and a pair of her child's new trainers from B&M to sweeten the deal.

Mum-of-one Coll, 28, politely declined the offer and proposed an alternative slot for her to have the treatment after her partner had been paid.

Enraged by her not being open to the offer the woman furiously messaged Coll branding her “disgusting” and sniping “it’s not like you need the money”. 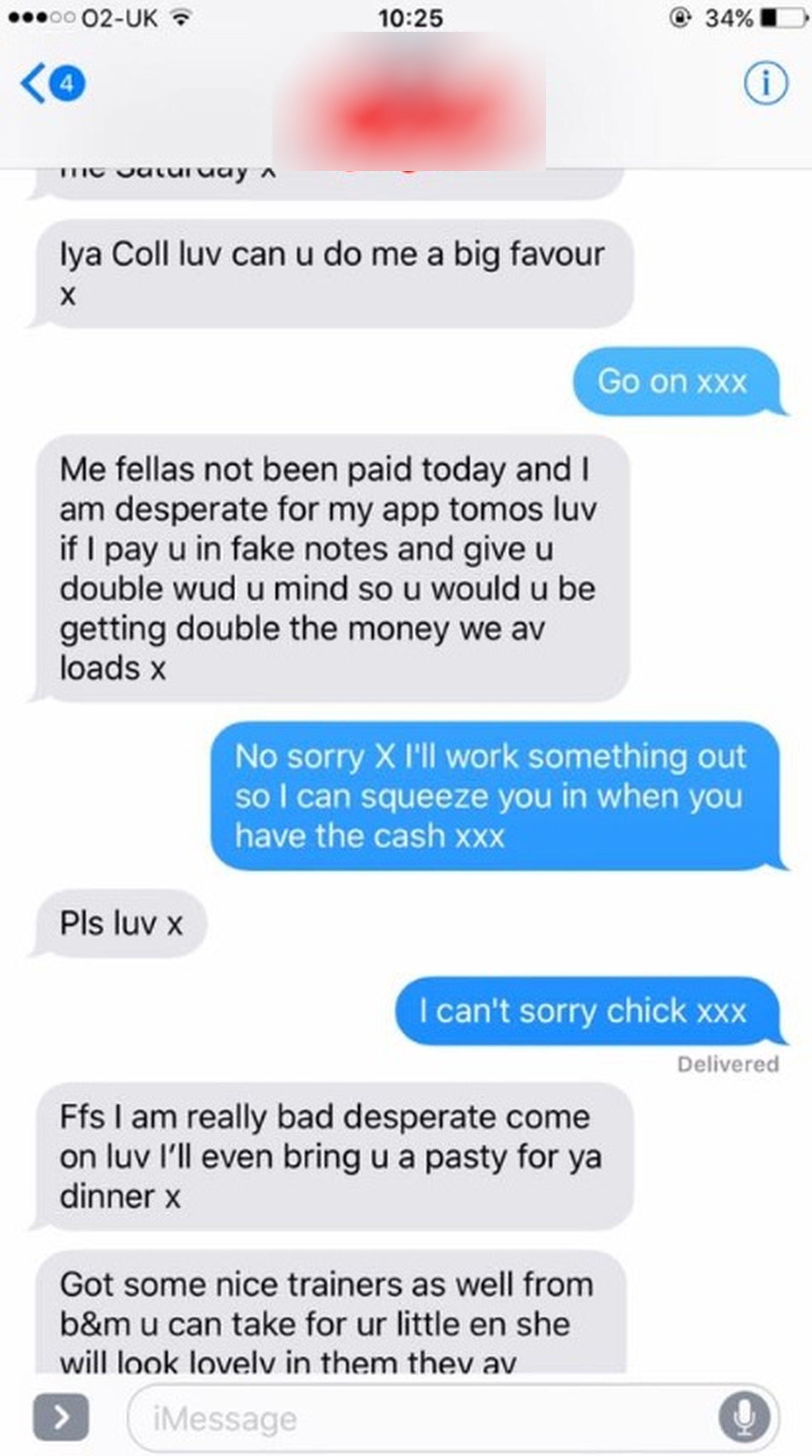 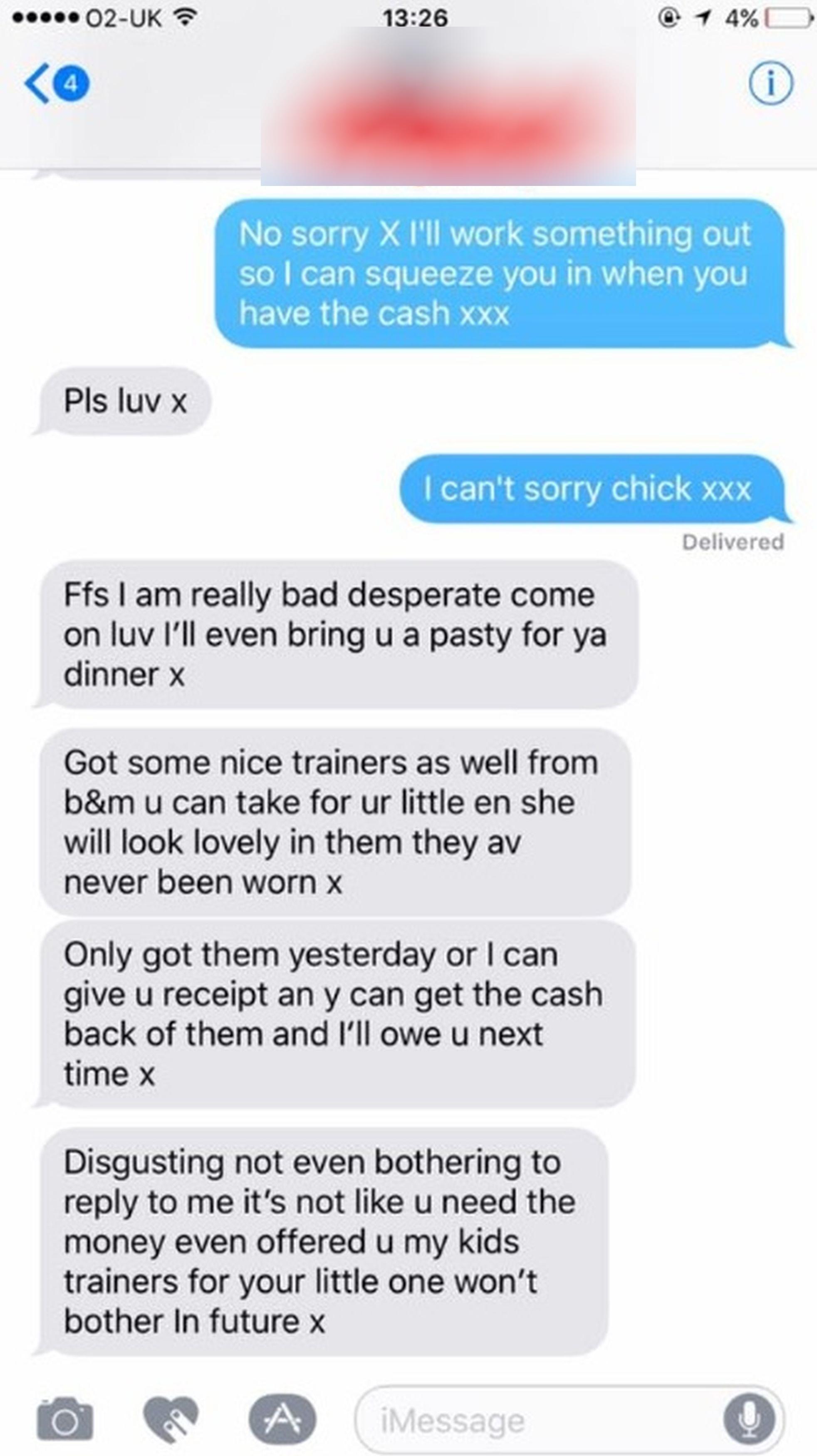 Coll, from St Helens, Merseyside, said: “I was shocked when I saw the messages. She’s being serious, it’s 100 per cent brazen.

“I would obviously never take fake money, I want paying in real money.

“We do get people that ask can we do treatments on tic [on credit]. You wouldn’t take a basket of clothes to a till and ask for that without paying, it’s ridiculous. 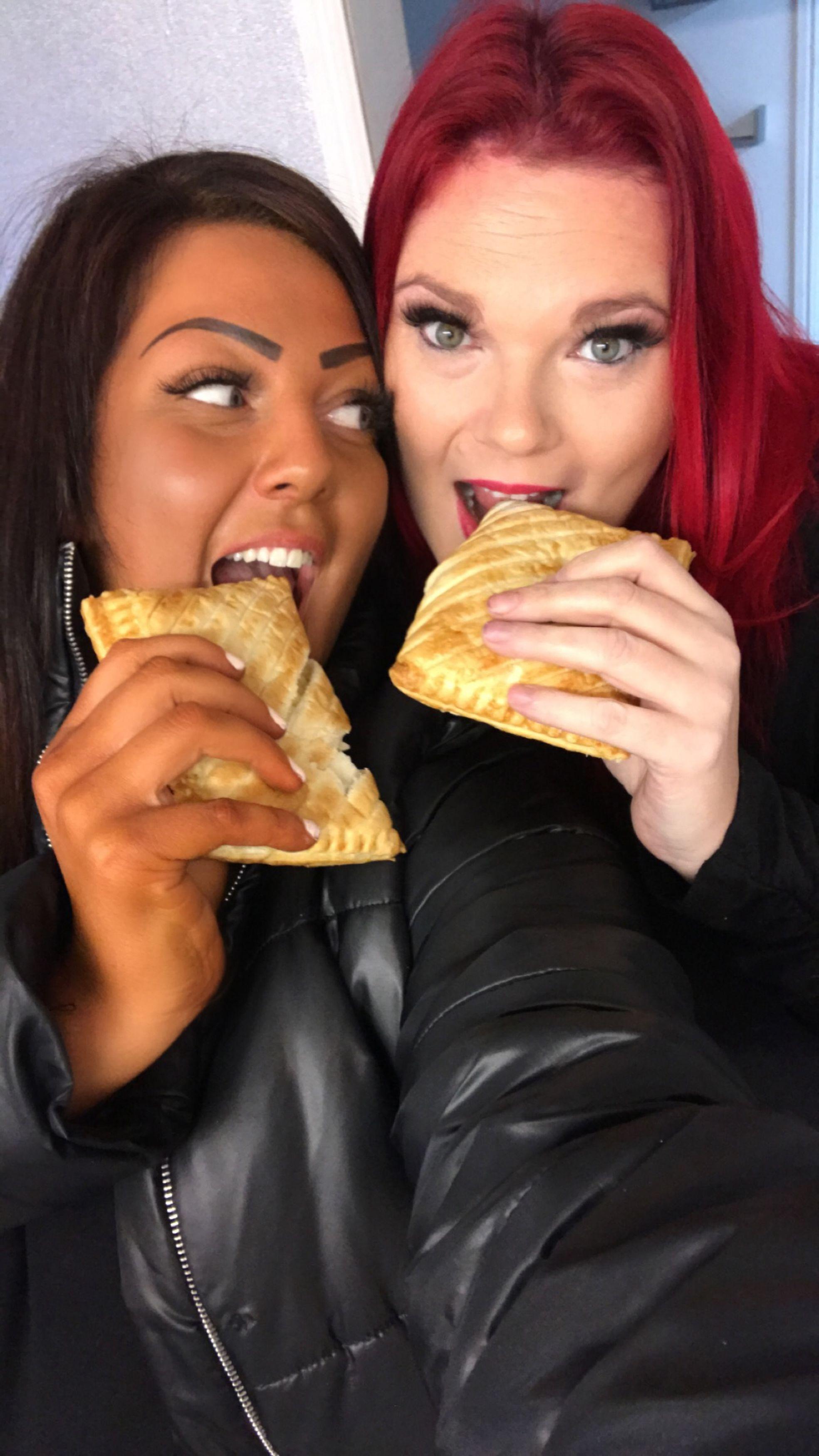 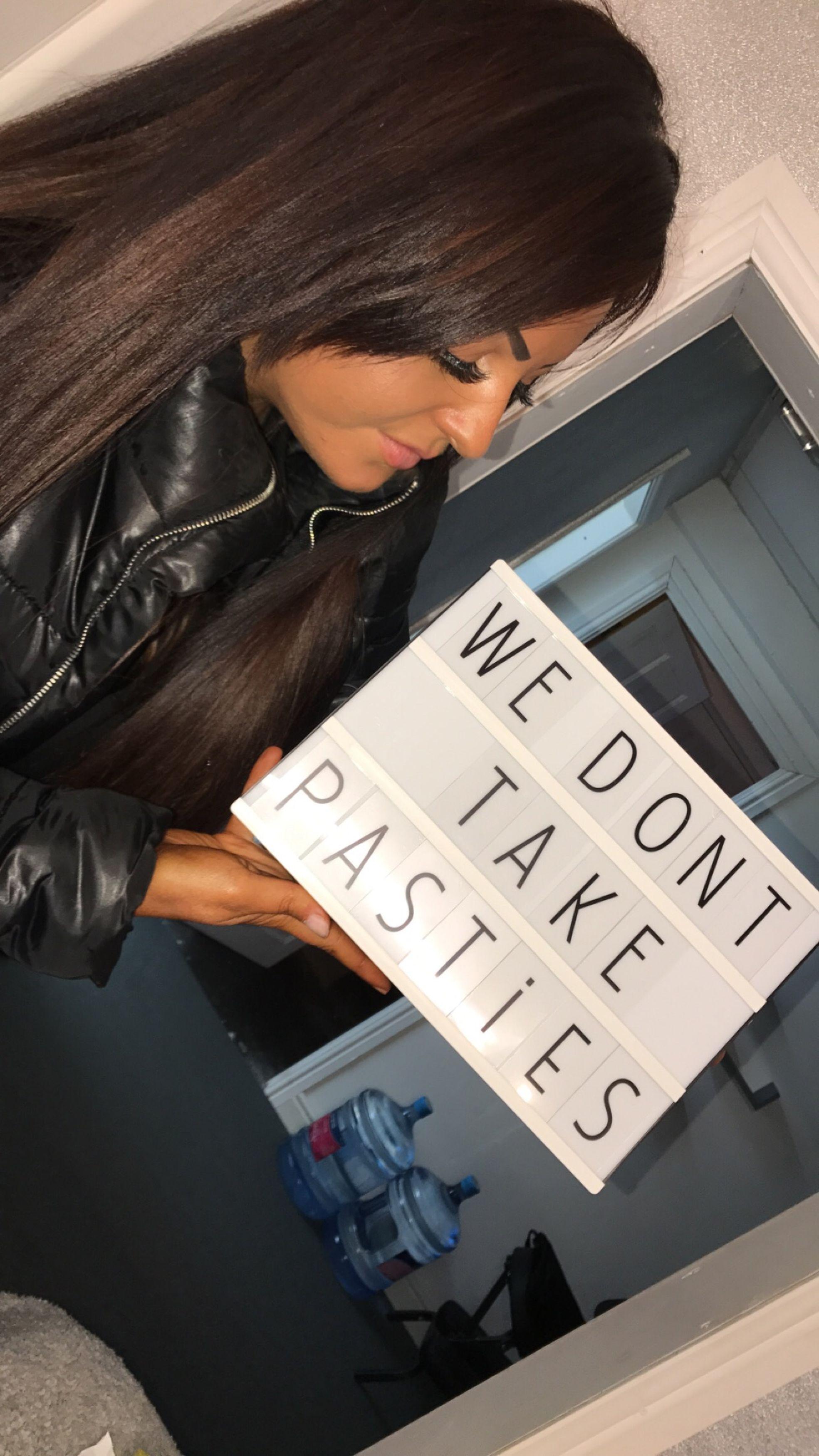 “Since I shared the messages about this different people have been in touch and it sounds like she’s been trying it on at beauty salons round Wigan.

“I shouldn’t have been surprised as you wouldn’t believe the messages we get as a business when it comes to paying, it’s horrendous.

“We had someone in a few weeks back who ‘forgot’ their money and the boyfriend offered to give us his Rolex watch.

“It obviously wasn’t real you could tell as it was off-gold, that’s the kind of stuff we deal with. We never did get the money for that treatment.”

Her bizarre texts in full:

Customer: “Iya Coll luv can you do me a big favour x”

Customer: “Me fellas not been paid today and I am desperate for my app tomos luv if I pay u in fake notes and give u double wud u mind so u would be getting double the money we av loads x”

Customer: “Ffs I am really desperate come on luv I’ll even bring u a pasty for ya dinner x”

Customer: “Got some nice trainers as well from b&m u can take for ur little en she will look lovely in them they av never been worn x"

Customer: “Only got them yesterday or I can give u receipt an y can get the cash back of them and I’ll owe u next time x"

Customer: “Disgusting not even bothering to reply to me it’s not like u need the money even offered u my kids trainers for your little one won’t bother in future x”

Coll said she didn’t reply to the last message and has since blocked the number.

The cheeky customer didn’t show up for her pre-booked appointment on Friday morning.

Coll said: “There’s no way I was taking fake notes so by the time the later messages came in I was ignoring her.

“Thank god she didn’t turn up at 9.30am as planned, we would have had to turn her away.

“She’s been here three or four times before but she won’t be coming back.

“If she would have messaged me and explained she had no money I would have been quite lenient with her, but admitting to having fake notes is bad.” 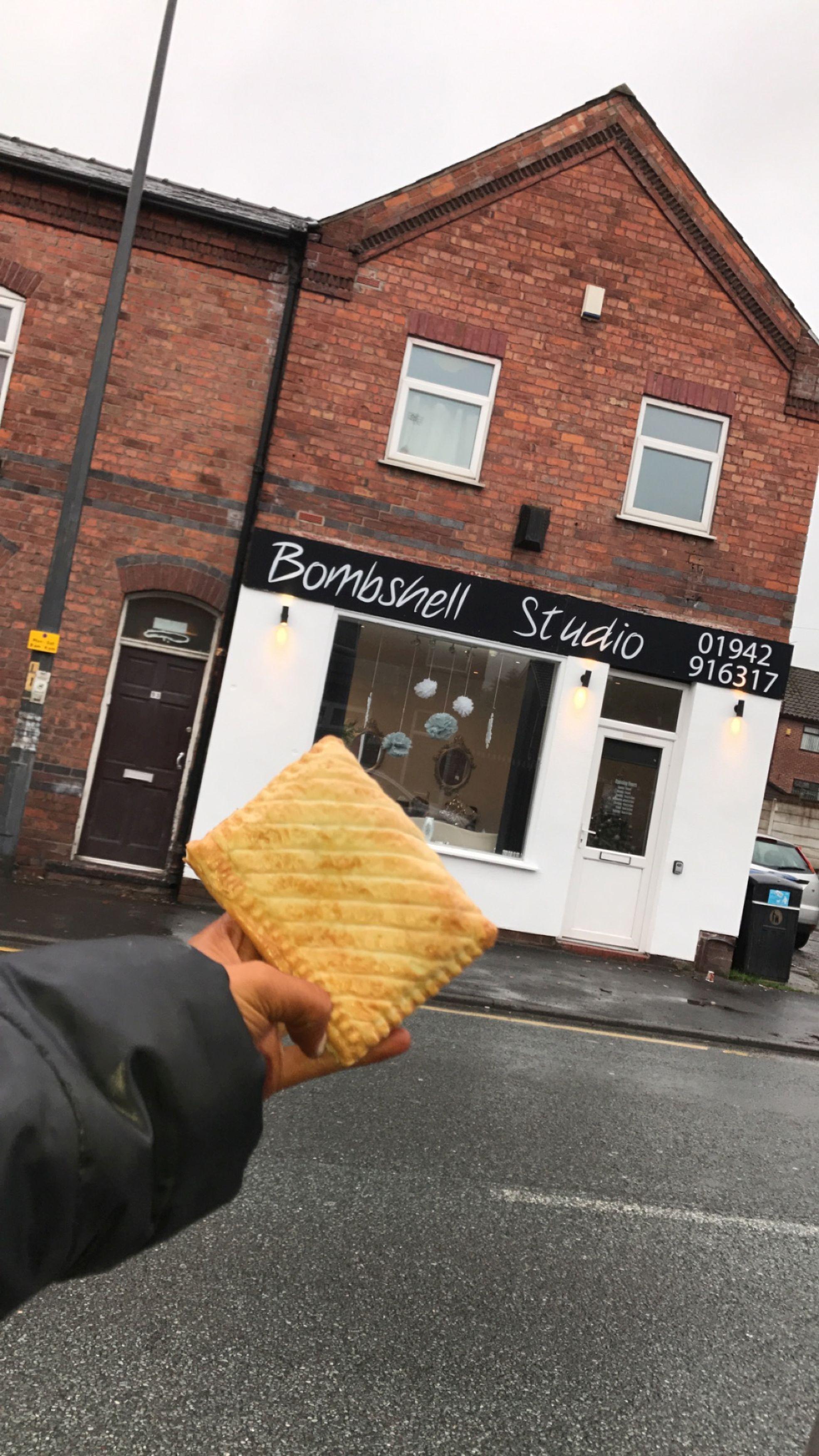 Coll joked: “If she’d have brought me a cheese butty from Galloways that might have swung it.”

She said: “We have plenty of paying customers so definitely don’t need her custom.

“Since I posted about what happened I’ve received multiple offers from people offering to buy me a pasty.

“We had originally organised a prosecco and mince pie event but now we’re having a pasty party with prosecco.”

Student who lost her sight for two hours after her false lashes were stuck on with NAIL glue shares eye-watering video.

We previously shared a similar case of a backstreet beautician who used SUPERGLUE to apply eyelash extensions.

Meanwhile, a beauty salon was slammed on social media after it advertised for a receptionist with OCD.