A COUPLE who never planned to have any children now have a huge brood of eleven.

Joseph Sutton, 35, and wife Nicole, 30, live with their eight daughters and three sons in their three bedroom home in Aspatria, Cumbria. 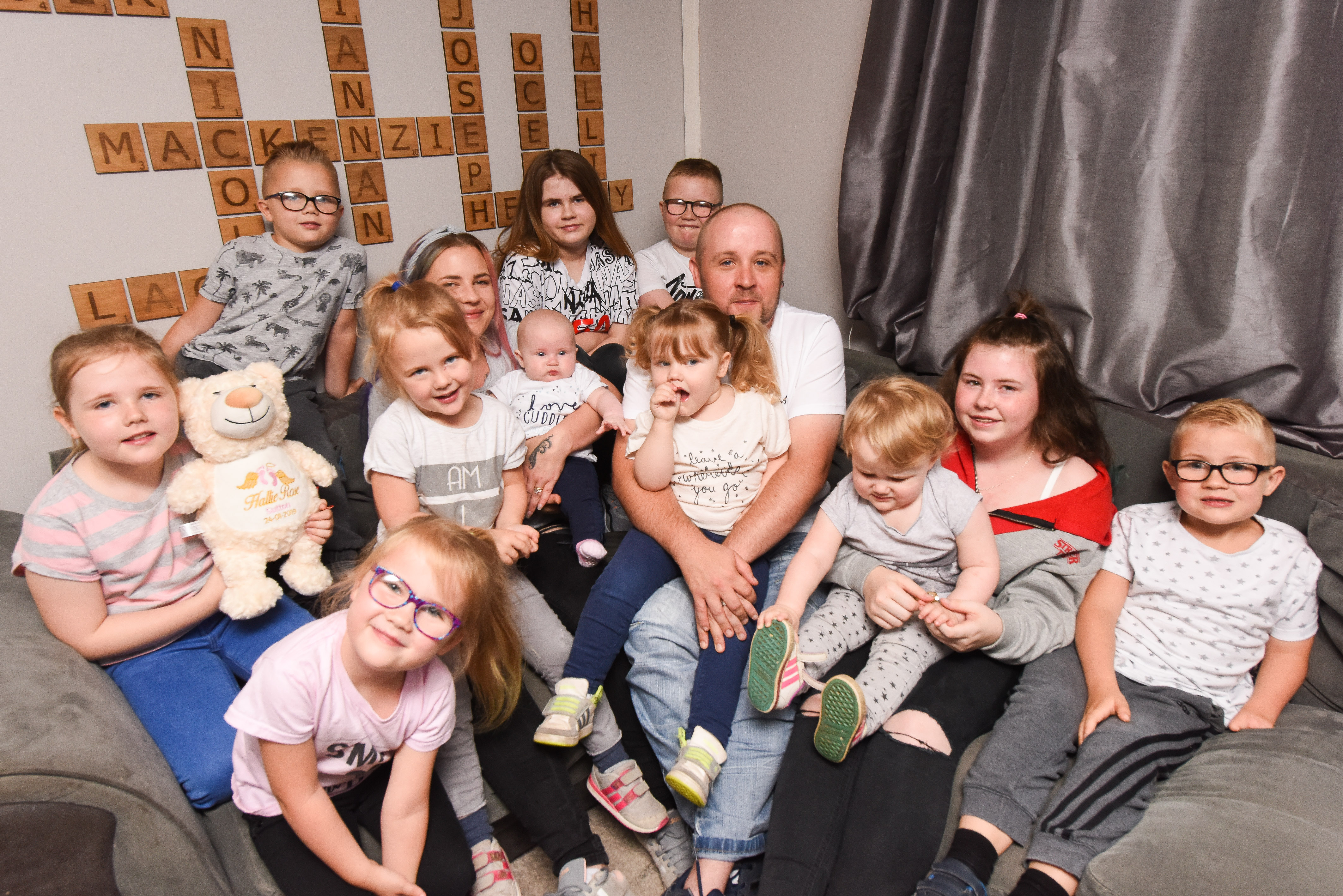 The couple envisaged a quiet life – and the thought of children never entered the equation when they met back in 2005.

But after falling pregnant with daughter Rhiannan, now 14, the babies just kept on coming.

And even though dreams of fancy cars were swapped for a 17-seater mini bus, the couple say they could never have imagined being so happy, and love their big family.

The pair, who don't rely on any benefits apart from normal child benefit, fit in looking after the family around their jobs – with Joseph working as a coach driver and Nicole as a part-time shop assistant. 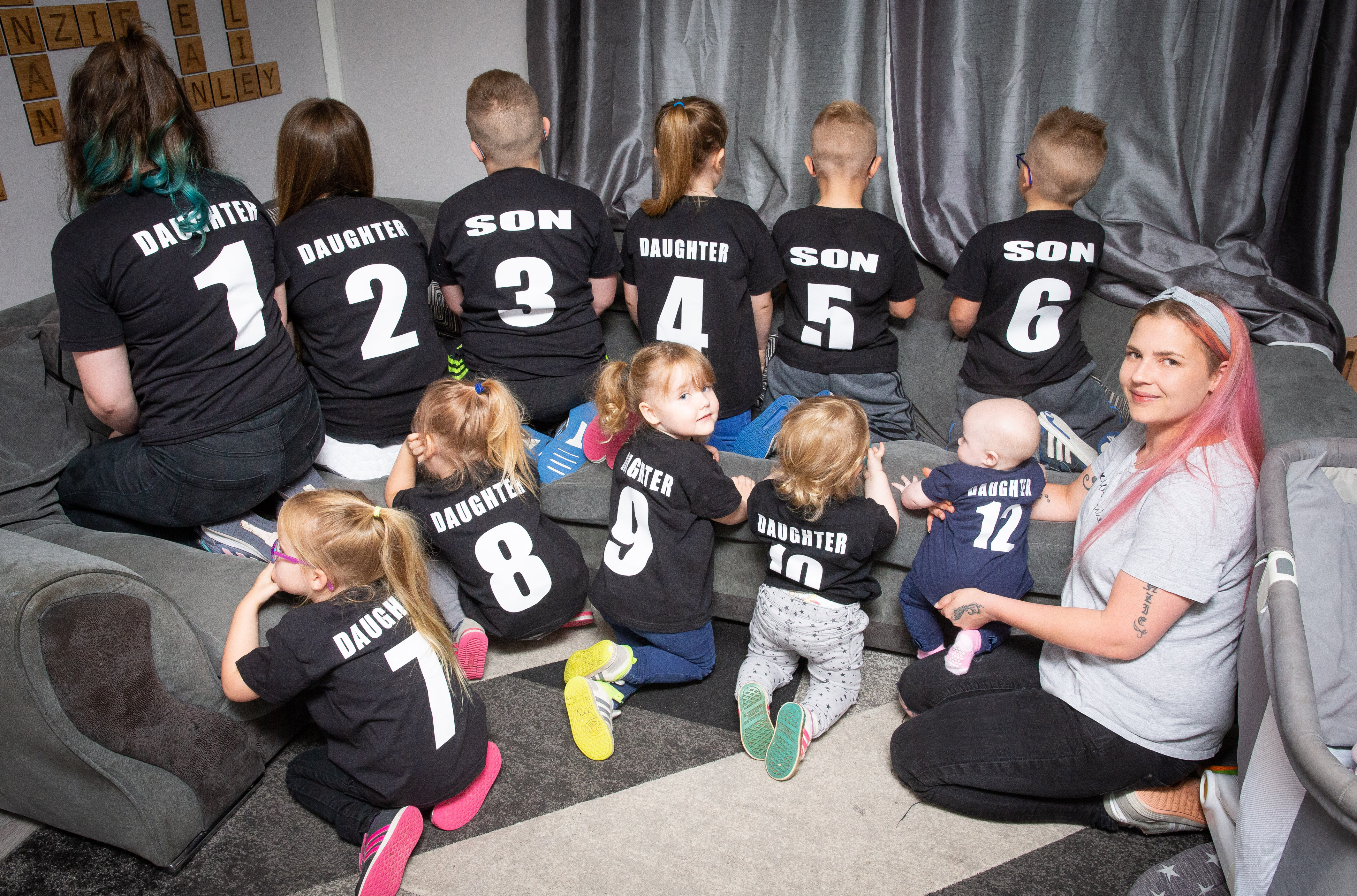 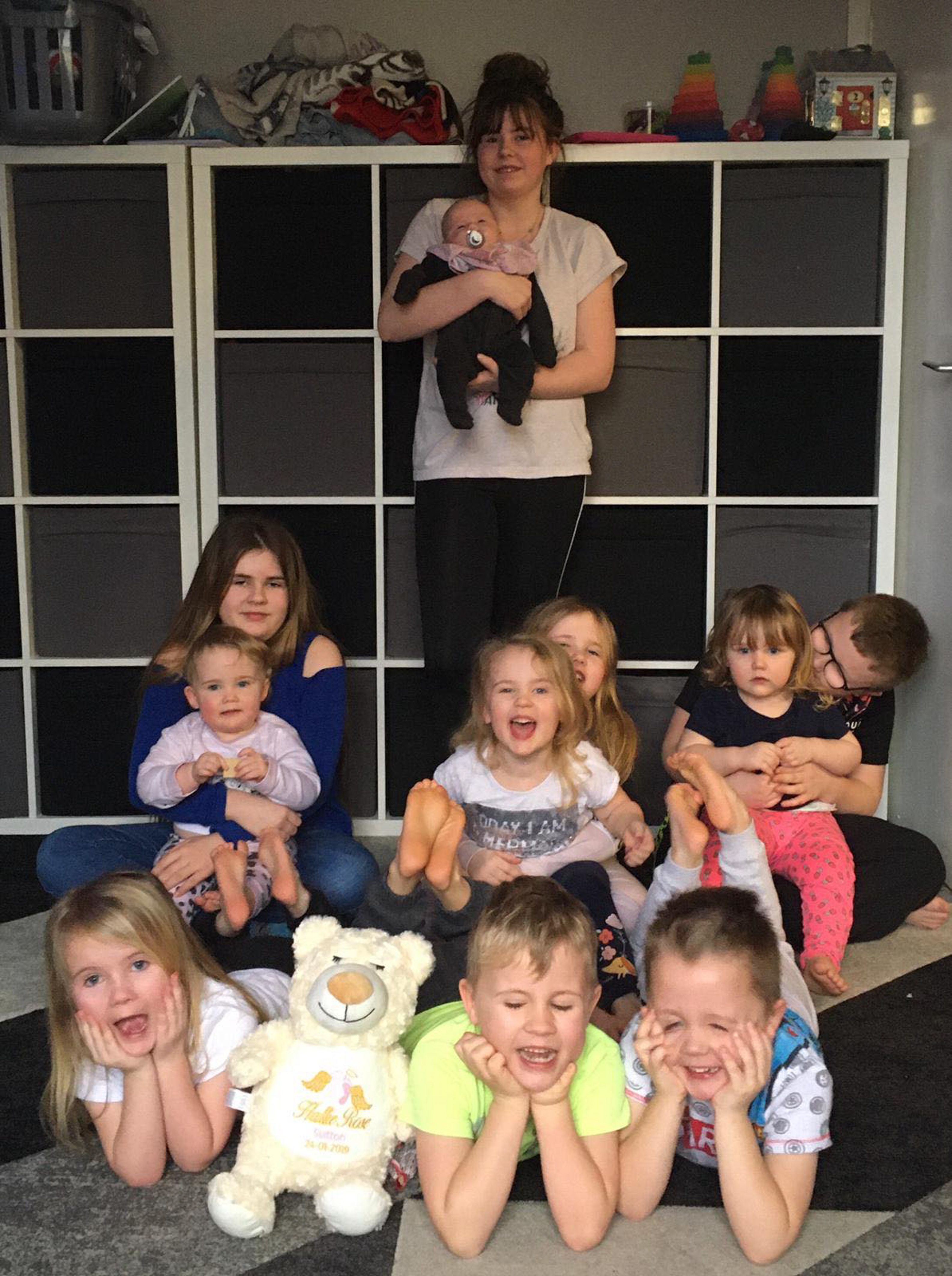 Joseph said: "We never wanted a big family, I didn't even want children.

"I don't know what happened but I am glad I've got them all, it's good fun.

"It's a mad house but I wouldn't change it." 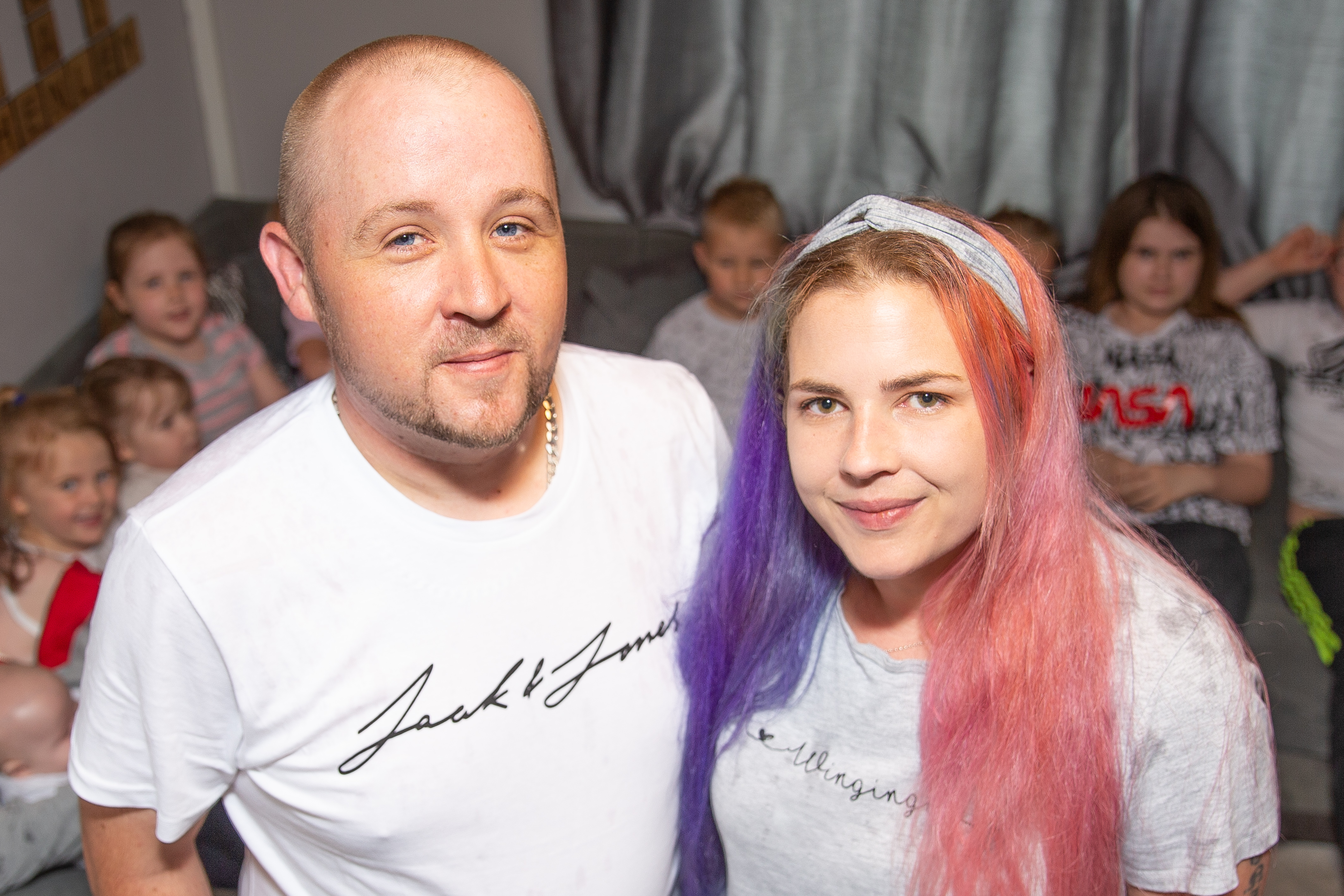 Nicole added: "Shocked was my first reaction when I found out I was pregnant with Rhiannon.

"I had the contraceptive implant so I never expected to fall pregnant.

"We didn't find out until I was already four months gone. I took a test because I was putting weight on but I never thought it would be positive.

"I had no idea how we would manage but any child is a blessing so we just rolled with it. 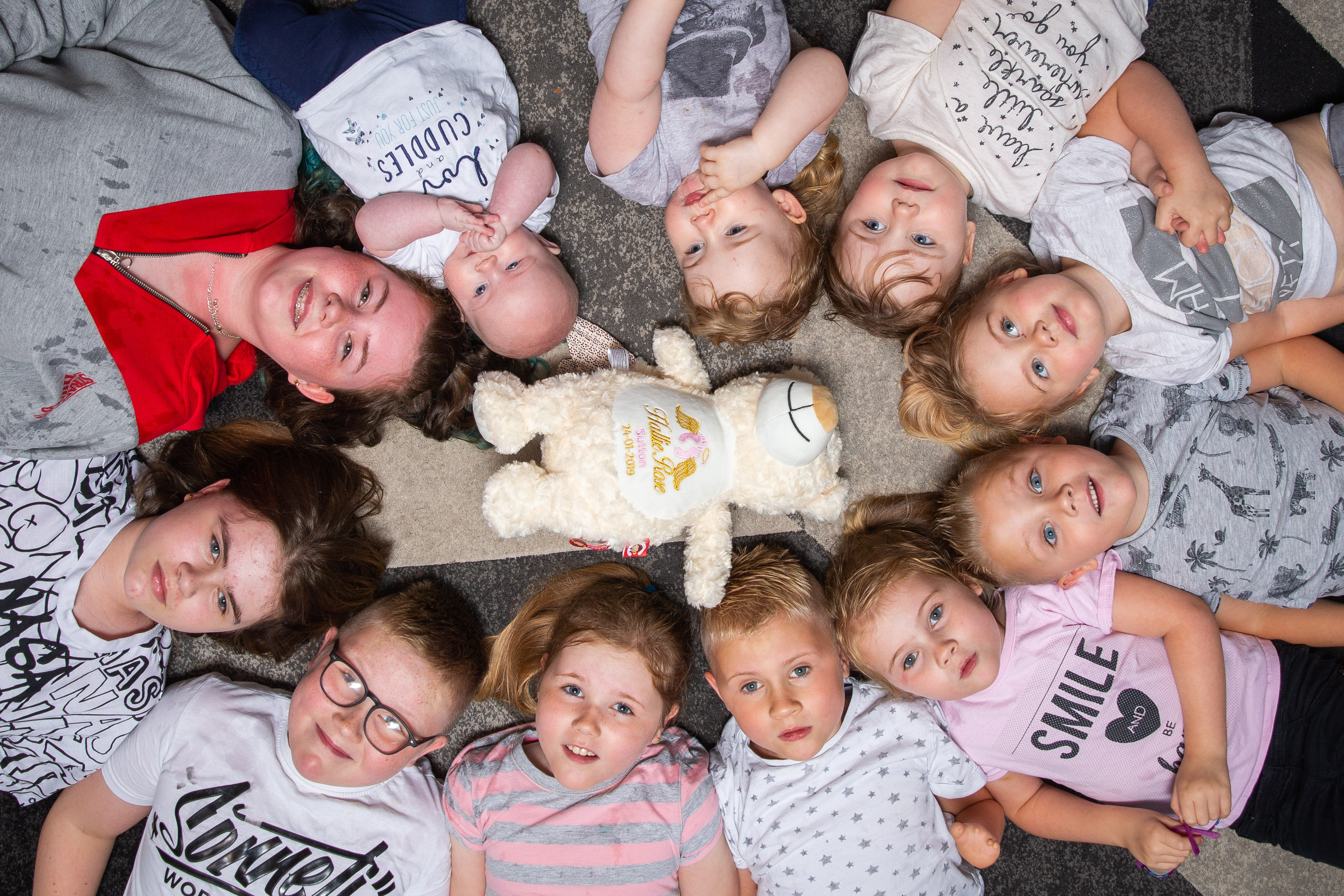 "After I had my first baby I just found I loved being a mum so much and looking after my daughter.

"I'm not close with my family so the more I had, the more I loved it."

The pair say their big brood attracts attention when they go out of the house and mum Nicole has made t-shirts with numbers on to make sure they are all accounted for.

The family fork out £1500 a year on school uniform alone, but live with all their children in a three bedroom house – after converting one of the downstairs rooms into a bedroom. 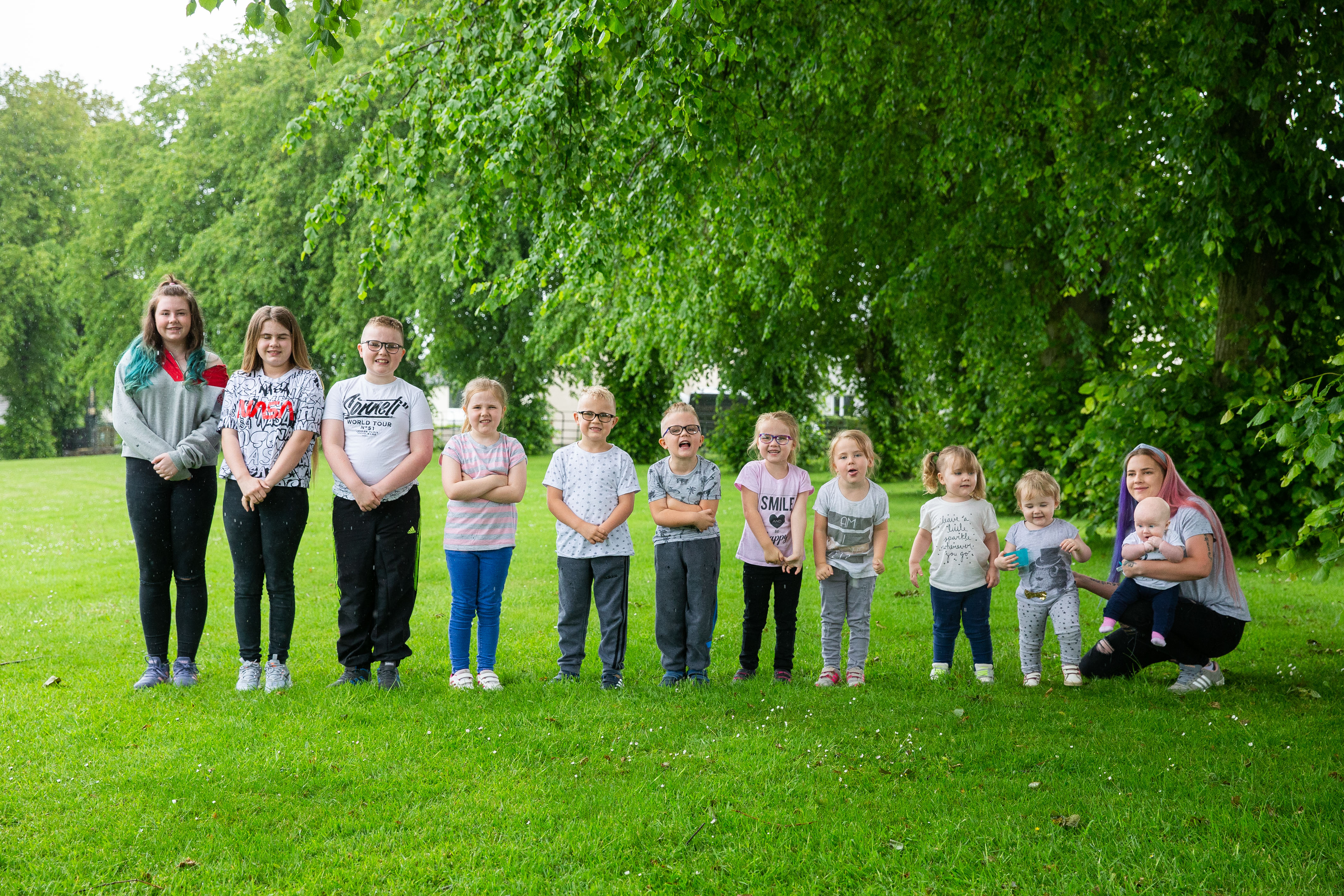 Nicole said: "When we're out I'm constantly head counting without even thinking.

"I just see us as a normal family with a few extra running around.

"Parenting is the same for us all whether we have one or 12, we are all just doing our best."

Joseph added: "We always get comments.

"On the school run Nicole gets asked if they're all hers.

"People pull faces sometimes when we're out but we don't take much stock of it anymore, it doesn't bother us.

"When people at work ask how many kids I've got they say I'd be better on the dole than working so we can't win.

"They don't know how I work and take care of them all but you've got to, you need to work and I've always worked.

6AM: Wakes up for an hour of quiet time

7AM: Wakes up children to get them ready for school

8.30AM: Takes nine children to school

9:30AM: Starts washing and drying clothes

10AM: Hoovering and cleaning

1PM: Next load of washing and drying

4PM: Hoovering and tidying up toys before starting dinner

5PM: Joseph gets home from work

7PM: Youngest children go to sleep and Nicole sets up toothbrushes, uniforms and breakfast dishes for the next day

"It was our choice to have them."

Organised mum Nicole lays out toothbrushes, school uniforms and dishes for breakfast in the evening, wakes up at six before getting the children up at seven to spend an hour dressing the eldest eight kids, doing the school run and spending the day with the youngest three.

Nicole spends half an hour making 12 beds, washes three loads of washing a day and hoovers five times every day.

All food shopping is done online with an average of 12 baskets being delivered weekly. 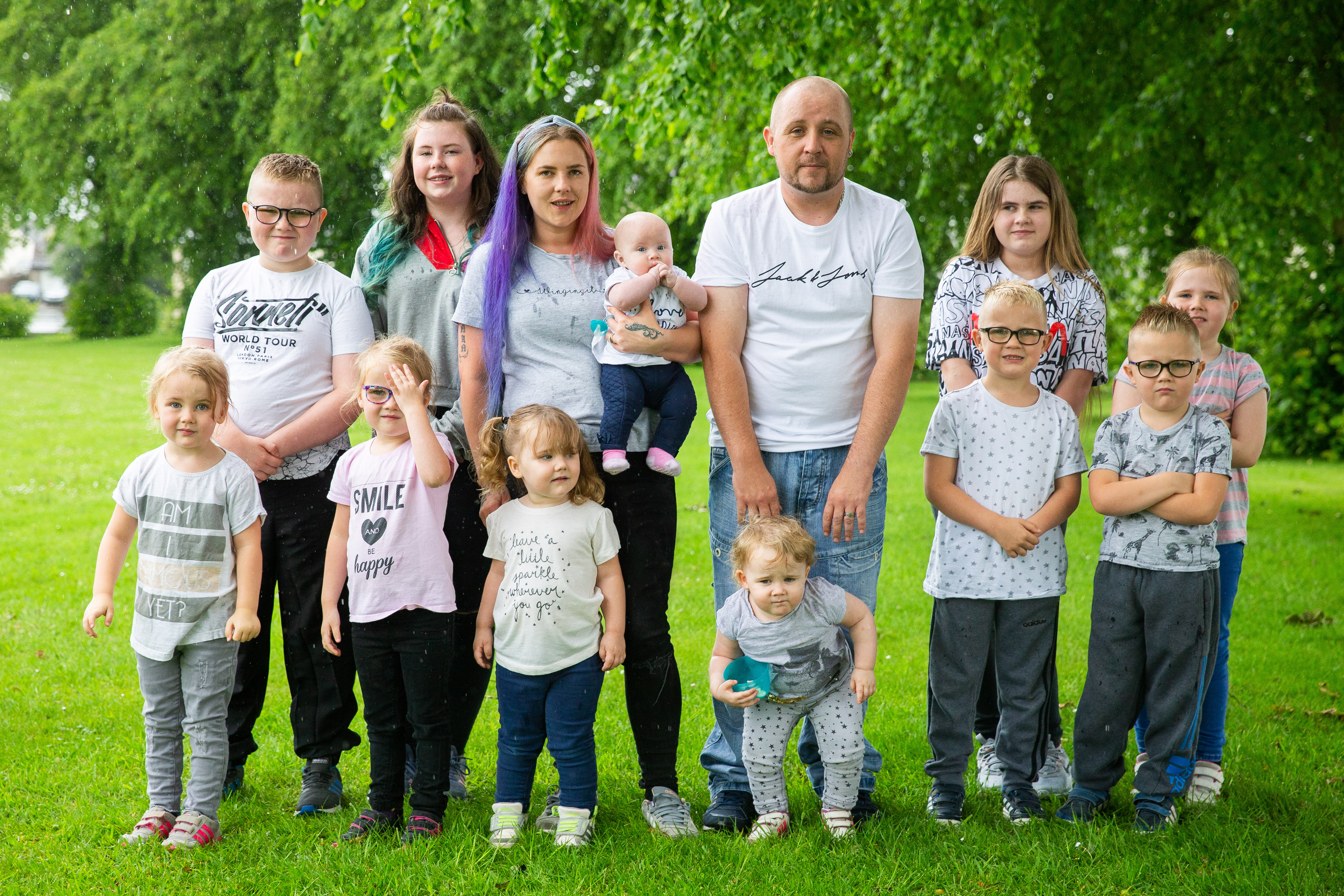 Nicole said: "It's all about routine, everything is laid out the night before, uniforms, toothbrushes, dishes.

"I gave up on ironing years ago and just use the dryer.

"I pick the kids up and we eat at five so I set the plates out while dinner is cooking and assign everyone to seats.

"Six fit at the table in the kitchen, three in high chairs and the rest sit on the sofa for some peace and quiet.

"I make huge batches of spaghetti Bolognese and roast dinners so every meal is like Christmas dinner but sometimes I'll chuck in chicken nuggets and chips. Don't we all. 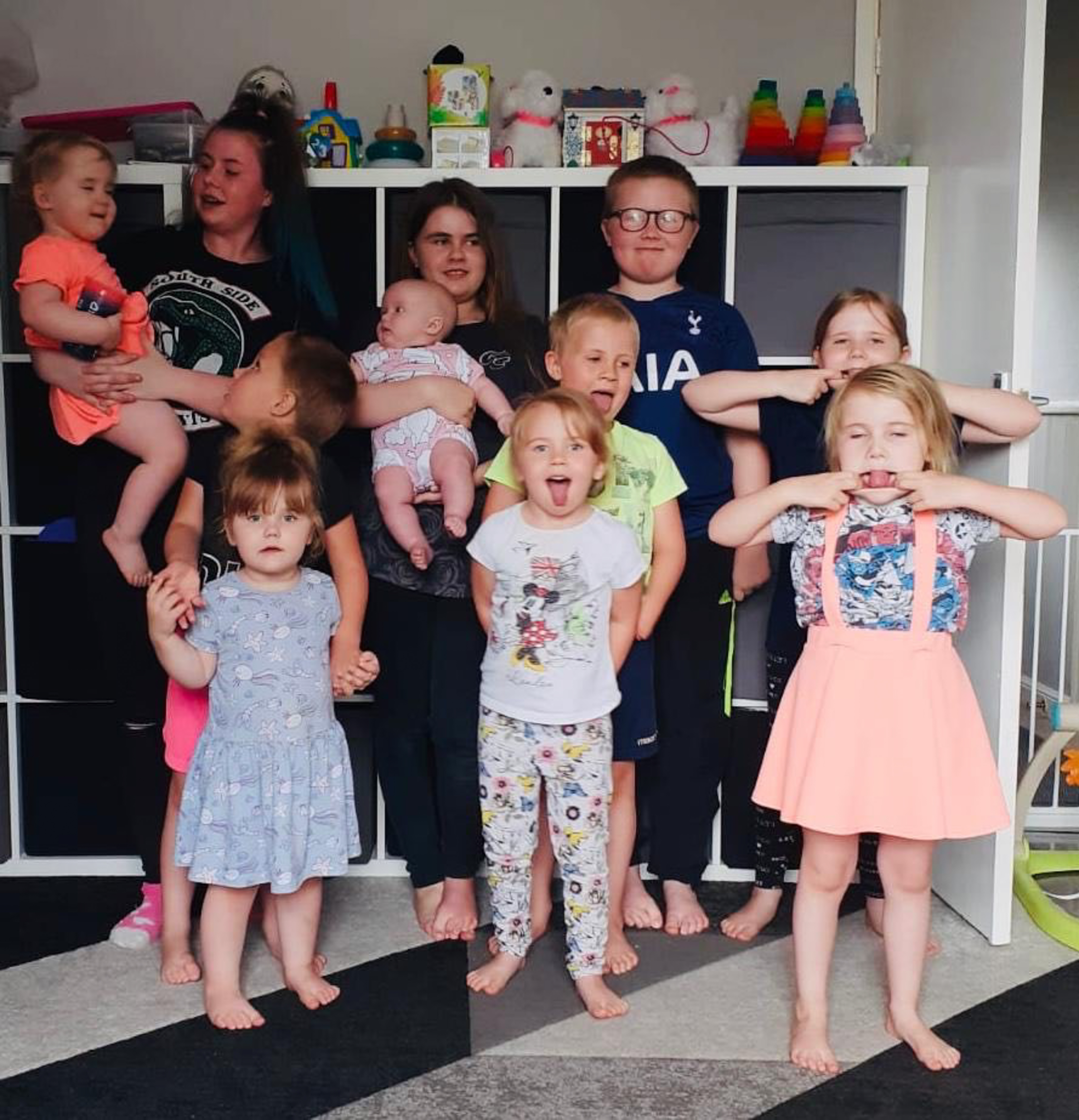 "Picking up toys is constant and Joseph does the bath and bed routine because he leaves before the kids wake up so misses all the action.

"Friday is usually the worst washing day because I have to do the PE kits so that's an extra two washes and Saturday is bed changing day so there's even more washing but it's all fun."

Joseph bought his own 17 seater minibus to ferry his family around and when they go on holiday, the tribe take up two apartments.

He said: "We've had to turn one of the downstairs rooms into a bedroom.

"Meal times are hectic, Nicole cooks big batches of homemade stuff and the washing up is terrible.

"It's never ending and it takes around an hour to get them all ready for school, then we pay around £1,500 for school uniforms because Nicole likes to buy everything new.

"Our food shop costs around £200 a week and we never run out of food in this house.

"Nicole is superwoman, I don't know how she does it."

After having their youngest, Navy, five months ago, the couple, who have been together for 15 years have decided not to add anymore members to the family.

Joseph said: "We aren't planning on having anymore, I think we've got enough and Nicole has made the decision that we don't need anymore.

"When we had Navy, it didn't really make a difference having another one apart from space wise.

Nicole is superwoman, I don't know how she does it

"In lockdown, people ask how we're getting on and say they wouldn't want to be looking after them.

"Some days its harder than others when we're tired but they're in a routine and they all get on most of the time, like any brothers and sisters."

Nicole added: "I decided Navy was the last because I didn't enjoy bring pregnant anymore after losing Hallie.

"Lockdown has been brilliant because we haven't had to have as much routine and we're not rushing to get out of the door.

"We're having BBQs or lazy movie days and we're making memories because we'll never get this time again.

"Nobody is ever bored, that's for certain."

In other parenting news, this mum live streamed her water birth at home, and even the dog came in to have a look.

And we told you how mums are giving their babies eggs to hold in a new TikTok trend.

Plus, this mum was shamed for giving her 12-month-old KFC.