A PROUD mum has been mocked for sharing photos of a “relaxation station” she created for her teenage son's room, which included tissues, hand cream and a TV remote.

The anonymous Australian mum posted photos online of the decadent shelf – but was quickly told by internet users that the tissues wouldn’t be used for a “runny nose”. 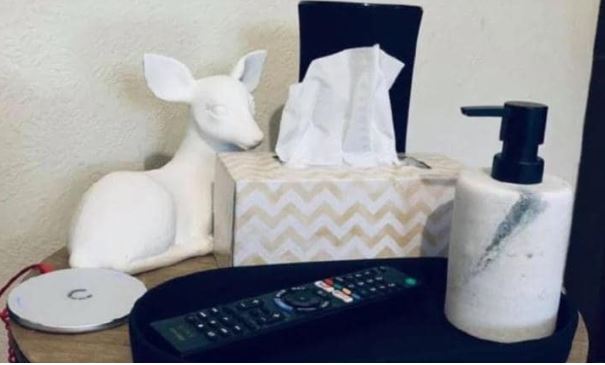 The mum wrote alongside the photos on Facebook: “I love this hack! I just bought a Kmart soap dispenser and bathroom tray to use as my son's relaxation station.

“He likes to watch internet TV in bed and he has a chronic runny nose (tissues for days – I think it's the air con!), and he had problems with dry skin and goes through heaps of hand cream, so I put some Sorbolene moisturiser in a marble soap dispenser.”

To make matters worse, she added: “Hopefully this will last longer.”

The well-meaning mum continued: “Now he has everything he uses all in one spot. He's also got his speaker and a lamp and a phone charger there. 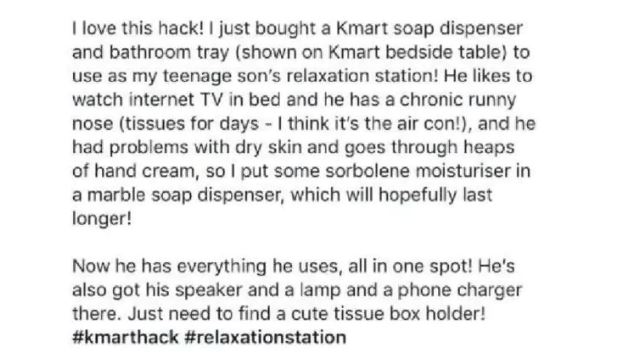 “I just need to find a cute tissue box holder!”

Despite her kind thought behind the “station”, people were quick to point out the obvious – the cream might not be used to moisten his hands.

Another added: “Oh goodness, that aint snot in the tissue babe.”

However, one mum thought it was a great idea, and wrote: “As a mother of three boys, I feel like I should do this in the near future too.”

Previously we shared proud mums showing off the hilarious pranks they’ve pulled… but their children don’t always find them so witty.

And a mum's ‘Elf on the shelf’ prank backfired and had to send son to school with inked moustache and glasses on face.

Kids share groan-inducing photos of the best ‘dad jokes’ – and they’ll leave you shaking your head.

Frank Ocean’s mom remembers her late son Ryan Breaux
We and our partners use cookies on this site to improve our service, perform analytics, personalize advertising, measure advertising performance, and remember website preferences.Ok