A COUPLE have been slammed for their “trashy” baby reveal, where their toddlers were roped in to joke about “pulling out.”

In the photo, which was shared on Reddit, the mum and dad’s existing children can be seen sat next to a sign displaying the… er… good news. 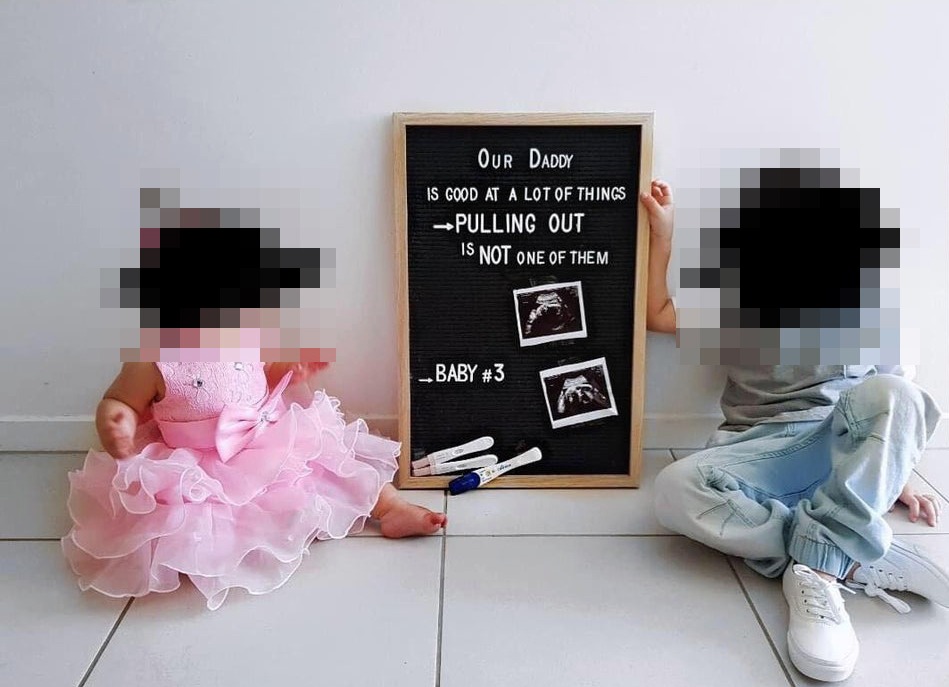 It reads, “Our daddy is good at a lot of things. Pulling out is not one of them. Baby #3.”

The message has been accompanied by three positive pregnancy tests alongside the scan photos from the sonogram.

Fellow Redditors were left outraged over the “cringeworthy” birth announcement, sharing their thoughts in the comments.

One wrote: “Imagine being those kids viewing this ‘kodak moment’ photo as adults and facepalming hard. And not in the funny way either.”

Another agreed adding, “It's not even really funny, at least to me, it's just another s***ty pull out joke. Only this time with kids.”

“So gross” one simply put, while a fourth wrote, “Ew.”

The video was shared on the subreddit r/Trashy.

The group has over 2.2 million members and is described as a place for "trashy stories, trashy glamour, all things fake, plastic and downright trashy."

In other parenting news, this mum hit back at critics over wrist locks that stop her kids "getting abducted."

We also shared how a mum was savaged after posting photo of her toddler drinking beer – then hits back that it’s not like she’s ‘shooting heroin’.

Plus a mum reveals how she gets viciously mum-shamed for ‘dumping’ her kids on her parents with people saying she's lazy but that she doesn't need the break.