My daughter and I dropped in to the local pub the other night.

Sitting out on the balcony, the evening sliding across the harbour beneath a lavender sky, I had a beer. Every cold bubble sprang on my tongue as if it were the first.

I do not relate this to make locked-down Melbourne readers envious, but to point out that small pleasures have become significant in ways that once, before the virus, wouldn’t have rated a passing mention.

We feel privileged, out here in the regions, to know that having beaten down the numbers, all of a sudden we can do things like drop in to a pub, even if numbers are limited to 10 people per room.

Only a bit over a week ago I experienced an unanticipated cheerfulness to see locals sitting outside a favoured cafe, sipping coffee and nibbling cake, where for months they had shuffled in masked lines for takeaway.

Freed from the long edict that there were but four reasons to leave home, I took a long motorcycle ride.

Out on flatlands shone fields of gold. Crops of canola are a glad sight any time, but right now the mere right to travel to see them shining has the ability to send the mood soaring. 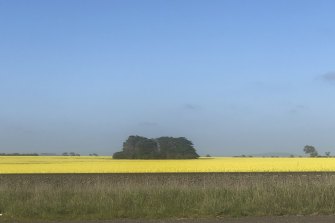 Canola in a field in western Victoria this week.Credit:Tony Wright

I thought of another daughter and her partner and their baby shackled in Melbourne and how their hearts – and those of millions like them – might swell to just about bursting at such a sight.

And yet, my daughter sends pictures daily now of my granddaughter on the swings at a playground opened a couple of weeks ago, after months of being chained. The baby’s smile is a mile wide. And just a week ago, the little family found a quiet park and laid out a blanket and enjoyed a picnic.

The virus has taught us many things, not least that there are differing ways to view the meaning of freedom.

There are those who want to believe that freedom means the right to do as you please. It’s always been a seductive idea. It drove a flower-powered movement in the late 1960s that was a whole lot of fun while it lasted.

But it ignores the wider burden of living as a member of a society. Call it responsibility.

I was a cadet journalist in 1970 when the state of Victoria became the first in the world to legislate the compulsory wearing of seatbelts. The road toll that year was the worst in the state’s history: 1061 people died in vehicle smashes, or more than 30 deaths per 100,000 of the population. 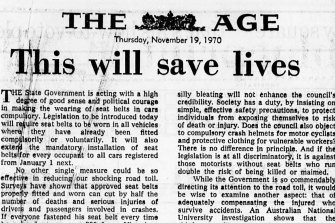 An Age editorial on the world-first introduction of legislation mandating the wearing of seatbelts. Credit:Age archive

There was, from a short-sighted section of society, an outcry against authorities dictating behaviour in your own car, backed by dark theories that in a crash you could get trapped by a seatbelt and burnt alive.

According to dissenters, the state wasn’t just taking your liberty, it was potentially condemning motorists to a terrible death.

The outrage dialled down when deaths in vehicles decreased dramatically, with a consequent and lasting reduction in pressure on hospitals, not to mention grieving families. Soon all states in Australia and most countries around the world had followed Victoria’s lead.

Freedom to ride in a car without a seatbelt was judged to be subservient to the effort to save lives and ease pressure on the health system. 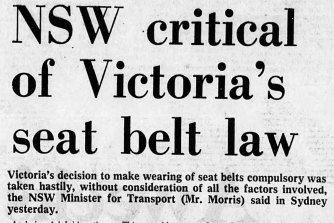 The seatbelt law had its critics but has now been adopted across Australia and globally. Credit:Age archive

A few years later, visiting the United States on a 1979 study tour, I was invited to lunch by a big-talking newspaperman from a local paper in what you might call the far-right end of the conservative San Fernando Valley of Los Angeles.

Climbing into his Cadillac, I reached for the seatbelt. It wasn’t there. Hanging from the roof was a short, raggedy strip of ex-seatbelt.

The newspaper boss let loose a guffaw at my confusion. “That there, son,” he bellowed, “Is what a free individual can do when governments try to infringe on our liberty.”

The US had forced car companies to install seatbelts in new cars, but hadn’t made it compulsory to wear such things – and in California, legislators wouldn’t do so until 1986.

My host had taken a hunting knife and sawn off the offending article.

I was informed later that he was a known supporter of the John Birch Society, an organisation so extreme that its founder claimed US president Dwight Eisenhower had been an agent of the Communist conspiracy.

Government infringement on liberty was a great sin to the Birchers, though cracking down on black America’s Civil Rights movement was jim-dandy.

It is possible to trace the rise of Trumpist conservatism back to the Birchers and, via social media, onwards to various mutations spreading across today’s world.

In recent weeks I found myself reminded of the big-talking peabrain who thought he was making strides for human rights when he took a knife to his car’s seatbelts.

His philosophy, it occurred to me, was essentially the same as that of assorted worthies marching through Melbourne’s streets crying for “liberty” and “freedom” from government rules that are successfully slowing the spread of a virus scything through economies and societies the world over.

Perhaps we could all do with a long cool drink on a balcony to persuade us that with patience and goodwill, rather than loud self-indulgence, this fraught period can pass with freedoms restored. Responsibly.