Save articles for later

Add articles to your saved list and come back to them any time.

Even on Dan’s Day Off after 120 consecutive press conferences, it seems unlikely the Premier wasn't tuned in to Saturday’s coronavirus briefing. 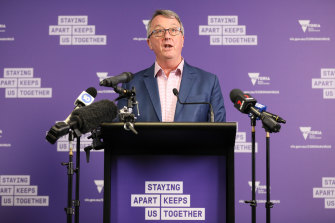 One could imagine the Premier mouthing along with every word and jolting at every aberration.

His replacement for the day, Health Minister Martin Foley, started with a clanger by Dan’s standards: “Good morning, thanks for coming along”.

Dan's ears perk up at home.

“No, Martin! You’re meant to ask if they’re all right to go!”

Soon the health minister – who shunned the North Face jacket in favour of a blue suit – was in gear. He told the press pack that November’s budget will have record investment, thanked healthcare workers then reminded us of the “swift way the virus can spread” in this “global pandemic”.

“No, Martin! Tell them it’s a wildly infectious virus. And make sure they know that just because they want it to be over, that doesn’t mean it is!”

But on Saturday, at least Daily Dan was over. 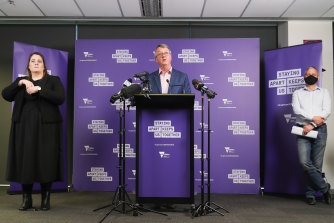 “It’s been a long year,” Uncle Brett told us. Has a chief health officer ever made such an understatement?

Indeed, the last time the media was assembled in the health department four months ago, Sutton was copping questions on hotel quarantine as cases rose into the teens. Every Victorian knows what happened next.

It’s probably unlikely, then, that Dan spent his Saturday night in a CBD hotel. By Saturday afternoon, #DansDayOff was trending on social media. In the twisted time warp of this year, should we really be surprised? Unlike Ferris Bueller, however, the Premier chucking a sickie in 2020 would carry a little more shock value.

Was he finally getting on the beers? A tinnie or two to follow his mid-week whisky, maybe. His team said he was having a private day at home. Perhaps he was lounging in an inflatable doughnut, trading selfies with Prime Minister Scott Morrison, who was kicking back on his own inflatable shark.

Or maybe he and Scotty, both fans of subcontinental cuisine, cooked a curry together over Zoom.

Saturday's questioning of Foley wasn’t harsh, in part because Victoria had just one new case on Saturday (later revised to zero), also perhaps because he was the new guy. He assured those gathered that the Premier hadn’t needed to brief him before his appearance.

“My message to all Victorians is that to stay safe, is to stay open," he said.

Dan would’ve liked that one. And there's every chance Foley will be back on Sunday, because the Premier is taking another day off.

December 2020 Will Be The Most Romantic Month For These Zodiac Signs
We and our partners use cookies on this site to improve our service, perform analytics, personalize advertising, measure advertising performance, and remember website preferences.Ok