A play about the impending death of a parent may not seem ideal fare in the run-up to Christmas. Yet both events have a sad capacity to bring simmering family tensions to the boil. 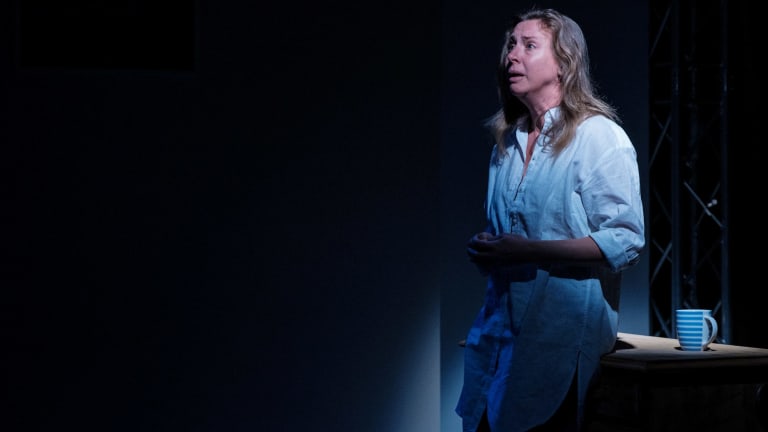 Angela Bauer is part of the fine cast.Credit:Robert Catto, Photographer

But unlike Christmas, there's no necessity for enforced jollity as the Grim Reaper beckons.

As Dad lays dying in All My Sleep and Waking his three adult children gather in his shabby house.

He's been a problematic father – a drunk, irresponsible and possibly manic depressive. His three children each view their flawed father differently.

Anne, the eldest, burns with rage. She spent her childhood parenting her parent and she hasn't forgiven him.

She walked out as a teenager and hasn't been back. Now, she refuses to go into his bedroom where he still draws erratic breath.

Instead, Anne spends her time relentlessly cleaning his house – as though trying to expunge her memories with his old books and dust.

Maria, the unmarried youngest daughter, has never left home. She's as aimless as her sister is driven. Maria has frittered away her 44 years under his roof, but is devoted to the old man and accommodating of his flaws.

Exhausted by his round-the-clock care, she marinates her sorrows in alcohol and his Endone. And is not above playing tricks on her arachnophobic older sister.

Caught in the crosshairs is brother Peter, the middle child. Unconfident and nervy, he reckons there's a bit of the old man in all three siblings.

Trying to make sense of the competing versions of the old man (who is never seen) is only grandson Josh, Anne's 19-year-old-son who has father problems of his own.

References to the animal world abound and invite reflections on nature versus nurture. How to account for three siblings so varied in their response to the same father?

When Peter and Josh flee the family to an aquarium, its giant fish tank becomes a slightly overstretched metaphor for the strange, incompatible creatures forced together and circling each other like members of one big unhappy family.

The main conflict is between the sisters – and the play avoids pat solutions – but it is brother Peter's journey that is particularly affecting.

He has been attending Toastmasters to build his shaky confidence to deliver the eulogy. When he finally does, and folds away his written speech to speak from his heart, his raw honesty and wisdom is moving.

There's a fine cast, with Anne (Di Adams) and Maria (Angela Bauer) as the temperamentally opposite sisters, Richard Sydenham as the eccentric, meandering Peter and Alex Beaman as gentle Josh, perfectly poised between late adolescence and manhood.

Dino Dimitriadis directs with great sensitivity a play full of raw emotion while bringing out its humour.

For, despite the sombre tale at the heart of the piece, it is enlivened by some bitingly funny lines – mostly given to Maria.

Mary Rachel Brown has rewritten her 20-year-old first play, and it is a short (75 minutes), sharp, finely observed piece.

While references to Facebook anchor it in the present, the struggle between siblings and their treatment by their father is as old as Cain and Abel.

Maya Keys' set – a rundown loungeroom with beige walls and a well-worn leather couch – is as frayed as the nerves of the three siblings.

There's humour, tenderness and an awareness that grief – in all its agonising shapes – is a form of love.

It is a play about forgiveness and a reminder, as Bertrand Russell noted, that life's hardest lesson is knowing which bridge to cross and which to burn.