Distribution of a vaccine could begin “soon after” a Food and Drug Administration panel meets on December 10 to consider Pfizer’s application for an emergency use authorization (EUA), Health and Human Services Secretary Alex Azar said Tuesday.

Speaking to reporters to provide an update on Operation Warp Speed, the federal government’s vaccine task force, Azar said Pfizer’s vaccine will be evaluated by the FDA’s Vaccines and Related Biological Products Advisory Committee during the December 10 meeting.

Azar also said that Deputy Surgeon General Rear Admiral Erica Schwartz has made contact with President-elect Joe Biden’s transition team and is briefing them on the task force’s plans, given the General Services Administration’s decision on Monday to kickstart the formal transition process.

The FDA’s vaccine advisory committee provides advice about whether to authorize the vaccine for emergency use, but the final decision is made by the commissioner. The agency said in a statement last week announcing the meeting that it will be able to “thoroughly evaluate the data and information submitted in the EUA request” before December 10, and will be prepared for a “robust” discussion during the public meeting.

“The FDA has been preparing for the review of EUAs for COVID-19 vaccines for several months and stands ready to do so as soon as an EUA request is submitted,” Commissioner Stephen M. Hahn said in the statement. “While we cannot predict how long the FDA’s review will take, the FDA will review the request as expeditiously as possible, while still doing so in a thorough and science-based manner, so that we can help make available a vaccine that the American people deserve as soon as possible.”

Pfizer and its German partner BioNTech announced that its vaccine appears 95% effective at preventing mild to severe COVID-19 on November 18. Days later, the company formally submitted an EUA request to the FDA. The move started the clock on a process that could eventually signal the beginning of the end of the pandemic, after a long, hard winter.

“We have an end in sight, and we have much happier holidays in our future,” Azar said Tuesday. 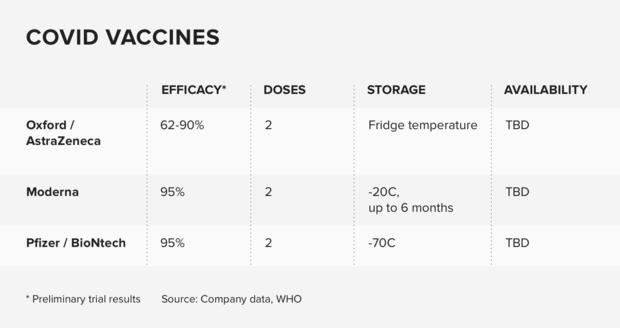 General Gustave Perna, the operational head of Warp Speed, said initial shipments will total 6.4 million doses, with a goal of 40 million doses distributed by the end of the year.

Distributing any eventual vaccine will prove to be a complex logistical challenge unlike any in recent memory. Azar said Operation Warp Speed began making test shipments to its network this week in order to ensure a “seamless logistical operation” once a vaccine is approved.

The task force has not officially announced who will be first in line to receive a vaccine, but Azar said “core groups” like health care workers and nursing home residents will take priority. He said the administration expects the general public will be able to get vaccinated “by the second quarter of next year,” but added that supply chains are in “constant progression.”

He described the federal government’s role as the “air traffic controller” of vaccine allocation, and said that governors will ultimately determine how the vaccine is distributed in each state. If individual governors feel there’s a need for more customized distribution — based on community spread hot spots within a state — “they are fully in the driver’s seat,” Azar said.

The health secretary, however, noted that current nationwide spread and susceptibility to the disease made per capita distribution the most attractive approach to the task force. “We thought it best to keep it simple,” he said.

The coronavirus is spreading from coast to coast and killing more than 1,500 Americans every day. Morgue overflow in El Paso, Texas, required the state’s national guard to be called in to help. In Ohio, more than 4,300 people were in the hospital with COVID-19 related symptoms as of Monday, a 59% increase from just two weeks ago. Hospitalizations have also surged in New York, up 128% in three weeks — from 1,253 earlier this month to 2,856.

Due to the low temperatures needed to store the vaccines, Azar said the current plan is to distribute initial orders directly from the manufacturer with 975 doses in each, followed by a second dose 21 to 28 days later. Pfizer’s vaccine needs to be stored at -80 degrees Celsius for up to 20 days, while Moderna’s vaccine can be stored at -20 C for up to 30 days.

The secretary said that the vaccine developments offer hope, but the news does not mean Americans should let their guards down — especially during the holiday season.

“We want to make sure that everybody is here for next year’s Thanksgiving,” he said.