Aboriginal and Torres Strait Islanders readers are warned this article contains an image of a deceased person.

There is a word in Yolngu language to describe the feeling you get when you see the sun set: Djapa. It's the name Danzal Baker – aka Baker Boy – has given his new puppy, who gives him that feeling every day. He got the bulldog before coronavirus hit and worried about missing him when he was touring but the pandemic put paid to that. "Now it’s kind of a blessing in disguise," Baker says.

The Darwin-born Yolngu singer-songwriter is counting his blessings in more ways than one, having scooped the pool at this year's National Indigenous Music Awards. He took out three gongs: best artist, song of the year and best video clip for the track Meditjin. 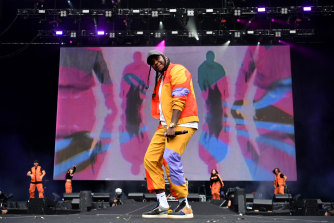 "It’s so cool, I feel blessed and honoured to be honest," Baker, who lives in Bendigo, says. "I was freaking out [to win three] and now I feel devastated … it would have been really cool to be on stage performing in front of all the people."

Baker's poppy hip hop music features him rapping in his native language of Yolngu Matha as well as English. He has been dancing all his life, attending a performing arts school after high school, and he is an original member of the Djuki Mala dance troupe.

The video clip for Meditjin, a song about music as medicine, demonstrates his fabulous moves, along with New Zealand rapper JessB. Making it was a particular highlight, Baker says, as his brother Adam and cousin Tristan travelled from Arnhem Land to Victoria to perform in it. 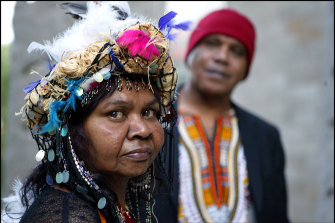 The late Ruby Hunter, a Ngarrindjeri woman who was taken from her family when she was eight and told the story of her life in her music, was inducted into the Hall of Fame. Hunter and Archie Roach met when they were 16, often performing together, and were virtually inseparable until her death in 2010.

In 1994, Hunter became the first Indigenous woman to release a solo album Thoughts Within, which was nominated for an ARIA Award.

The awards also honoured the Warumpi Band with My Island Home performed by songwriter Neil Murray and Christine Anu, who made the song a hit in 1994, alongside rapper Mau Power, Jim Moginie and Rob Hirst, plus the Malu Gubaw Kazil (Sea Breeze Children) Choir.

While disappointed to miss the ceremony taking place in Darwin, Baker is philosophical. As well as hanging with his partner and puppy, he has been listening to lots of music, including his own. "Every time when I listen to Meditjin, it’s super-energetic and it just pumps me up. I can’t wait to get on stage again and start dancing."