‘People think I’m lying about not eating meat’: Bodybuilder who can deadlift 210kg reveals his six-pack is MORE ripped after going vegan

Italian Massimo Brunaccioni, 33, from Cavaria, ditched meat back in 2011 after his love of animals – including his own dog Luce – left him wanting to try a plant-based diet.

The gym fanatic says he’s astounded by the effects not eating meat has had on him – he’s gained two stone in pure muscle and has scooped the top prize in a natural bodybuilding competition.

However, some have accused the ripped athlete of taking steroids or secretly eating meat to maintain his muscles.

Before going vegan, Massimo Brunaccioni tried to eat a well-balanced ‘healthy’ diet packed full of vegetables, white meat and fish but often found that he had low energy and would injure himself easily in training. 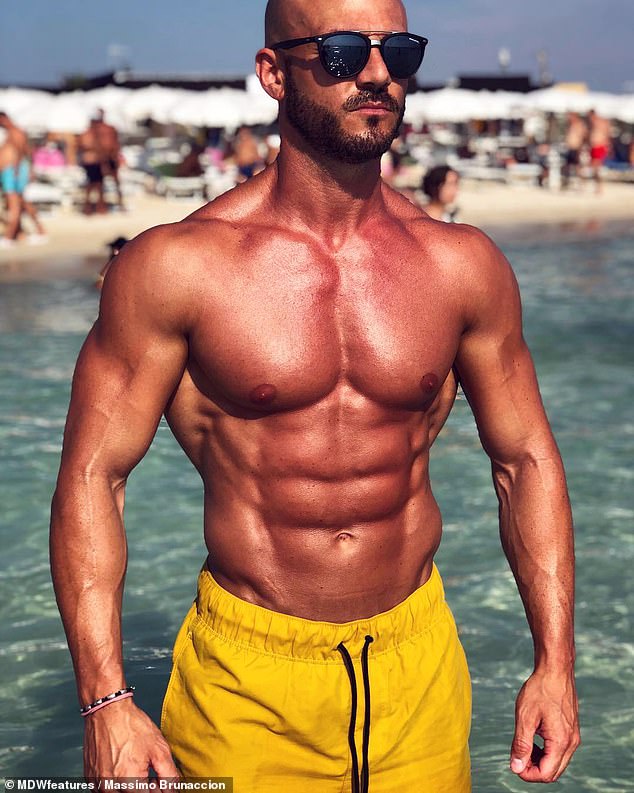 Vegan bodybuilder Massimo Brunaccioni, 33, from Cavaria, Italy adopted a plant-based diet in 2011 after deciding that his love of animals was making it too hard to eat meat 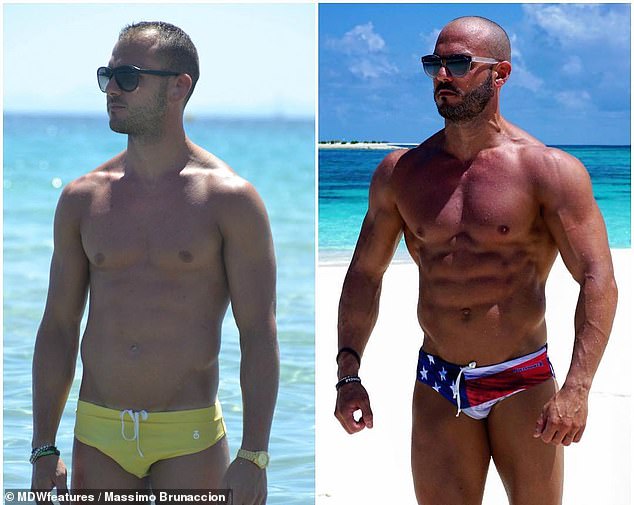 Weighing in at 10st 5lb as a meat-eater in 2011 (left), Massimo now weighs 12st 6lb (right) when he’s not competing and says he has more energy and more strength after ditching chicken and beef 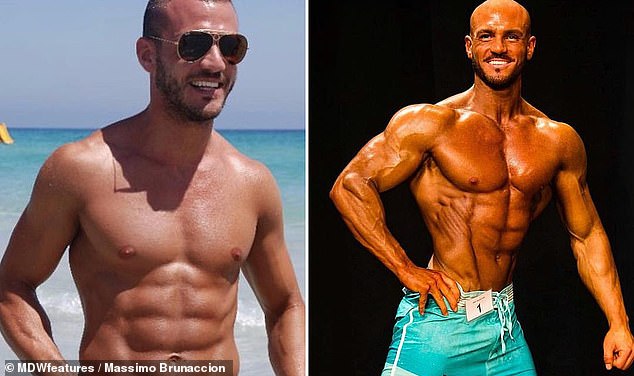 While the bodybuilder still had an impressive six-pack before he focuses on a vegan diet, his body is now more defined he says, and he can deadlift 210kg 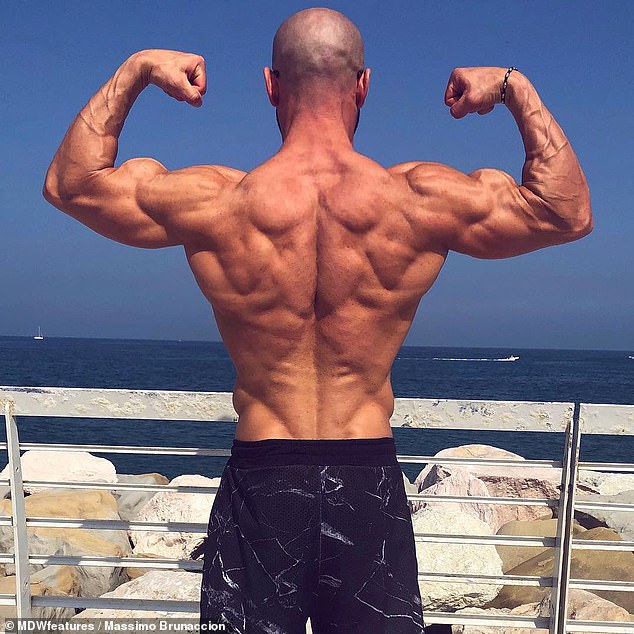 The downside? People don’t believe the results he’s achieved through a vegan diet.

When he’s not competing, Massimo consumes 3,500-calories a day and lowers his intake to 2,200-calories when he’s got a show.

Incredibly, since going vegan, he has gone from 10st 5lb to 12st 6lb off season and 11st 9lb when he’s competing.

He explains his decision to ditch meat: ‘I’ve always been a lover of animals since childhood. At one point in my life, exactly seven years ago, from one day to the next I realised that it made no logical sense to love animals and then eat them without problems.’

‘The spark for the change came when we got Luce, my golden retriever. I began to see his eyes in all those animals that I ate without thinking about it. The eyes of Luce were the eyes of cows, calves, rabbits and lambs that were sacrificed for our desires in every part of the world.

Massimo trains six days a week and eats five times a day, typically he’ll consume oat pancakes with hazelnut and jam cream and coconut milk for breakfast, followed by a mid-morning snack of fruit, porridge and a protein shake.

For lunch he has brown rice, red lentils, tempeh and vegetables and an afternoon snack of fruit, dried fruit, rye bread, jam and soy yoghurt. For dinner, Massimo dines on spelt, tofu and vegetables with seeds.

Most people are in shock when they see Massimo’s naturally honed physique with many accusing him of using steroids – something Massimo denies and says he is tested for doping throughout the year, even when he’s not competing.

He says: ‘Many do not believe it. Many say that I built my body through an omnivorous diet and through veganism I’m just keeping it up but in reality, it is not so. Some people are so incredulous that they claim that I use steroids, but this is also false.’ 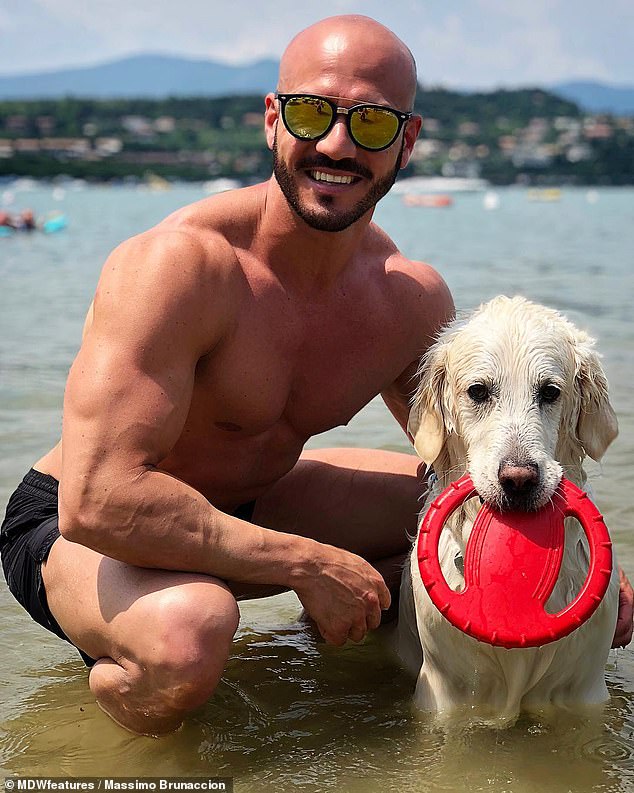 A fondness for animals led the bodybuilder to veganism; looking in his own pooch’s eyes he says made him realise that he could no longer eat meat 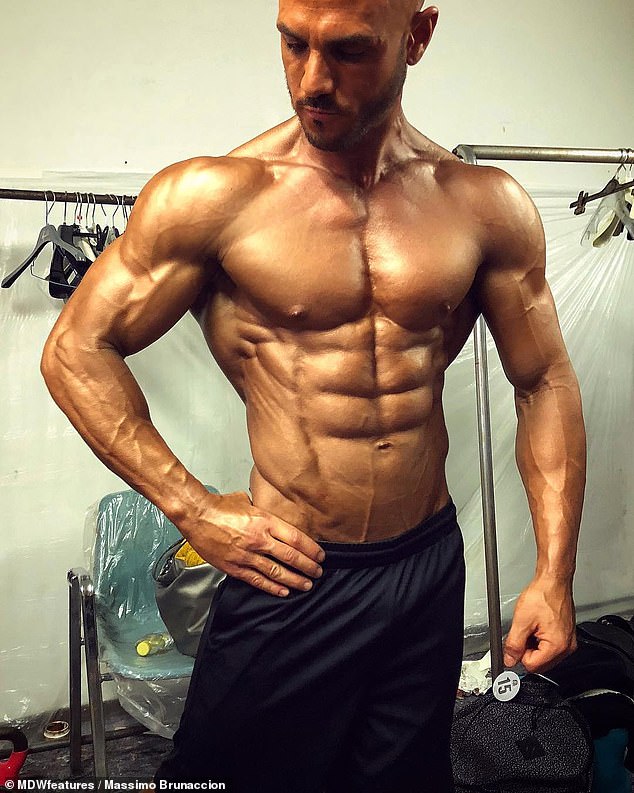 Reaction: Many people have suggested that the 33-year-old has simply built up his body with meat and is merely maintaining the muscle with a vegan diet, something he says is incorrect 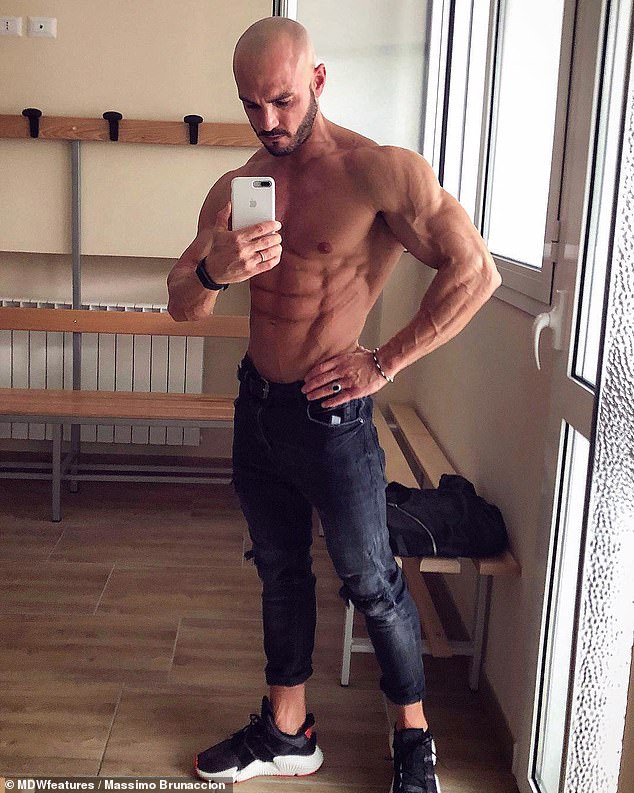 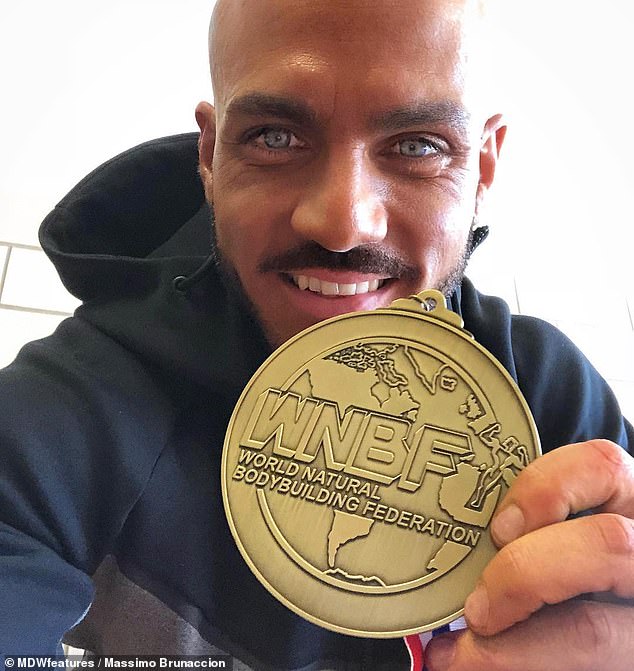 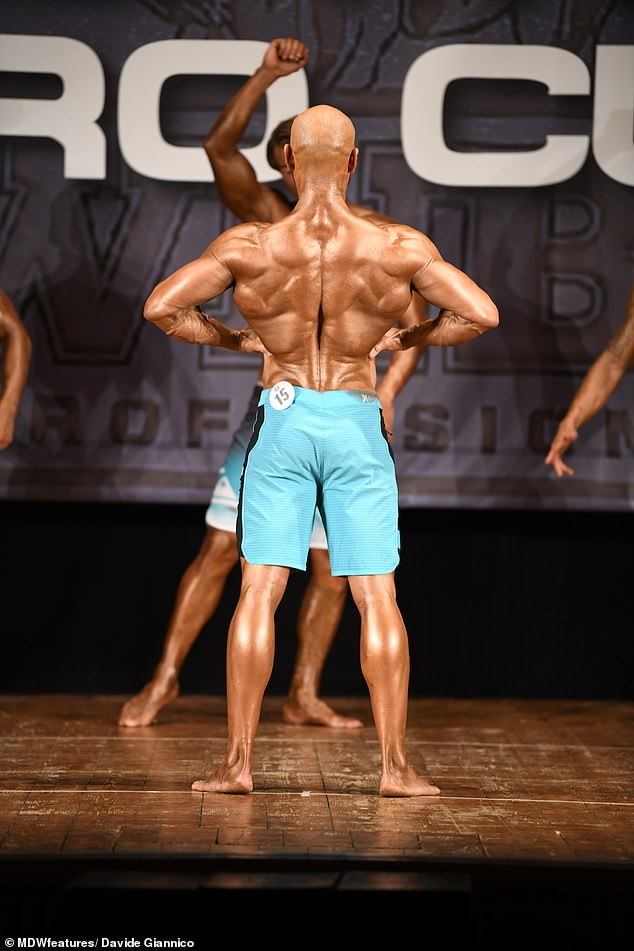 Massimo regularly competes in body building competitions all over the world and came second in the World WNBF competition in LA two years ago, and first place in the INBF Natural USA competition in April 2017 and 2018.

He has just come back from the World Championships in the USA this month where he placed second in the world.

Massimo says natural bodybuilding is perfect for him: ‘I am a natural athlete who competes for a natural federation (WNBF) and I am subjected to anti-doping tests before each competition and sporadically during the year. In the world of sport and in particular in bodybuilding there is the rule of ‘it has always been this way’.

‘The vegan diet goes to undermine the certainties inherent in many people and especially in sportsmen and that is that the meat is necessary to put on muscle and play sports. I often deal with ‘insiders’ like trainers and instructors and very often I’m asked where I get protein from.

‘Many high-level athletes write to me for advice on how to limit or eliminate animal derivatives from your diet.’ 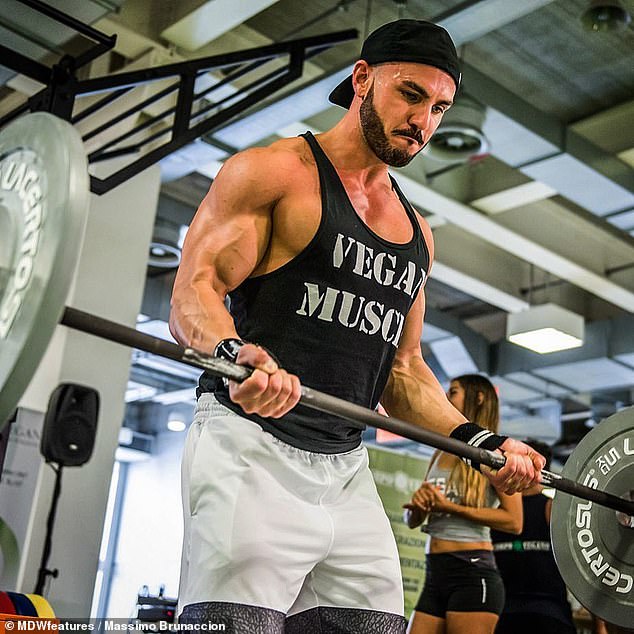 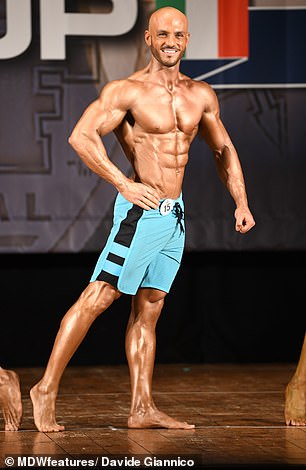 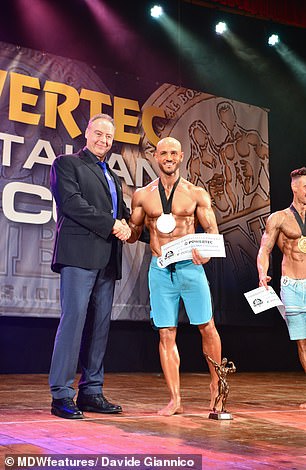 Not only has adopting a vegan lifestyle helped Massimo when he’s competing, he says it has also brought him in touch with his emotions and went into detail about the most difficult thing about his lifestyle change.

‘In addition to improvements in strength and energy, I feel much better even on a spiritual level. I get more excited than before and I always try to commit myself to helping other causes, such as animals or people in need,’ he explains.

‘Also, I cry for simple things, for a film, for a song, for a poem. I never cried before. I think becoming vegan gave me more sensitivity. I can say that I feel like a better person. 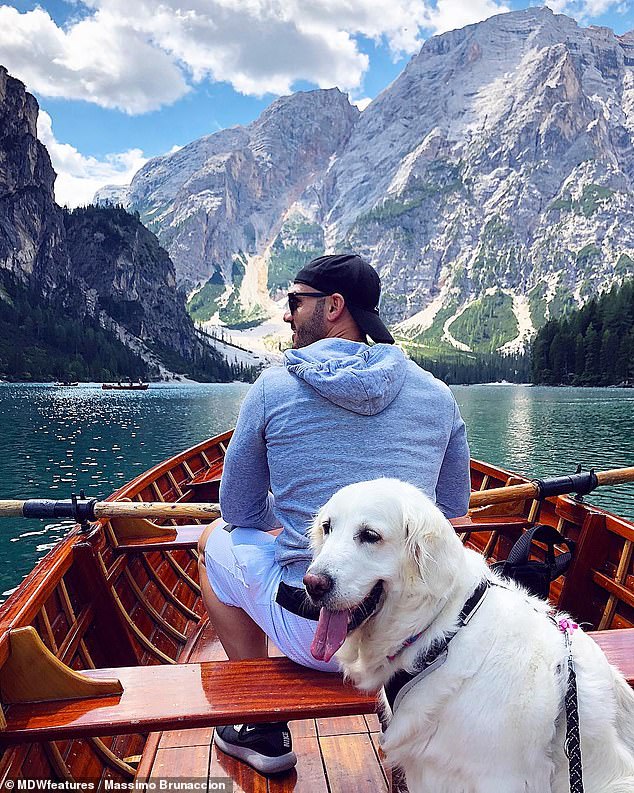 Luce and me: the bodybuilder’s golden retriever goes everywhere with him

‘The hardest thing was not knowing about food. We all know very well all types of meat and fish because we have eaten them since we were born.

‘When you become a vegan, you can often find yourself in trouble because you do not know what to eat, where to get the necessary proteins and how to change your diet. It is necessary to study, inform and experiment and then every difficulty disappears.’

Massimo can squat an impressive 160kg, bench press 130kg and deadlift 210kg – he shared his final words of advice to anyone else wishing to pursue a vegan lifestyle.

‘What I recommend to those who do not know where to start is to rely on a doctor or a nutritionist,’ he said.

‘Vegan feeding is adequate for all people in all stages of the life cycle but must be balanced with all macro and micro nutrients.

‘You need to know how many calories to eat, where to get protein, iron, calcium, etc. Vitamin B12 and vitamin D should be monitored.

‘If you do not have the knowledge, it is better to rely on an expert in this area.’