The end of Oxford Street as we know it? New developments boasting 500 apartments complete with luxury roof terraces, gyms and city views mean there are now TWICE as many homes as shops as the high street declines (but they’ll cost you up to £4.5 million)

A surprising new survey has revealed how Oxford Street is slowly turning from the capital’s shopping hub to a residential address.

Currently one of London’s top tourist destinations, it has attracted visitors from across the world for hundreds of years, and boasts famous department stores Selfridges and John Lewis alongside an array of chain shops.

The road was given its famous name in 1729, when it was a sought after residential area, before its smart townhouses were transformed into retail premises in the 1830s.

But over the past five years it appears to be transforming back to its roots, after a survey by Aston Chase, undertaken in association with developer Galliard Homes, showed there are 437 homes being built on Oxford Street – almost double the 248 shops being developed.

A surprising new survey has revealed how Oxford Street is slowly turning from the capital’s shopping hub to a residential address. Pictured: A luxury bedroom overlooking the street in the Verge Mayfair development 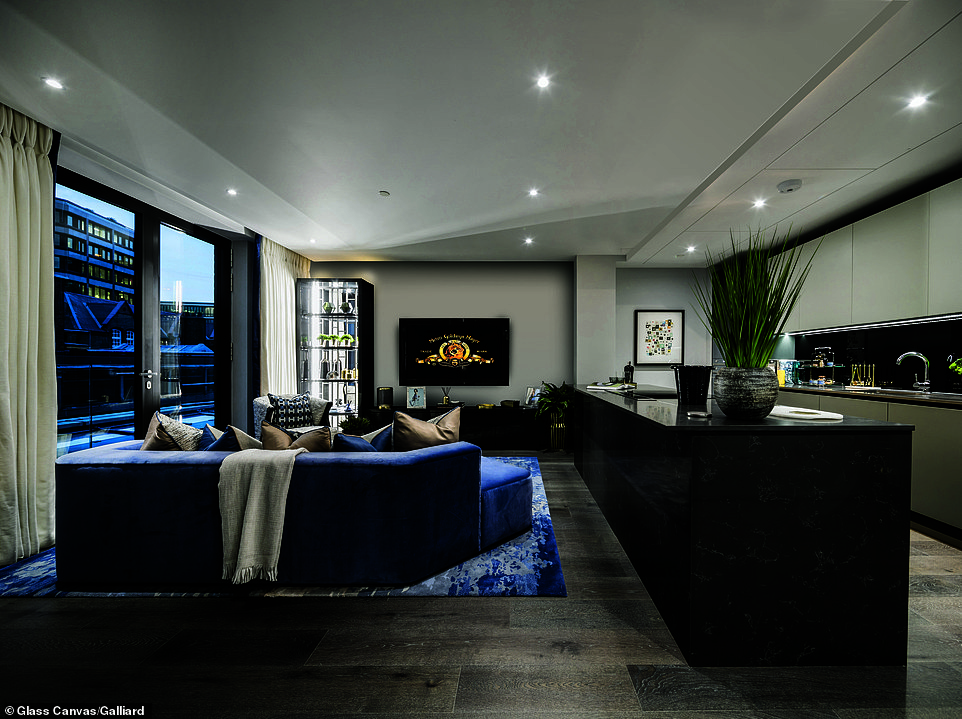 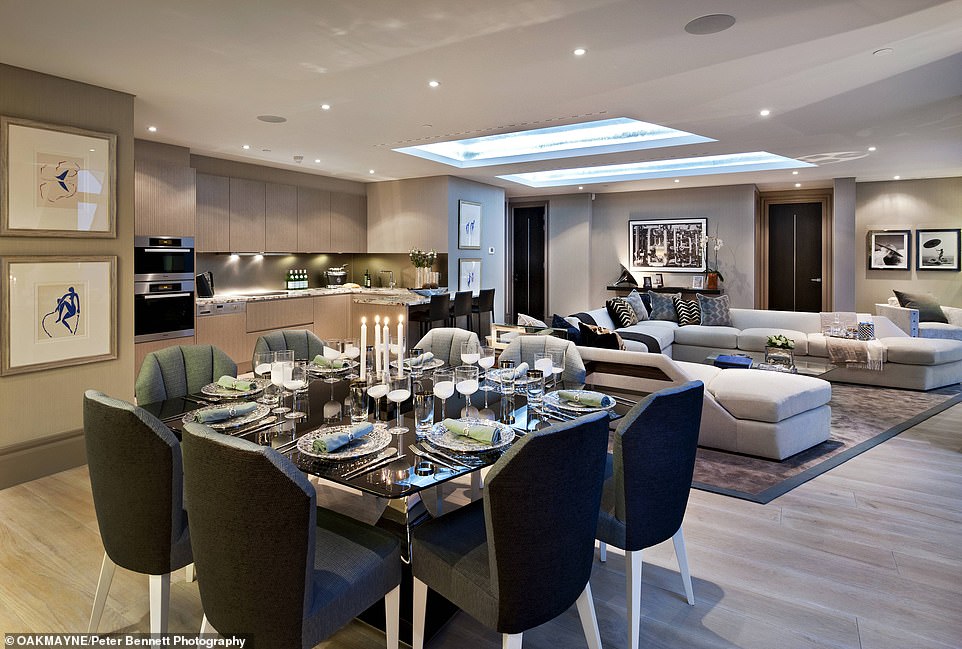 An open plan kitchen/ diner and sitting room is seen in the Verge Mayfair development, which provides 12 exclusive apartments

There are now nine new residential or residential-led mixed use developments on or adjacent to Oxford Street, with a gross development value of £1.06 billion and provide a combined total of almost 500 private sale apartments and penthouses. 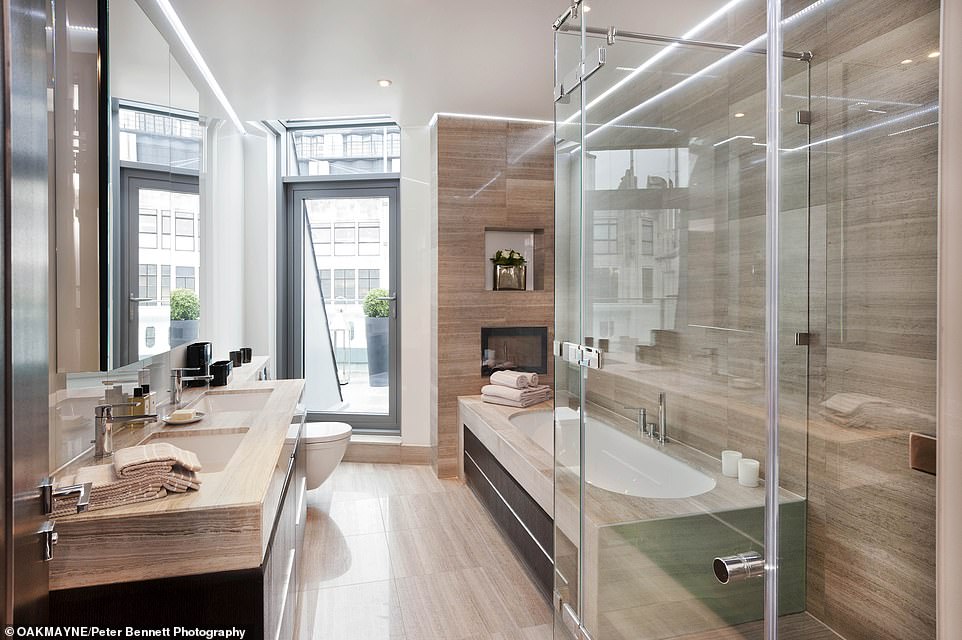 A large bathroom with his and hers sinks and wooden panels is pictured, complete with a prime view of Oxford Street 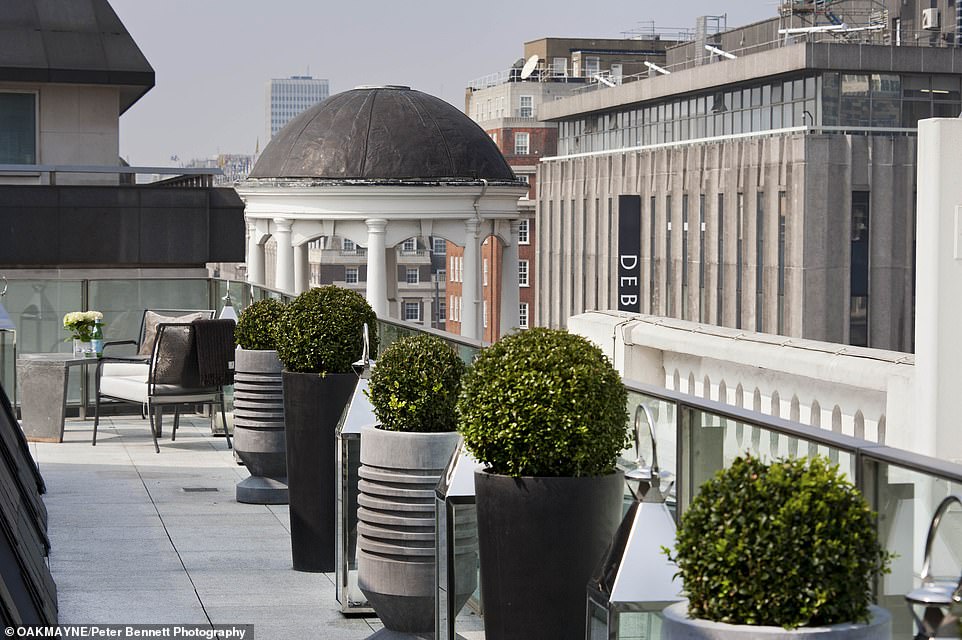 The roof terrace overlooking Debenhams and some of the city’s attractions is seen in the Verge Mayfair development, which provides 12 exclusive apartments 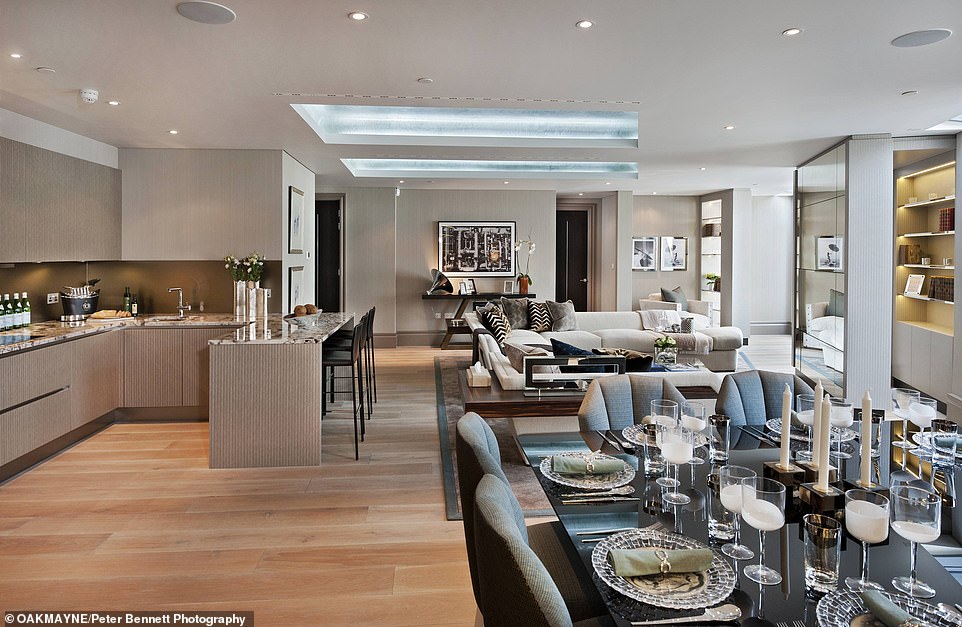 It is predicted that over the next five to 10 years Oxford Street will become one of central London’s most sought-after residential addresses.

David Galman, Sales Director at Galliard Homes told Femail: ‘The new Oxford Street survey shows that there are now as many homes being built along Oxford Street as shops.

‘The location is undergoing significant regeneration and becoming more residential in character. Currently the location is relatively underpriced compared to neighbouring Mayfair and Marylebone and this is good for buyers.

‘An uplift will come in property values as electric cars, Crossrail and pedestrianised areas bring dynamic change to Oxford Street. Over the next five years we see the famous throughfare becoming one of London’s most sought after residential addresses.’ 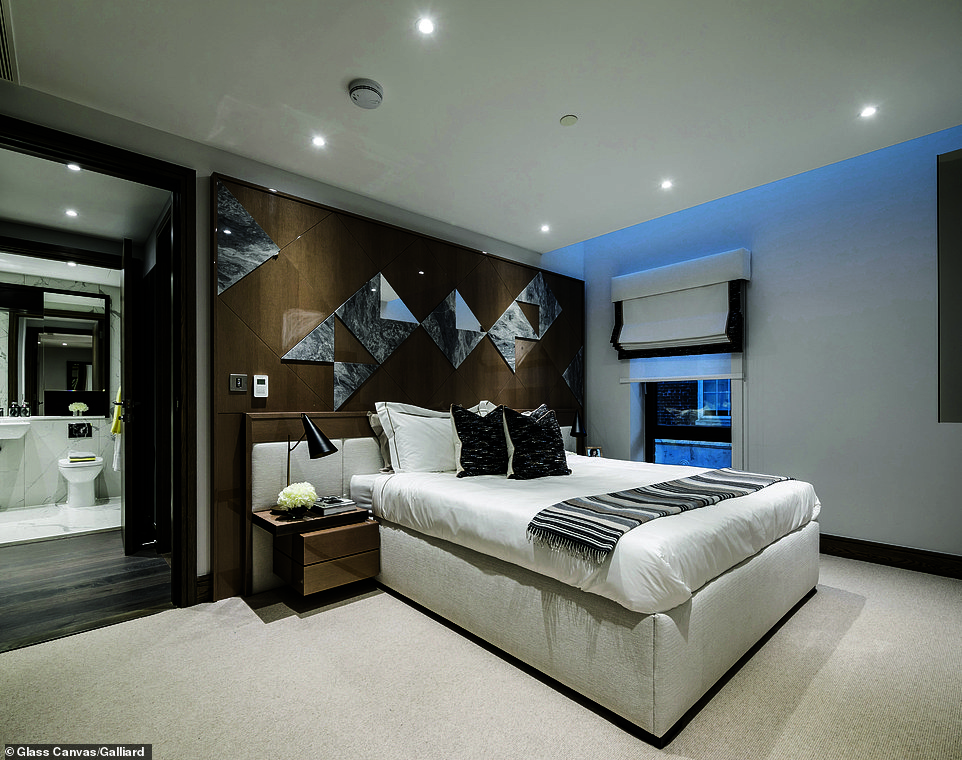 A bedroom complete with en suite bathroom is shown in the TCRW SOHO development, providing 92 apartments and 9,939 sqft of retail space 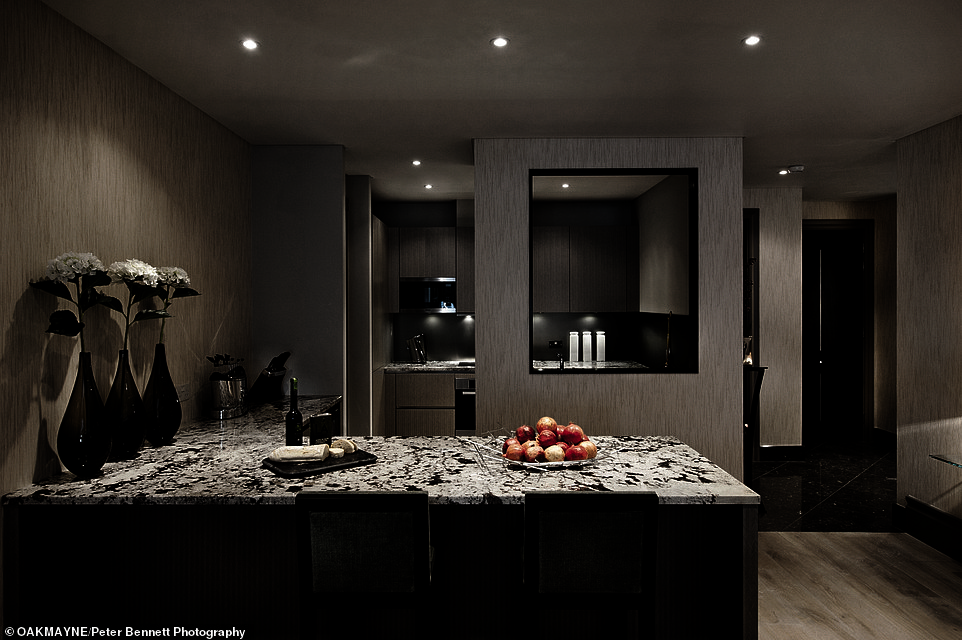 A Gothic themed kitchen is featured in the Verge Mayfair development, which provides 12 exclusive apartments

‘Technology and the internet have also changed the face of retailing. Advances in logistics mean that stores no longer require large stockroom areas on their upper floors, so new development can provide retail on the ground and basement levels, with new apartments above.’

Revealing their biggest property deal, he added: ‘At the Rathbone Place project by Oxford Street, Aston Chase sold the 4,000 sqft penthouse off plan for £15.25 million to a Scandinavian buyer.

‘This is one of the biggest residential deals on Oxford Street and demonstrates both how the location has changed, but also underlines the quality of the apartments and penthouses being built around Oxford Street.’ 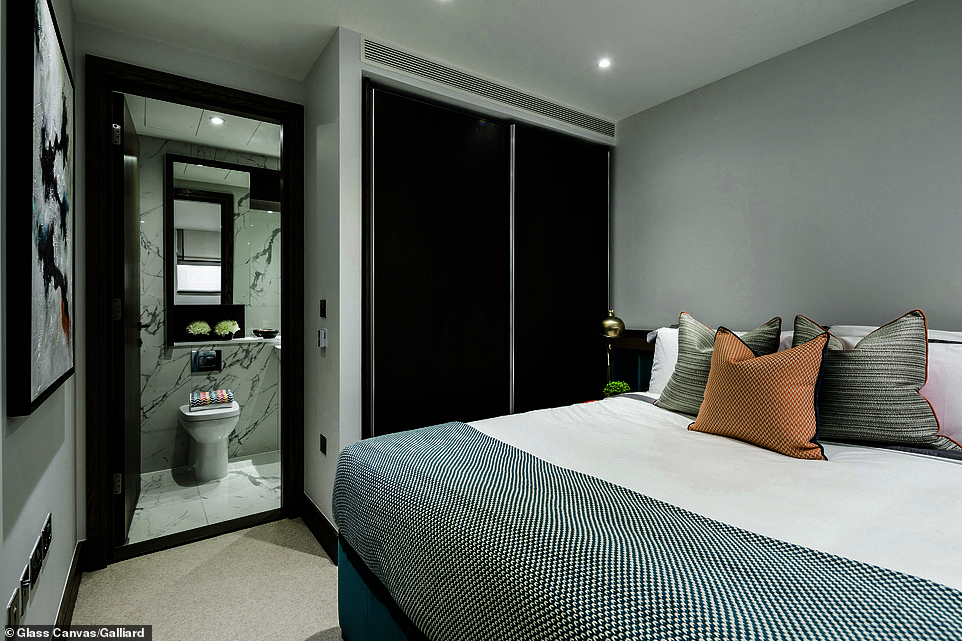 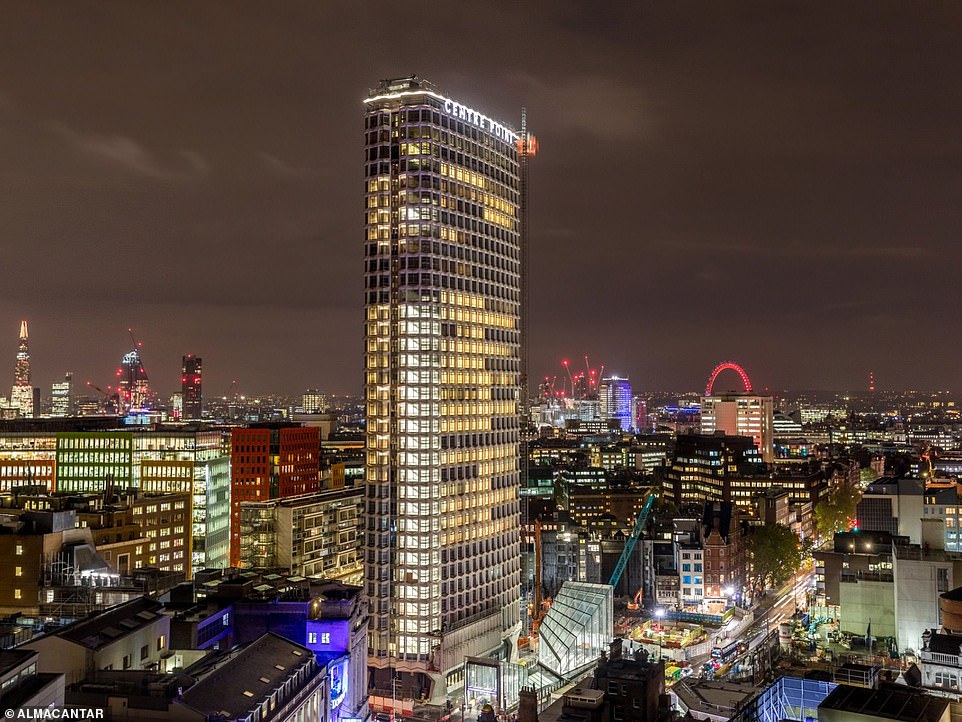 A view of ventre point, the London Eye and the Shard is seen from the roof terrace of one of the developments