Victoria Police spot checks on returned travellers subject to self isolation have found 42 people either not at home or having given a false address.

Officers conducting Operation Sentinel had conducted 180 checks by 9pm on Thursday but found only 138 people at home as required under Victoria's state of emergency laws. Twenty-two were not at home and 20 had provided incorrect addresses. 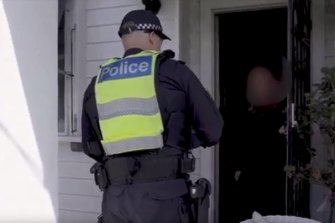 A Victoria police officer conducts a spot check on a traveller who returned from Bali.

The alarming result has sparked fears among officers involved in conducting spot checks that some returned travellers may have deliberately supplied a false address to avoid the mandatory self isolation period.

Text message exchanges between officers involved in Operation Sentinel reveal what police on the frontline are encountering.

"So of 6 we did – 3 home and isolating, 2 false addresses and one not home or false address," one message from a frontline police officer read.

Another officer reported that one-third of house quarantine checks done had revealed the person or people in self isolation to be genuinely sick. This raised fears among officers that those living in the same house but not subject to self isolation might be spreading COVID-19 each time they went out into the community.

In rules in place since March 15, returning travellers have been required to self-isolate for 14 days. But Victoria Police has yet to issue any fines against a person found to be in breach of self isolation rules. Chief Commissioner Graham Ashton this week used blunt language to encourage returned travellers or those exposed to COVID-19 to do the right thing.

"It's not a crime to be a dickhead," Mr Ashton said.

In a statement to The Age on Friday, Victoria Police stressed it was important to understand there could be a range of reasons why someone might not be at the residential address they nominated upon returning to Australia.

"For example, they could be out seeking medical care/supplies, staying at their partner’s place after returning from a couples holiday and deciding to self-quarantine together rather than at their individual homes, or choosing to stay at a holiday home," the police statement said.

"There is no excuse if people are deliberately providing false addresses".

Hard to read incoming passenger cards could also be another factor in police not being able to locate returned travellers during spot checks.

Victoria Police have revealed on Friday that the number of its staff under quarantine was approaching 300, with the majority undergoing self isolation having returned from overseas.

The Age has been contacted by several officers worried that they have had to perform duties with police who have just returned from overseas days before the mandatory 14-day self isolation rule came into force on March 15 for returned travellers.

The issue of roadside breath tests remains a concern among some officers as well despite the suspension of the use of booze buses to conduct mass random drug and alcohol tests.

The Age is aware of a directive for some officers to perform 10 preliminary breath tests per shift from their patrol vehicles. This has caused alarm among some officers who believe it increases their coronavirus exposure and is at odds with the suspension of mass testing. Force command this week rejected claims officers had been given breath test quotas.

Victoria's influential Police Association this week called on Premier Daniel Andrews to declare a state of disaster to enable police to enforce social isolation measures and bans on mass gatherings more effectively. This would give police the power to issue fines without having to first seek direction from Victorian health department officials

Under present arrangements, which Mr Gatt described as "clunky", police work under the direction of Victorian health officials in conducting spot checks.

Police have also raised concerns about their exposure to COVID-19 because of a lack of personal protective equipment and disinfection protocols at stations.