The letterhead is what takes the biscuit. Sarah Ferguson’s handwritten ‘invoice’ for £200,000 could have been scrawled on the back of a restaurant menu, the happy ending to a bit of business consummated over poached salmon and a bottle of Chablis.

The kind of cosy deal we suspect happens when a royal desire for a little spare cash coincides with opportunity in the shape of an impressionable foreign businessman, a touch of red carpet fever and an open cheque book.

Not terribly uplifting, perhaps but, with a worldly shrug, we might be tempted to let it pass. This isn’t the first time, after all. The poor woman has to eat and, hey, at least it wasn’t the fake sheikh again — the undercover reporter who, posing as a rich Arab, tricked her in 2010 into agreeing to provide access to Prince Andrew for £500,000. 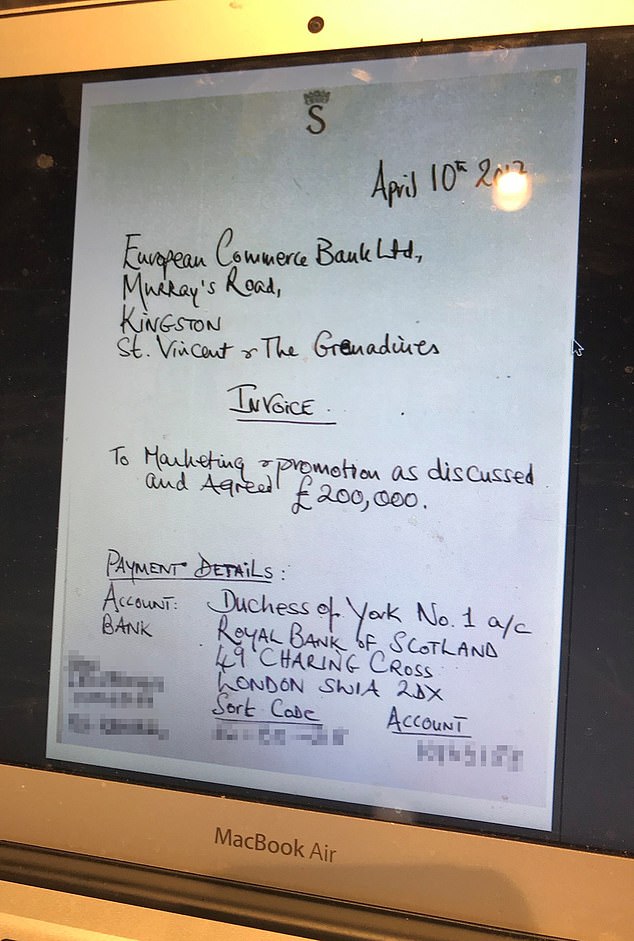 The letterhead is what takes the biscuit. Sarah Ferguson’s handwritten ‘invoice’ for £200,000 (pictured) could have been scrawled on the back of a restaurant menu, the happy ending to a bit of business consummated over poached salmon and a bottle of Chablis

But she didn’t write the invoice on the back of a menu. She wrote it on paper headed by a royal cypher — a relic of her long-ago marriage to the Queen’s son.

A royal cypher is a big deal: that artistically stylised ‘S’ surmounted by a coronet has priceless symbolic value — it gives royal authority to whatever document it appears on. It is, literally, a royal seal of approval.

That is what Sarah, formerly known as HRH The Duchess of York, was selling — not her skills in marketing and schmoozing but the dignity, majesty and, yes, the commercial brand value of the British Monarchy.

When Sarah chose that cypher for her invoice to Dr Johnny Hon — a Hong Kong tycoon who, as the Mail revealed on Saturday, paid her £200,000 for ‘marketing and promotion, as discussed and agreed’ — she was fully aware that it lent her vital credibility as someone able to deliver royal-level business connections.

Some wonk could probably calculate how many zeroes it added to the six-figure number she had successfully negotiated. Smart royal business — or scandalous money-grubbing?

The answer is in that word ‘lent’ in the previous paragraph. Even back in the 1980s in the good old days of It’s A Royal Knockout — when she and other Royals performed in a frankly embarrassing charity version of the game — the power of royal cypher was never really theirs. It was borrowed from the people, who allow the Windsors to reign over them. 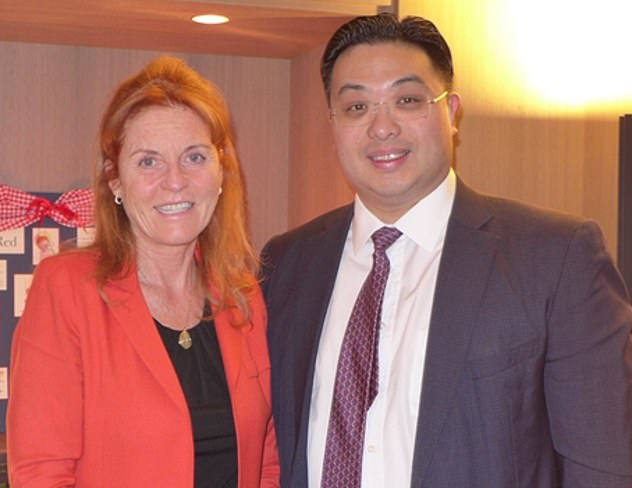 When Sarah chose that cypher for her invoice to Dr Johnny Hon (pictured together) — a Hong Kong tycoon who, as the Mail revealed on Saturday, paid her £200,000 for ‘marketing and promotion, as discussed and agreed’ — she was fully aware that it lent her vital credibility as someone able to deliver royal-level business connections

In this sense, the fancy ‘S’ for Sarah surmounted by a coronet stands not for her as an individual but for all the trappings of royalty, from palaces and footmen to gold coaches and helicopters.

These symbols ancient and modern lend the appearance of power to a powerless institution. They are the visible reminder of the contract between monarchy and people by which the monarch and her family serve the public good and in return enjoy prestige, deference and luxury.

Devalue these symbols and you damage royalty’s claim on the material rewards for their sacrifice. Every misused cypher, every artlessly trailed palace connection, every step out of the path of royal self-denial is another loose thread pulled from the monarchy’s precious tapestry.

It’s no coincidence that their self-indulgence underlies much of the criticism currently levelled at Prince Harry and his wife, with Nigel Farage just the latest (if most tactless) voice in a chorus of disapproval. Conspicuous consumption is bound to rouse the puritan that lurks in the most ardent monarchist.

In Sarah’s defence, she’s not alone in helping herself to Dr Hon’s generosity because — as was eventually confirmed — Zara Phillips’s bank account has also benefited from his business model after she was paid £100,000 a year between August 2016 and last March. 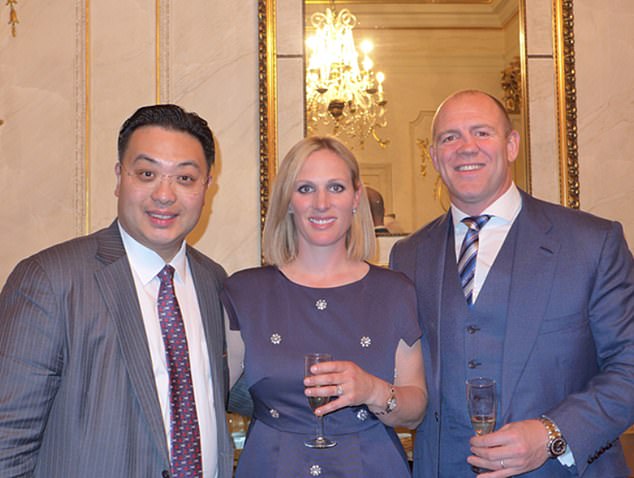 In Sarah’s defence, she’s not alone in helping herself to Dr Hon’s generosity because — as was eventually confirmed — Zara Phillips’s (pictured with husband and former England rugby star Mike Tindall and Dr Hon) bank account has also benefited from his business model after she was paid £100,000 a year between August 2016 and last March

There are precedents, of course. The Duke and Duchess of Windsor were notoriously reduced to peddling tat on American TV to raise extra pocket money, and older members of the Queen’s extended family have sometimes displayed questionable judgement in their commercial dealings. Perhaps Fergie’s only real mistake was to write her invoice on the company note paper — for vulgar cash.

Once we start turning over stones in this royal rockery who knows what else might come to light? After all, what’s the moral difference between a nice consulting contract here and an equally nice gesture of corporate gratitude there?

Minor royal figures currently getting it in the neck for trading on their connections might reasonably point to the extraordinary deal struck in 2001 by the Spanish ceramics manufacturer Porcelanosa to install an ‘Islamic garden’ at Highgrove (estimated value £100,000) in return for Prince Charles hosting a promotional event — featuring the young Prince William — for the company and its local dealers.

Fergie and her fellow accused could probably point to many other examples of those higher on the royal pecking order accepting the generosity of ingratiating billionaires without a blush.

Yachts, jets, private islands; it’s a long and mouth-watering list of goodies — ‘benefits in kind’ might be the taxman’s definition — which some less scrupulous Windsors perhaps think are reasonable perks for their lives of service.

It helps presentationally if there’s a charitable element built into the deal. For the super-wealthy, there’s an irresistible appeal about some of the stuff that we’re told isn’t for sale: respectability, good press, royal invitations . . .

Except a lot of it certainly is for sale. It’s well known in wealthy circles that a big donation to a favoured royal charity is the quickest way to get your feet under the royal dinner table — and often that’s just the start of a mutually beneficial relationship in which money and power are brokered for royal bragging rights and influence.

It’s a cynical business: I remember Princess Diana’s verdict on one such benefactor, eager to buy respectability and a dance by impressing her with the size of his charitable donation: ‘He’d put his money in a dustbin if I asked him to.’ 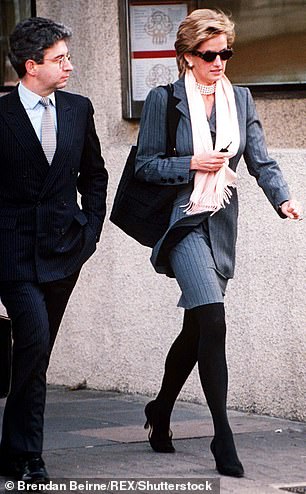 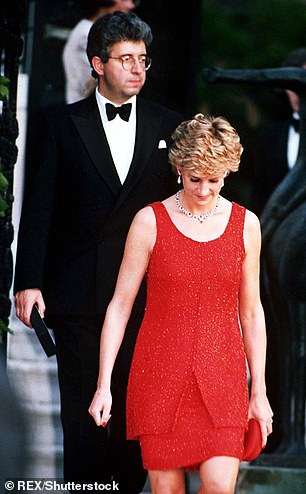 It’s a cynical business: I remember Princess Diana’s (pictured with her then private secretary Patrick Jephson) verdict on one such benefactor: ‘He’d put his money in a dustbin if I asked him to’

But Diana generally had a shrewd sense of self-preservation when wading in the murky waters where royalty and money mix, taking what was offered for her good causes while carefully avoiding the more sticky inducements that often came with the package.

Her sister-in-law somehow never quite got the knack. Even — as reported in yesterday’s Mail — naively allowing her husband to negotiate a £15,000 ‘loan’ from the disgraced billionaire and paedophile Jeffrey Epstein.

We learned in the old nursery rhyme that the king was most likely to be found ‘in his counting house, counting out his money’. It’s nice to imagine that our royal family operates to a higher set of values than this, and certainly we can believe that of the Queen, whose Highland holiday can hardly have been improved by the latest crop of ‘cash for royals’ headlines.

But for the rest of the Windsor clan, the evidence suggests a continuing dependence on a more tangible reward for the rigours of royal life. Money.

Money is the sea in which royalty swim: for most of them, it’s all they’ve ever known, just as they know they have to keep it rolling in.

So let’s hope the rest of them forgive their cousins’ Del Boy tendencies, and heed the warning for themselves.

Who better than Harry and Meghan’s friend Jay-Z to spell out the perils for them: ‘Money and power don’t change you. They just further expose your true self.’