Play, meditate, read, think, sleep, eat. And repeat. This was the monastic routine that violinist Hugo Ticciati followed, day in and day out, for almost four years. Hugo the hermit. He chose to live in seclusion – studying under Russian violinists Nina and Oleg Balabina on the outskirts of Sweden – well before the coronavirus pandemic took away the choice. But, as Ticciati discovered, routine can be revolutionary.

Ticciati welcomes me with a hug when we meet in Barnes, in the London borough of Richmond upon Thames, in early March, just as the coronavirus is intensifying its creep around the world. He is rehearsing with the chamber orchestra he directs, O/Modernt, at a friend's home ahead of a performance at a local festival the following day. The British-born Ticciati grew up in the area, and he is now staying with his parents, who live nearby. Softly spoken, he is wearing a green knitted jumper and loose red-checked pants. There's something Harry Potter-esque about his boyish face, fringe and round, black-framed glasses. 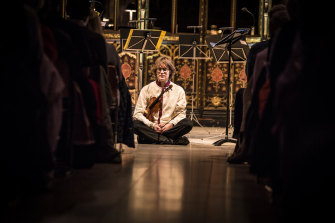 The 40-year-old was this year due to make his debut with the Australian Chamber Orchestra, directing and playing violin in the concert Music to Heal. Even though the concert has been cancelled due to the pandemic, its concerns have perhaps never been more relevant. Ticciati developed a program to explore the links between music and healing, and the concert would have culminated powerfully in Beethoven's String Quartet in A minor Op.132, which the composer wrote during the early period of his deafness. Ticciati is intensely interested in the overlap of music, spirituality, meditation, the body and wellbeing – an interest that emerged after he injured himself so badly that he nearly gave up playing violin for good.

But that's to come. Ticciati's life as a musician starts when he was six or seven and he heard a recording of Menuhin playing Beethoven’s Violin Concerto.

“I felt one could see through the sound and hear the soul of the player. I mean, that sounds very grand but it had such a direct reflection of the person playing it. So that for me, felt this direct contact, so the instrument in a way disappears and you're in touch with some spirits,” Ticciati says.

He was learning piano at the time but asked his mother if he could switch to violin. From a musical family, Ticciati's grandfather was a conductor and composer, his parents play music and his brother, Robin, is a well-known conductor. 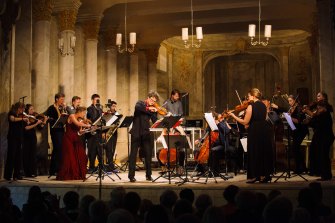 Violinist Hugo Ticciati: “After eight months, I basically burned out, totally. I couldn’t move my neck and my back and my wrist.”

It didn't take long for Ticciati's newfound passion to be realised; at the age of 12 he made his debut at the Edinburgh Festival and the Queen Elizabeth Hall in London. Despite the stereotype of the child musical prodigy, he says he never felt pressure to perform and he never consciously determined he would be a professional violinist. Ever an optimist, Ticciati says he has always been open to taking leaps of faith. So, when his playing plateaued as he edged towards adulthood and he felt he wasn't of a sufficiently high standard to attend a conservatorium, Ticciati enrolled in a music degree at Cambridge. But before he started the semester, a professional violinist urged him not to give up and to study under David Zafer, who taught at the University of Toronto.

In Canada, Ticciati fell into a strict routine, practising for hours a day. But he was tense as a musician, and the physical strain of playing the wrong way took its toll. His backed ached; he sometimes couldn't walk or get out of bed. There were nights where he thought he would have to stop playing for good.

'After eight months, I basically burned out, totally. I couldn't move my neck and my back and my wrist.'

“After eight months, I basically burned out, totally. I couldn't move my neck and my back and my wrist,” Ticciati says. “I loved being there, I was just playing these exercises day in, day out, but basically playing with tension and playing slightly the wrong way. Now, if you do that over hours and hours, your body very quickly feels the effects.”

Ticciati thought his only choice would be to return to Cambridge and academic life, but before he did he had a fortuitous 10-minute lesson with Russian violinist Nina Balabina. It might have been a short lesson, but it had long-lasting effects. Those 10 minutes would change his life.

“She straight away pinpointed the areas in my back and my wrist, everything, saying, ‘Is this sore? What about trying this?’ Within 10 minutes I knew, this is it. This is what I'm looking for,” Ticciati says.

He booked a one-way ticket to Sweden in 1998, where he underwent a period of isolation that was “an incredibly deep schooling”. Play, meditate, read, think, sleep, eat. And repeat.

“Basically I became a hermit. I hardly left the house and just played, meditated, read and slept and ate a bit. But what I did over the first, for four years, I didn't play any pieces. It was just open strings, studies, scales just to really, basically relearn from scratch,” Ticciati says.

“So literally the first month, all I did was pick up the violin and play open strings. So I could just become aware of the body again, because the problem, when one's passionate and has lots to say through one's instrument or feels one does, then one gets tense if one can't say it, one's trying to express and is stressed.”

Ticciati returned to the basics of playing, learning the violin as if for the first time. And as his playing underwent a metamorphosis, so did he. He started meditating, reading philosophy and mystical literature, and practising yoga; he felt more at ease in his body and in his mind.

Basically I became a hermit. I hardly left the house and just played, meditated, read and slept and ate.

“It was just an element of just freeing the mind, getting into the body, letting go of thoughts and embarking on a path of hopefully more self-awareness, more awakening, more whatever one wants to call it these days, but a transformational journey, evolutionary journey as a person, as a violinist, as a being,” he says. 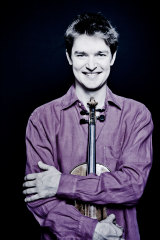 Hugo Ticciati’s work is inspired by his interest in spirituality and meditation.Credit:Marco Borggreve

After nearly four years, Ticciati started to emerge from his cocoon. Spirituality, nature, healing, philosophy are now at the core of his work as a violinist and conductor. He works in the contemporary music space, holding recitals and directing works in concert halls around the world. He also founded the music festival O/Modernt, which takes place at the oldest rococo theatre in Sweden, and is designed to “release the listener from their conventional box of habit”.

And Ticciati too is not constrained to conventional performance spaces; he spent two weeks in an ashram in the Himalayas where he played Bach to monks.

“One's always disturbing the mystery of life by too much of our vanity and too much work, and too much thought,” he says.

“We cover our weaknesses by talking and by doing, whereas silence leads one into a place of being and allows one just to be and observe and be aware of what one's experiencing, and confront, one has to confront it. If one can't talk about and do things with it, one has to confront that, those elements of oneself.”

And he finds the silence he craves when he returns to his villa, in woods on the outskirts of Stockholm. “So I wake up, it's total silence. I hear the birds. And I love it,” he says.

But how does one negotiate inner peace and calm with the demands and realities of life as a professional musician – globe trotting, media interviews, record releases?

“There's definitely a dichotomy. And I think more and more, I'm beginning to negotiate that better and better. But that's something one needs to work with. One is drawn into the worlds of the career, of money, of power, of all these elements,” he says.

“I think being a violinist in that world, it's a matter of how it relates to it. One can't avoid it, but one can relate to it very differently. I think it's learning how to relate to it and not be sucked in by not being, in a way, influenced by it. But it's part of the play, part of the theatre of life. One enters into it and plays one's role.”

The role-playing serves a greater good for Ticciati, and his belief that the transportative effect of listening to and playing music offers some rare comfort as the world seeks to recover from the coronavirus.

“Music is always a reflection of the internal, psychological, emotional, physical,” he says. “It's such a cathartic process of listening to music, which is born out of pain. That by listening, experiencing, playing, sharing … it's a catharsis of one's own pain, and offers a sense of healing and wellbeing.”

From the Ground Up: The Chaconne by Hugo Ticciati and O/Modernt is out now via Signum Classics.