WASHINGTON — Americans will get their chance to pay their respects to former President George H.W. Bush, the nation’s 41st president. His body will lie in state until Wednesday morning, when a state funeral will be held.

Mr. Bush served the country from World War II to the end of the Cold War, and beyond. He died Friday at 94, less than eight months after the death of Barbara Bush, his wife of 73 years.

In a moment made for the history books, the sun set over Washington as the the casket bearing Mr. Bush was carried up the Capitol steps. Waiting at the top were more than a dozen members of the former president’s cabinet, along with former Vice President Dan Quayle and an emotional 43rd president, George W. Bush. 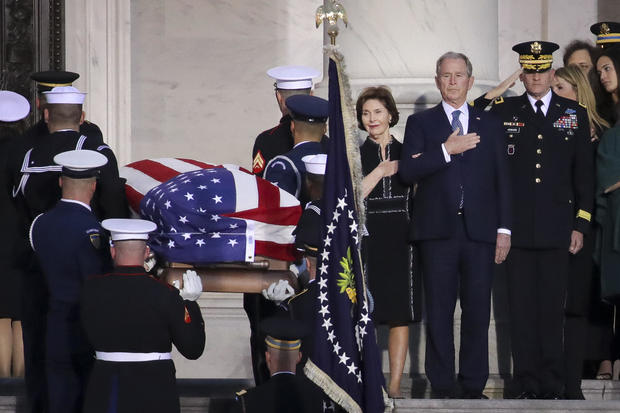 Inside the Capitol rotunda, the speaker of the house paid tribute to a remarkable life.

“There is that image of him as a loving father reaching out to hold his son’s hand at the National Cathedral after 9/11,” said Speaker Ryan. 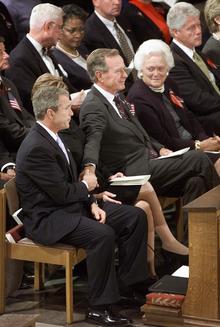 At the Capitol and across the nation, flags fly at half-staff. The New York Stock Exchange observed a moment of silence for the 94-year-old, who passed away Friday night at home in Houston after telling his oldest son by phone that he loved him.

On Monday morning, the younger president Bush greeted his father’s casket at Ellington Air Force Base in Houston. The extended Bush family accompanied the casket to Washington aboard Air Force One, renamed “Special Air Mission 41” for the flight to Joint Base Andrews.

His service dog Sully, who kept watch at his master’s casket overnight, made the journey too. At Andrews, there were more solemn tributes from the military for a man who was not just commander in chief, but one of the youngest naval aviators in World War II. He flew 58 missions in the Pacific, starting at age 18.

He never lost a love of flying. An aide revealed this weekend that Mr. Bush, who also loved to make a statement with his socks, chose to be laid to rest wearing a special pair that marks his time as a naval aviator.

After the war, Mr. Bush went to Yale University, founded an oil company, served two terms in the House of Representatives and fathered six children with his beloved Barbara, who passed away in April. 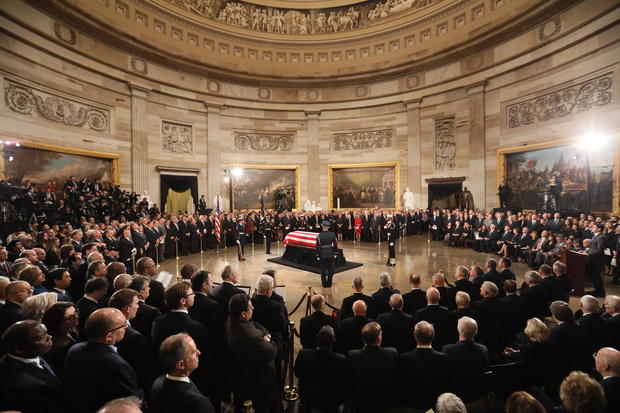 The casket of former President George H.W. Bush lies in state in the U.S. Capitol Rotunda on December 3, 2018 in Washington, DC.

In the 1970s, Mr. Bush was appointed ambassador to the United Nations and director of the CIA. He lost his bid for the White House in 1980, but the man who beat him in the primary tapped him as a running mate, which led to an eight year partnership.

“I heard that he said there’s nothing serious to do when you’re vice president. But he set the standard for what it means to be a vice president,” said Vice President Mike Pence.

Mr. Bush won the race to succeed former President Ronald Reagan by a landslide, steering the ship of state as the Berlin Wall came down, the Soviet Union dissolved and the first Gulf War broke out. He was defeated in 1992 by a Democratic governor from Arkansas who tapped into the nation’s growing economic anxiety. Bill Clinton told “60 Minutes” that the two developed a bond anyway.

“It’s been one of the great joys of my life, my friendship with him. Our arguments were good-natured and open, and we continue to debate things all the way up until recently,” Clinton said.

On Monday afternoon, members of the public began lining up to bid farewell to the man who famously called for a “kinder, gentler nation.”

A look at the life of the 41st President of the United States, Ambassador, Congressman, World War II veteran, and patriarch of a political dynast…