Location, Location, Location couple spend £317,000 on a 1960s two-bed flat that’s so small they have to use MIRRORS to make it look less cramped – as viewers brand them ‘crazy’ for paying so much

Location, Location, Location viewers were left in shock last night after hearing a couple’s ‘small and ugly’ two-bedroom 1960s-style flat came with a hefty £317k price tag – and they even had to use mirrors to make it look bigger.

In last night’s episode, presenter Phil Spencer caught up with first time buyers Louise and Johnny, who wanted an exact replica of the place they were renting, in one of the priciest parts of the country, Weybridge.

But viewers were shocked by the size and appearance of the properties the couple could afford with their reasonable £335k budget in the area.

‘Johnny and Loo are so f**** posh that they think spending £350K to live in a s*** prefab council flat will be really sheikh and totally cool,’ wrote one, while a second penned: ‘£325k for a small, ugly 1960s style flat in Weybridge? Jeez.’ 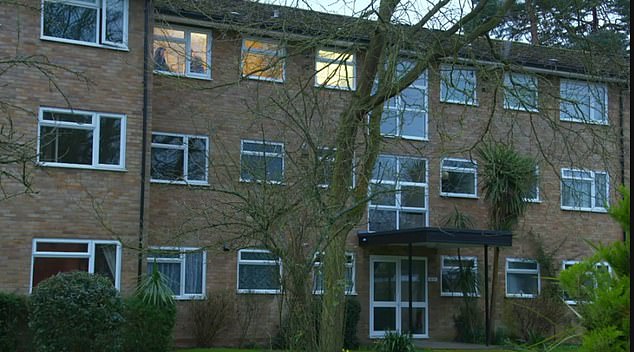 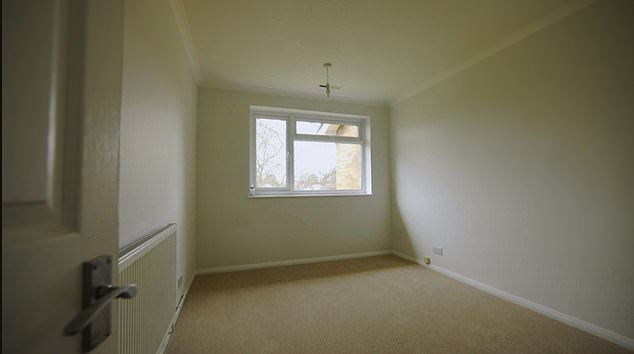 In last night’s episode, the couple explained how they were on the search for a carbon copy of their two-bed mid-century style flat which they were renting. Pictured, bedroom one in their new Weybridge flat 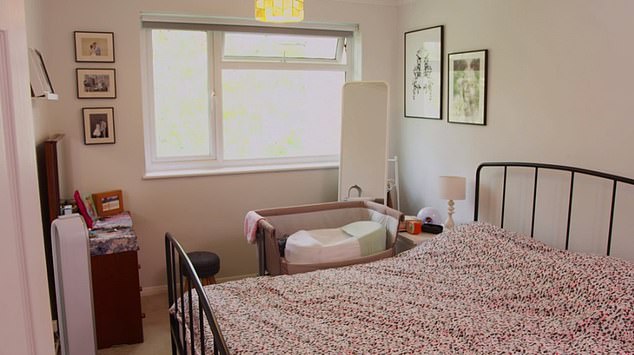 But viewers couldn’t get over the small size of the flat for such a big sum of money. Pictured, the bedroom after the transformation 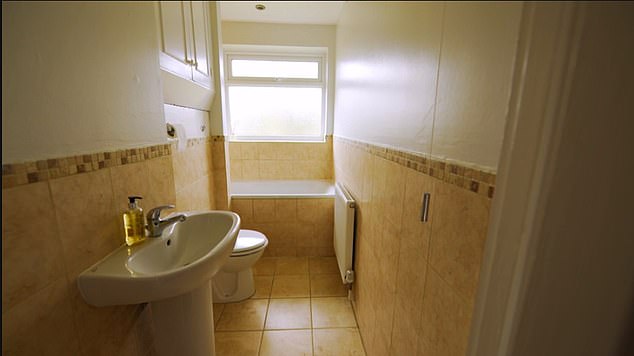 Viewers took to social media to express their strong opinions on the cost of the small flat. ‘£325k for a small, ugly 1960s style flat in Weybridge. Jeez,’ wrote one. Pictured, the bathroom before 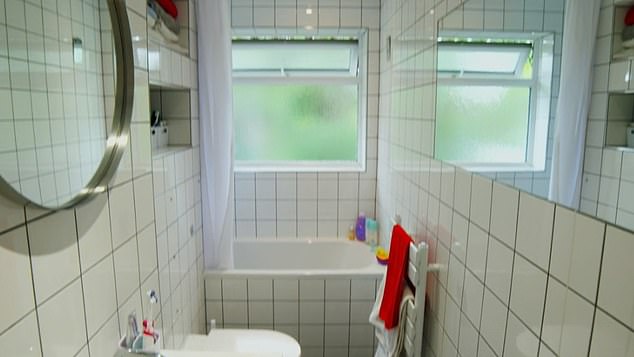 A third added: ‘Mad how the’re talking about value for money at £350k in a tiny flat. Money’s crazy.’

The couple dreamed of buying a carbon copy of their two-bed mid-century style flat which they were renting, with ample storage and parquet flooring.

‘What you’re looking for is very realistic architecturally in terms of what’s available in the area, but not in your range,’ said presenter Kirstie Allsopp.

And the first house Johnny and Loo visited in Weybridge, which was under budget at £325k, was in the perfect location with a south-facing terrace – but sacrificed other elements.

‘Standing here, we’re either going to be compromising on size or condition,’ joked Kirstie. ‘And obviously I know which because I’ve seen the flat.’

Highlighting the perks, the presenter told how the house offered open plan living, was freshly decorated and offered loads of natural light, masses of built-in storage and a loft – not to mention the parquet flooring. 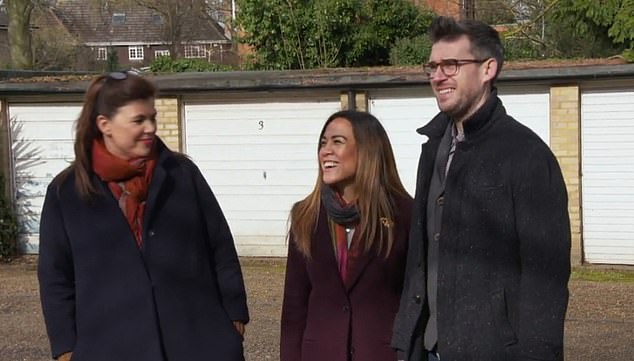 Before heading inside to the first house, Kirstie warned: ‘Standing here, we’re either going to be compromising on size or condition. And obviously I know which because I’ve seen the flat.’ Pictured, with Johnny and Loo 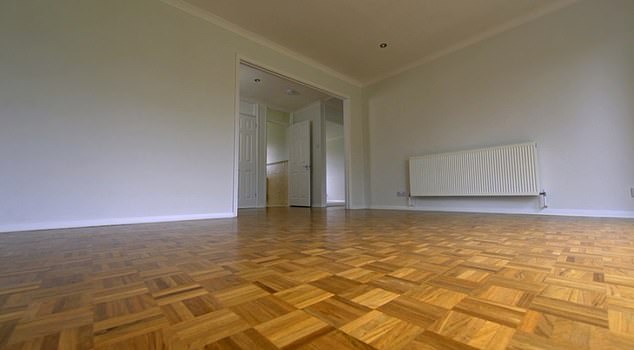 The couple dreamed of buying a carbon copy of their two-bed mid-century style flat which they were renting, with ample storage and parquet flooring. Pictured, the living room before in the £217k Weybridge flat 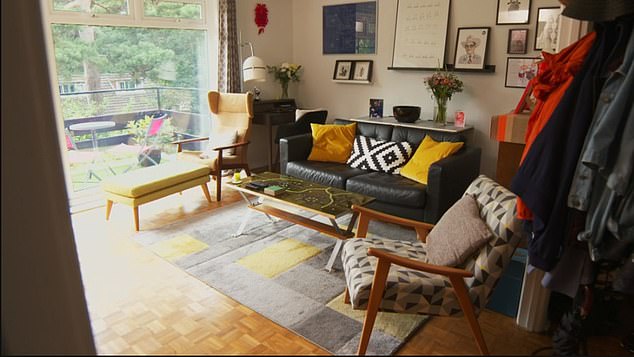 The living room looked bright and fresh following the couple’s transformation. Pictured after

However, there was no denying by anyone that the kitchen was a little on the compact size.

‘How keen a cook are you?’ asked Kirstie, before continuing: ‘Have you ever cooked on a boat or ship?’

After taking a look, Johnny, who works in marketing, joked: ‘There’s enough room to swing a cat, so that’s all good.’

And those who tuned into the show couldn’t believe the price of the property considering its size, either.

‘£325k for scruffy looking council flat with “south facing terrace,” wrote one, while another penned: ‘Am watching #locationlocationlocation with £320k houses being looked at in Weighbridge and thinking about my £95k three-bed maisonette on Bute wondering if I’m doing it wrong…?’

The second house the couple viewed, which was twenty minutes outside of Weybridge, meant it was 70 per cent bigger than the last, and £290k under-budget – but they were left unimpressed. 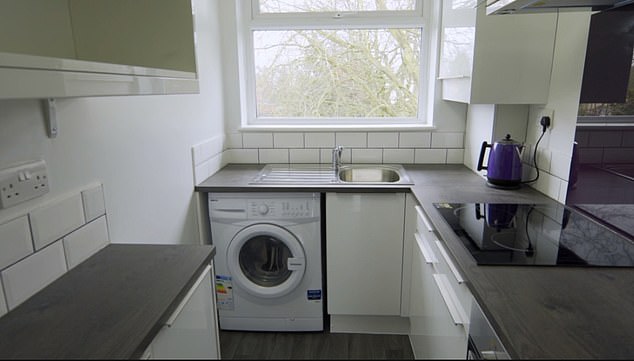 While Johnny admitted the size of the kitchen (pictured) wasn’t an issue for him, he also joked: ‘there’s enough room to swing a cat’ 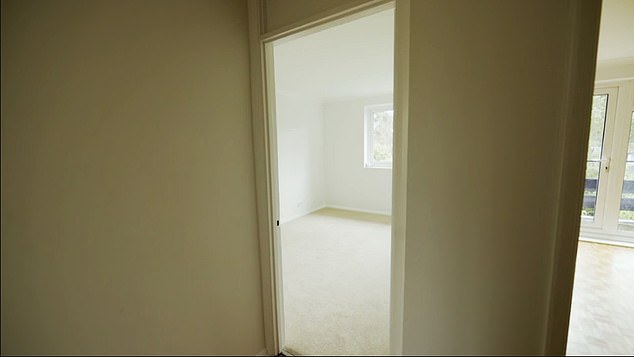 Towards the end of the episode, the couple revealed that two-and-a-half years are purchasing the property, they had welcomed a baby. Pictured, the second bedroom before 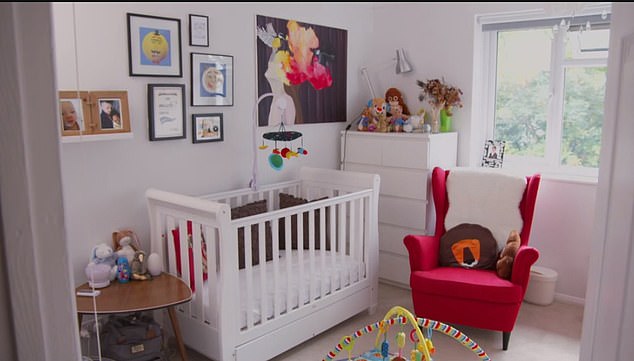 ‘The space is very good but I don’t quite feel the charm the first place had,’ admitted Johnny.

And the final property was a modern flat two-bedroom flat in the ‘very good location’ of Weybridge, which was on the market for a staggering £350k.

‘Put your blinkers on, every square inch of the flat has got stuff,’ warned Kirstie, before they headed inside.

While the experts suggested the two-bed ground floor flat had huge potential for starting a family, with loads of built-in storage – viewers struggled to see potential in any of the three houses.

In the end, the couple decided to go ahead with the first house and had their offer of £317k accepted.

And towards the end of the programme, it showed their transformation two-and-a-half years on – including the second bedroom being converted into their three-month-old baby’s nursery.

But even Loo admitted to following one of Kirstie’s top tips to try and make the tiny bathroom in their flat look bigger.

‘Kirstie suggested putting two mirrors opposite each other to make it look bigger, so we installed them in and it does create more light and more space,’ she said.

Many viewers took to Twitter during the episode, and were left unimpressed by the size and appearance of the houses the couple were shown