A chef’s ultimate guide to spuds: MasterChef judge Jock Zonfrillo shares his cooking tricks to pick the right potatoes for every dish – and why you should NEVER get rid of the skin

MasterChef Australia judge Jock Zonfrillo has offered his simple guide to picking the right potatoes for your recipe – from kestrel to creme gold.

With so many options on the market, the restaurateur said it can be tricky to know which variety is best suited to a specific dish.

‘I’m going to talk through what potatoes to use because sometimes it can be really confusing, you don’t really know which potatoes to buy,’ he said in a ‘how-to’ video.

‘My wife ask me every other day when she’s in the supermarket “what potato should I get for the roasts?”… Years later, I’m still answering those questions.’

And while most home cooks bin the potato skins, Jock said you’re actually peeling away all the flavour and nutrition.

‘Don’t be afraid of potato skins. Everyone’s mad about peeling potatoes and making them look delicious and pretty… Eat the skin,’ he suggested.

‘The best and most nutritious part of the potato is in the skin. All of the skins in these potatoes are fantastic, make sure you wash them before you use them but please keep the skin on.’ 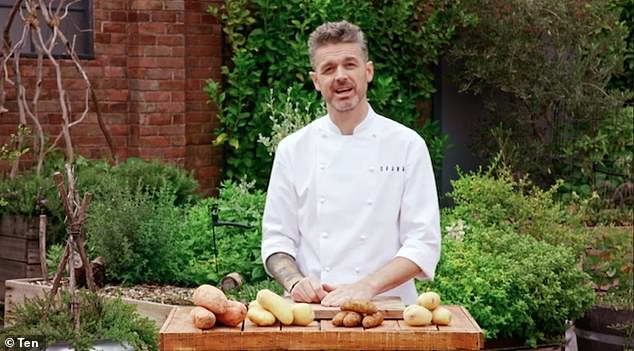 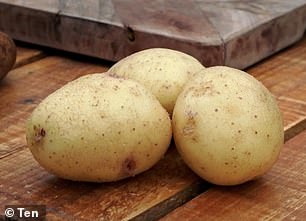 Jock said the kestrel potatoes are perfect for roasting because it contains a tiny amount of wax. Once roasted, the potatoes are crispy on the outside, light and fluffy on the inside

Jock said the kestrel potatoes are easy to identify because they are covered in unique purple dots on the outside, with a white flesh on the inside.

‘Kestrel potatoes are easy to tell, they’ve got these purple little eyes – they’re the only potatoes with them that you’ll see in the supermarket – it’s an easy one,’ he said.

‘They are brilliant for roasting potatoes.’

The chef said kestrel potatoes can be roasted in the oven to perfection because they contain a tiny amount of wax, compared to other spuds.

‘It ends up being about a 10 per cent wax and the rest of it is actually quite dry so when you roast these potatoes, because of their dryness and much less wax content, it means they dry up and go fluffy and crispy,’ he said.

‘For me, I parboil them first, and then in a colander, ruffle them up and throw them in a hot roasting pan with some grape seed oil or some peanut oil, and roast them up.’ 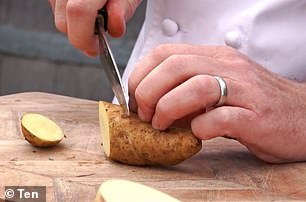 He usually slices the kipfler up before cooking them

‘A kipfler is your friend, it is a delicious potato. It’s much more yellow in the inside so there’s a lot more wax in it. This is one of the waxiest potatoes which means it’s really good for potato salads,’ he explained.

‘I would cook them as slices, not as whole. When they are just cooked, dress them in salad dressing, just a plain vinaigrette.

‘What happens is, as they’re cooling down, the potato just absorbs the vinaigrette and become the best, most delicious potatoes that you can add to any potato salad.’ 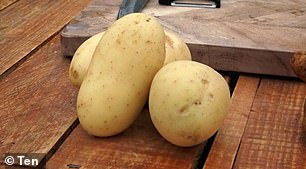 Jock said the creme gold potatoes are a waxy variety so they are perfect for baked dishes and chips.

‘It’s a great tasting potato once it’s been cooked in a certain way. The only thing to do with these is baked potatoes or chips,’ he explained.

‘Unfortunately, the waxiness won’t give you a fluffy texture that then goes crispy so that’s why it’s great potato to use for bake potatoes or chips.’ 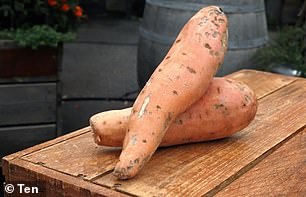 ‘Lots of fibre in these guys. I love getting a sweet potato, cutting them in half (long ways) and then I’d just cover it in tinfoil with a little bit of salt, pepper and a little bit of extra virgin olive oil, nothing else and in the oven, let it bake,’ he said.

‘What happens is because there’s a lot of sugar in these sweet potatoes, it starts to caramelise within itself with that salt, pepper and oil and you bring it out, and you honestly eat it with a teaspoon, it’s delicious.

‘The skin is also fantastic, really delicious. You can make potato chips, oven roast wedges, a whole baked potato, you can use it chopped up in stir fries – it’s a very versatile potato and again, it’s the sweetest of all potatoes.’