A savvy shopper has revealed how she cut her weekly shop from £60 down to as little as £10 by purchasing yellow-sticker items.

Kelly Costa, 40, from Essex, was used to buying whatever grabbed her fancy in the supermarket, but after having to leave her job, she started taking greater care about the things she was putting in her trolley.

Having successfully cut down her food spending, the mother has now shared her top shopping tactics on Instagram.

‘Before becoming a mum to Isabella, now eight, I shopped haphazardly with no regard for what I chucked in my supermarket basket,’ said Kelly, speaking to LatestDeals.co.uk. ‘If I fancied wine, it went in.’ 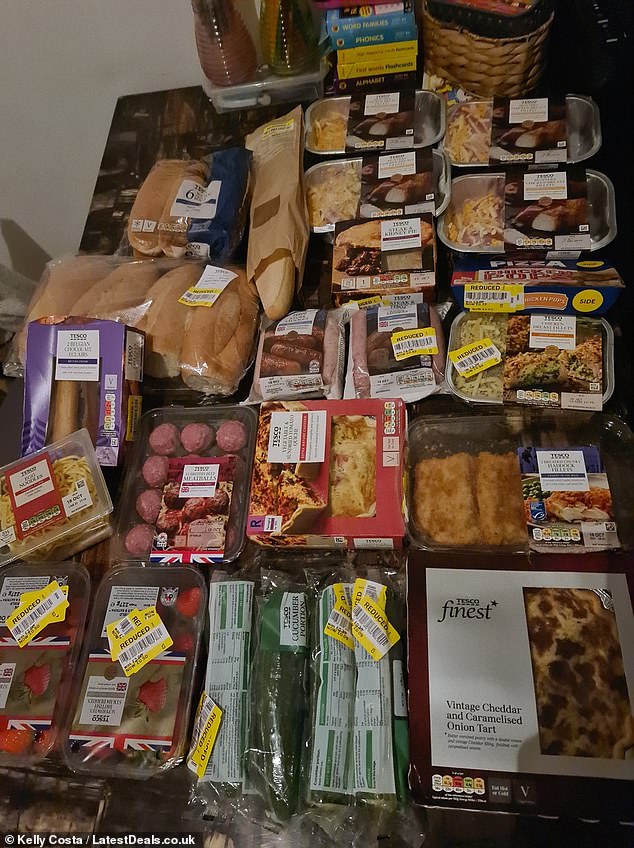 Kelly Costa, 40, from Essex, has saved money after she started buying yellow-ticketed items from supermarkets. Pictured, some of the bargain treats she bought 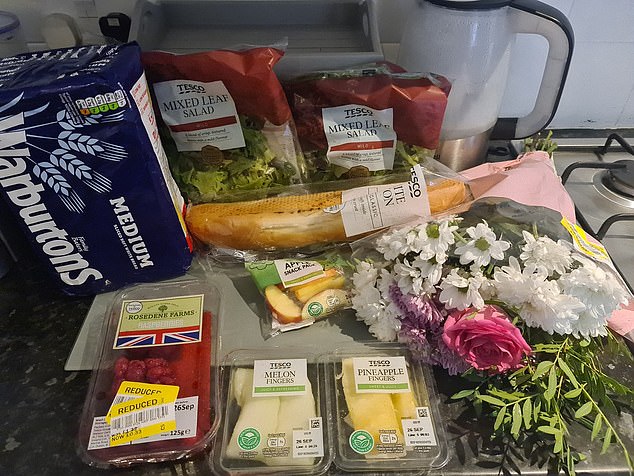 By knowing the time that supermarkets update their yellow-ticketed items, Kelly is able to swoop in and bag herself some bargains. Pictured, a selection of Kelly’s shopping 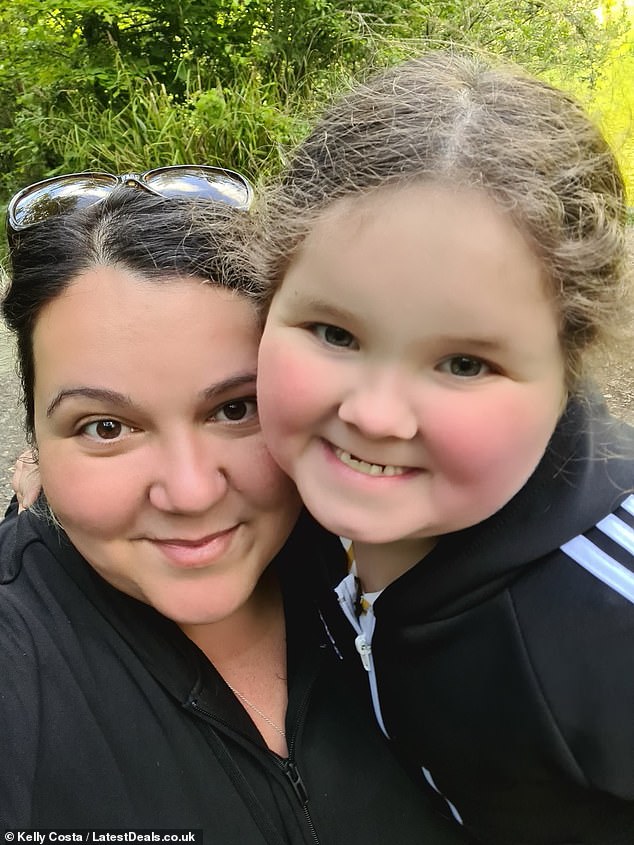 Kelly (left) cares for her daughter Isabella, eight, (pictured right) and had to leave her job to look after her properly

‘I was a successful contract manager on a salary of £32,000 which was plenty for me and my boy Raphael, now 18 and a college student.

‘But then Isabella arrived and at two months doctors realised there was something wrong with her.

‘It emerged she had fluid on the brain and was subsequently diagnosed with macrocephaly, and developmental delays.

‘I continued working for two years but it was too much. The childminder couldn’t deal with Isabella’s extensive needs so I had to leave my job. 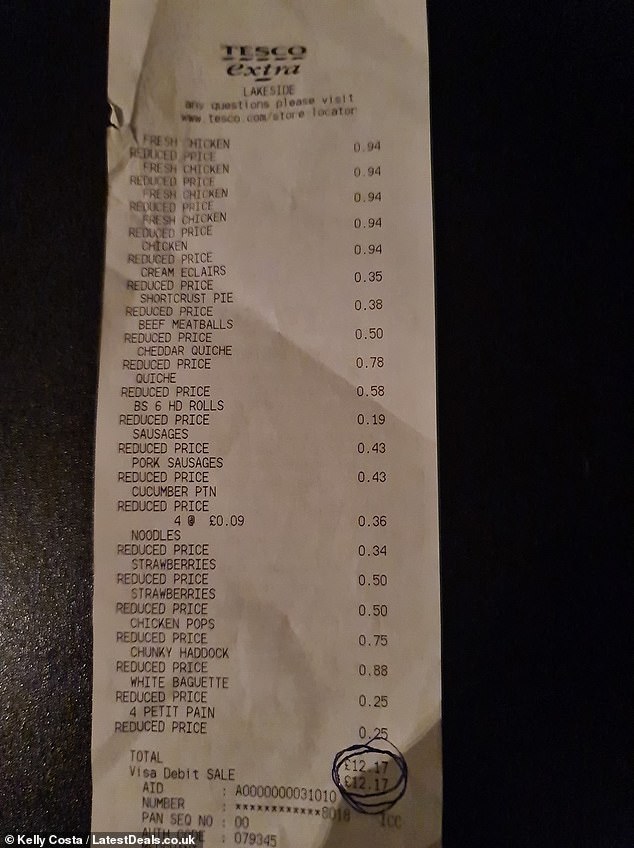 By purchasing only discounted products, Kelly was able to cut her weekly food bill down from £60 to £10 (pictured) 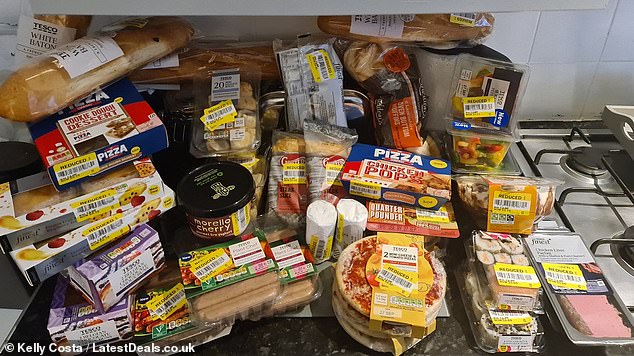 Kelly didn’t want her restricted finances to prevent her providing healthy meals for her children. Pictured, some of the bargain items Kelly has bagged 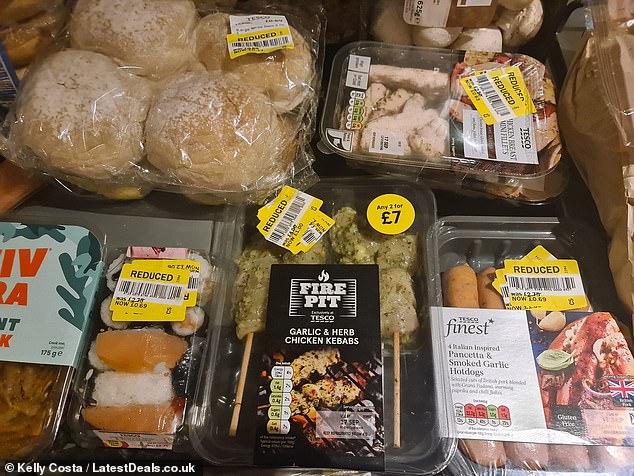 Having grown up near Lisbon in Portugal, Kelly wanted her children to eat dishes traditional to the area she grew up in. Pictured, some of the yellow-sticker items

‘Overnight I went from having plenty of cash to virtually none, surviving on her disability benefit, carer’s allowance and universal credit. Her dad isn’t in the picture and money was really tight.’

However, having grown up near Lisbon, Portugal, Kelly was determined to continue providing healthy traditional meals for her children.

She told a friend that she wasn’t prepared to let her children suffer because times were tough for her.

‘So I looked into how I could buy good food cheaply – and became a yellow sticker shopper,’ explained Kelly. ‘That’s when supermarkets stick yellow stickers on goods as they approach the end of their best before dates.

‘I know what time the supermarkets knock down the prices and head there then, going straight to the reduced aisle. In the past, I’ve got chicken for £1, lamb steaks for 60p, chicken chipolatas for 60p and a smoked steak salmon for £1. 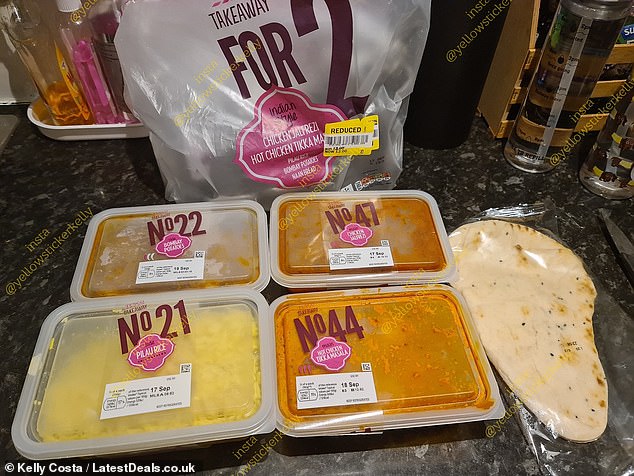 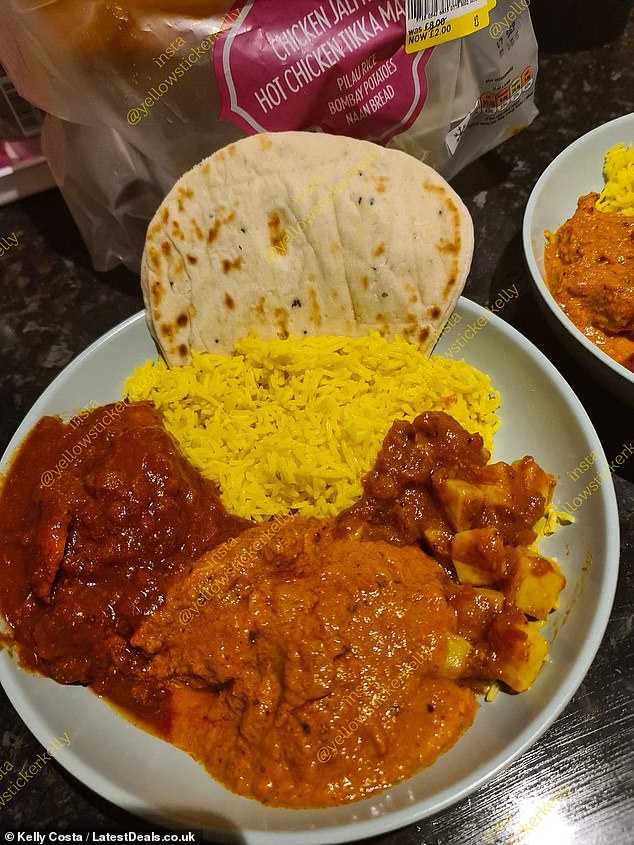 She didn’t want her children to have to suffer just because her income had become more restricted. Pictured, curry

‘I’ve got a two for one Indian takeaway down from £8 to £2 too. Raphael and I enjoyed that.

Kelly doesn’t just stick to one supermarket though and will often travel to the various shops in her area to bag the bargains.

She also isn’t afraid to take any and all yellow-ticket items because she eats everything she picks up, either on the day or over the following couple of days. 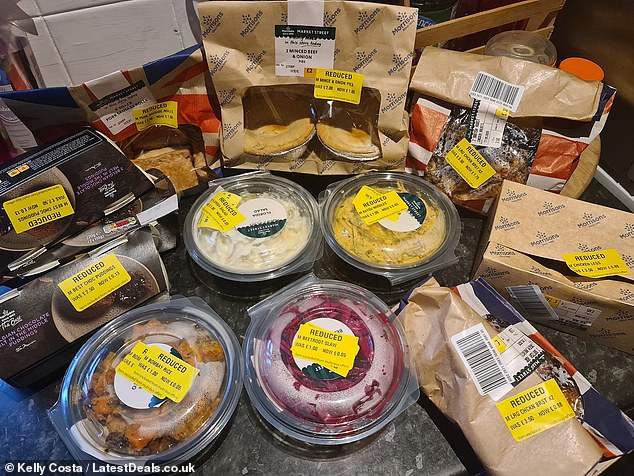 Yellow-sticker items (pictured) are products that supermarkets have marked down at a discount, often knocking up to 75 per cent off the original price 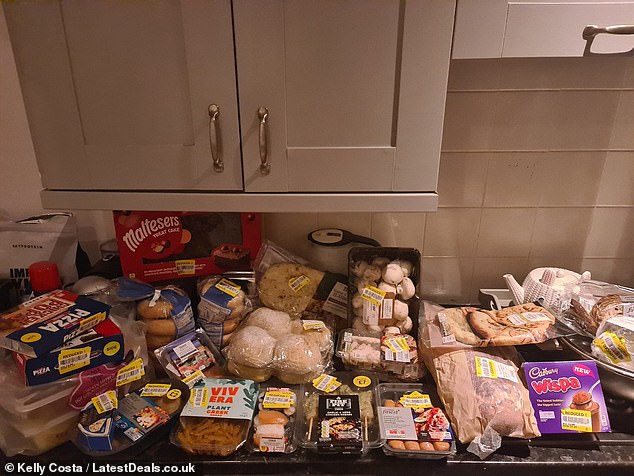 In the past, Kelly has managed to pick up chicken for £1, lamb steaks for 60p and smoked salmon steaks for £1 (pictured)

‘I always advise to shop around, speak to supermarket workers to find out best times, always go to the last reduced section as it’s the biggest and arrive early so you can have a look around before they are repriced down.

‘I’d also advise people to cook from scratch. Instead of takeaways make your own fakeaways and get kids involved so they learn from an early age to be sensible.’

Kelly’s bargain hunting stretches beyond supermarkets though, as she now scours for freebies on apps such as Facebook and Olio – having bagged her two sofas for free.

Tom Church, co-founder of LatestDeals, commented: ‘Kelly’s amazing savings speak for themselves – getting her weekly shop down from £60 to £10 is seriously impressive.

‘I’d echo all her tips: chat to supermarket workers to find out what time your local stores reduce their prices and freeze anything you don’t immediately eat so nothing goes to waste. It’s good for your bank balance – and for the environment too!’ 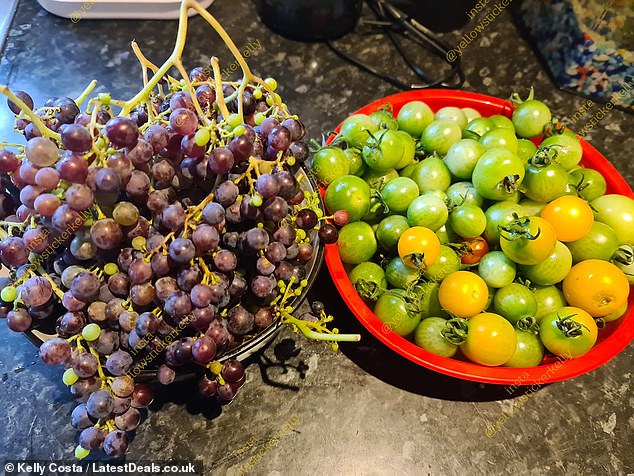 Kelly’s watchful eye scours every type of product in the supermarket, often picking up fruit whenever she can find it on offer 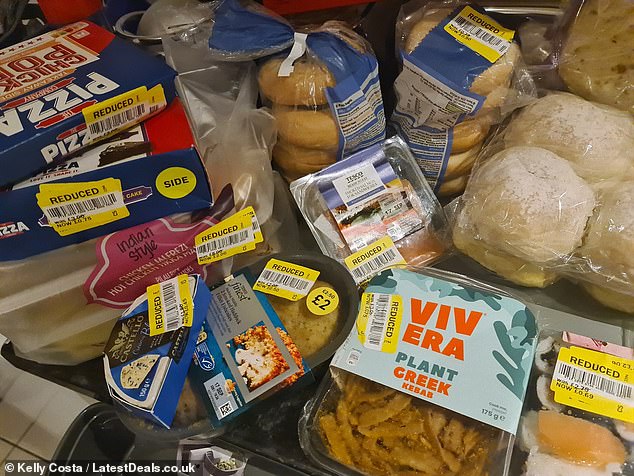 She isn’t ashamed about taking all the yellow-ticket items in a supermarket because she says she always eats everything, either on the day or over the course of the next couple 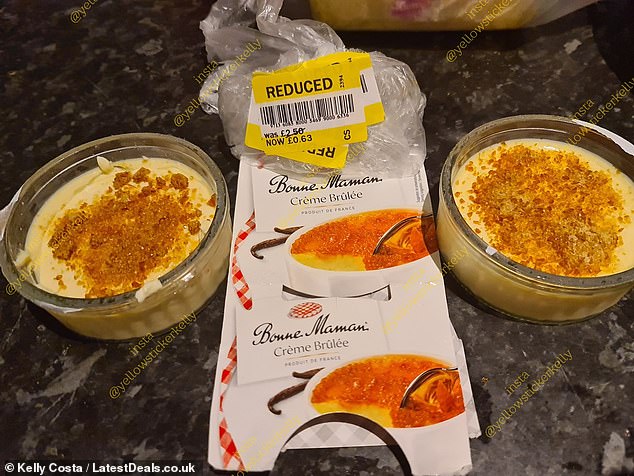