‘I can’t un-see it’: Mum shares the creative school lunchbox she prepared for her child – but parents can’t help but notice one VERY unusual detail

Amused parents are losing their minds over a mum’s seemingly innocent lunchbox stacked with blueberries, watermelon stars and cherry tomatoes.

An angry-looking tomato stole the limelight after Australian mother Mardi posted a photo of her child’s snack box on Facebook.

The box may have been filled with countless colourful treats – but as one woman said ‘once you see it, you can’t un-see it’ referring to the ‘angry’ fruit. 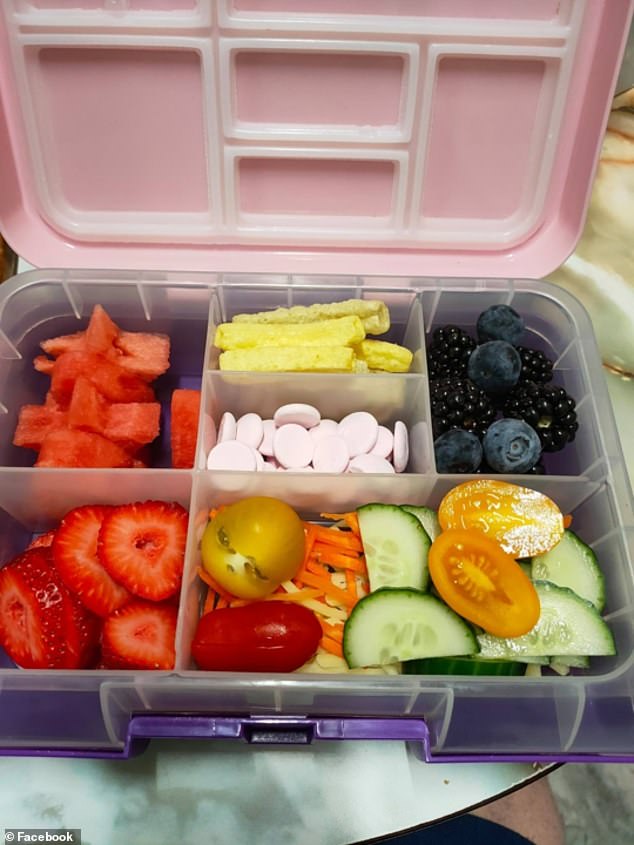 Amused parents are losing their minds over a mum’s seemingly innocent lunchbox stacked with blueberries, watermelon stars and cherry tomatoes

‘Is it just me or is the yellow tomato angry at me?’ one woman asked ‘Can anyone else see it?’

‘I came to the comments for the exact same reason’ another woman said.

‘Oh the angry tomato staring at me freaking me out,’ another agreed.

‘looks like a small alien face,’ said another. ‘I can’t un-see it now.’

‘It took me ages to realise that’s an angry tomato and not a toy.’

‘Looks great but what’s this guy’s deal?’ said another woman, circling the angry piece of fruit.

The lunchbox also appears to have a blueberry which bears an uncanny resemblance to Mike Wazowski from Monsters’ Inc and a halved yellow tomato which looks like a bug.