In her memoir, This Will Only Hurt A Little, actor and producer Busy Phillips opens with an anecdote about a (former) male friend of hers who she describes as “gorgeous and famous and all of the things”.

One day, he says to her, "You know, I think people would consider you really beautiful, if only you didn't talk so much. Your personality is just a lot. Don't get me wrong, I love you, but I think people get distracted by that." 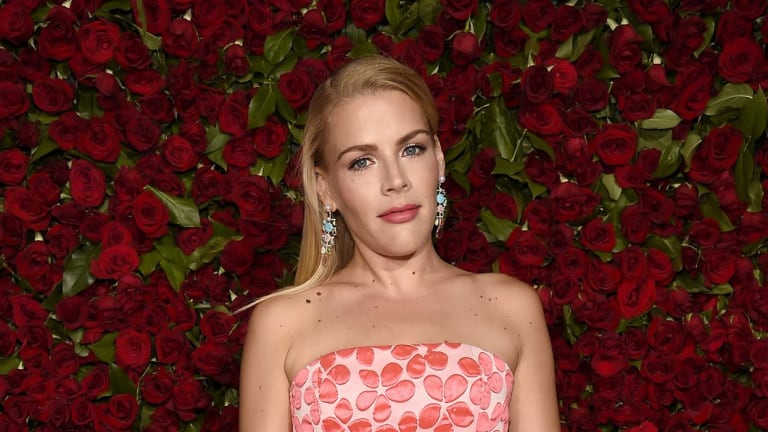 Busy Phillips was told if she just piped down it may improve men’s appreciation of her.Credit:Kevin Mazur

With the benefit of hindsight, Phillips is succinct: “My clear reaction should have been, “Ewww. Go f— yourself."

But then Phillips writes this:

“For so long, even with my strong personality, telling a man to f— off wasn't easy for me to do. Instead, I would just nod and laugh and agree, "Hahaha. Yeah," and then swallow whatever insult and seethe later.”

Reader, I related to this hard. It's a classic example of the bait-and-switch that keeps women second guessing our actions and entire selves.

How can the kinds of men who offer this sort of archaic advice not recognise the extent to which they're really just exposing their own fragility?

If you're a woman with even the vaguest outline of a personality, you've probably been called ‘intimidating’ at some point in your life.

What are they saying about the capacity of other men to view women as equal human beings when they decide that our ‘strong’ personalities put men on the back foot and make them feel uneasy? When they argue, as Phillips’ former friend did, that women are more beautiful when they're quiet and docile and agreeable?

If you're a woman with even the vaguest outline of a personality, you've probably been called ‘intimidating’ at some point in your life.

It might have been by your friend or a co-worker. It could have been your brother or father. It might even have been a lover, someone who should presumably want to partner with more than a walking doormat but who, in practice, doesn't always like being spoken back to or outshone.

You’re just so intimidating. And then, the advice. Guys don't like it when women don't seem like they need them. You've gotta let them have the upper hand sometimes.

Almost all of my female friends have had thus experience at some point in their lives, if not multiple instances of it. If you're any combination of smart, attractive, funny, capable and successful as a woman, you apparently present a challenge to the fragile egos of those men who don't know what to make of all that.

I always thought it was ridiculous to suggest women downplay themselves in order to make men feel less threatened but, like Phillips, in my younger years I was certainly guilty of doing that.

The years-long conditioning that tells girls we need to accommodate men's feelings does a real number on us. We’ll halt conversations with each other the moment a man decides to butt in, unconsciously turning our bodies towards his to make sure he feels included and appropriately admired.

We'll attempt to gently navigate difficult topics without hurting their feelings or making them seem targeted by ours, and then we'll engage in ridiculous acts of reassurance of how much we value and respect them just to offset the damage.

What else is the man-pandering White Ribbon movement about if it isn't making sure men don't seem so intimidated by us scary she-monsters and our scary desire to see fewer women and children killed?

Men aren't directed to curtail their ‘strong’ personalities or demeanours in order to make anyone feel more comfortable, let alone to get women to like them.

The construction of masculinity is so tightly wound up in being assertive and dominant that such an idea seems laughable. Women are bossy, men are the boss.

Women are aggressive, men are ambitious. According to third rate hacks like the wildly-popular-among-men Jordan Peterson, women want to be dominated and led while men rise to the top of the lobster tank … or something.

It's been a long time since I actively muted my personality and intelligence to make men feel less threatened by me, and the relief is palpable.

Unless I’m guided by an instinct for safety (which is another matter entirely) I no longer tolerate intrusive, boring conversations with men just because I'm worried their feelings might be hurt if I ignore them. It's a small act of liberation, but it’s made way for a lot more space in which I can comfortably be me.

Women aren't mirrors held up to reflect the brilliance of men. We shouldn't feel responsible for managing their insecurities. And more significantly, we shouldn't want children growing up thinking these are the roles they are meant to fill.

The crime of being "intimidating" or "too much" as a woman is one that's so often thrown around, but rejecting its insidious implications for us all is an important part of solving the larger problem of gender inequality.

Besides, maybe it isn't that women are "too much" at all. Maybe it's just that the men who care about that are too damn little.