Shan Goshorn, an acclaimed Cherokee multimedia artist who incorporated political activism into her work, died on Dec. 1 in Tulsa, Okla. She was 61.

Her sister Donna Beck said the cause was a rare form of cancer.

Ms. Goshorn ranged across various media in her work, including paint, glass, metal and fiber as well as hand-tinted photography.

“I consider myself an artist who chooses the medium that best expresses a statement, usually one that addresses human rights issues, especially those that affect native people,” she wrote on her website.

Ms. Goshorn was most known for her imaginative basket-weaving. She often integrated photographs into her basketry, in some instances obtained by crowd-sourcing: Native Americans around the country would contribute images.

Other baskets might incorporate strips of paper or plastic with text printed onto them from treaties and compacts with the federal government, or from historic maps or speeches. Some baskets took creative shapes — a briefcase, for example, or an open flame. 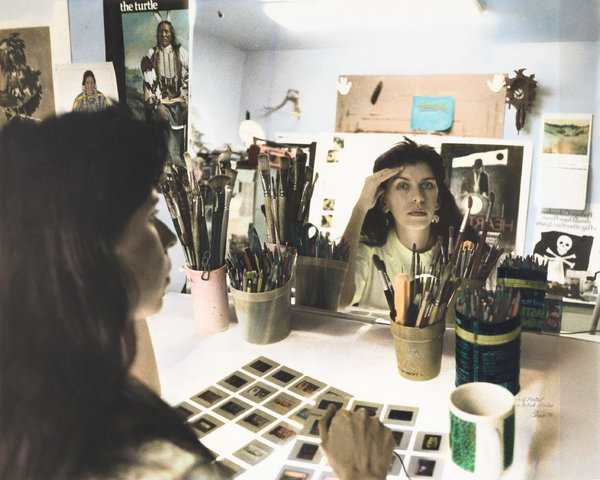 Ms. Goshorn’s work is among the collections of the National Museum of the American Indian in Washington, the Denver Art Museum, the Museum of Contemporary Native Arts in Santa Fe, N.M., the Museum of the Cherokee Indian in Cherokee, N.C., and the North American Native Museum in Zurich. In 2013 she was honored with a Smithsonian Artist Research Fellowship.

She also won acclaim year after year at the Santa Fe Indian Market in New Mexico, an annual event organized by the Southwestern Association for Indian Arts that draws hundreds of thousands of visitors from all over the country.

Debra Shan Goshorn was born on July 3, 1957, in Baltimore to Edna Vera (Saunooke) Goshorn, a nurse, and John Goshorn Jr., who worked for the Army at the Edgewood Arsenal in Maryland. Her mother is Cherokee.

She grew up in Baltimore and graduated from high school there before moving with her family to Cherokee County, N.C., where her mother is from, in the mountainous southwestern part of the state.

She took up Native American art in the summer of 1975, after she had graduated from high school and before going to college. In Cherokee she worked at the Qualla Arts and Crafts cooperative, a job that led her to the Indian Arts and Crafts Board, an agency within the Department of the Interior.

She attended the Atlanta College of Art (now part of the Savannah College of Art and Design), graduating in 1979 with a bachelor’s degree in fine arts. The Indian Arts and Crafts Board soon commissioned her to illustrate, with pen, about 20 traditional Cherokee basket patterns. The exercise taught her the “math and rhythm” of basket weaving, she said.

Ms. Goshorn moved to Tulsa in 1981. (Oklahoma had been the destination of thousands of Cherokee forced off their land in the Southeast by President Andrew Jackson during the 1830s.) But on arriving there some local Cherokee were skeptical of her tribal heritage, she recalled; some even went so far as to call the Cherokee community in North Carolina to confirm it. She married Tom Pendergraft in 1985.

In Tulsa she was inspired by Native American artists who incorporated political themes in their work, and in 1992, in response to the 500th anniversary of Columbus’s voyage to North America, she started doing the same, focusing on human rights issues. An early example was “Honest Injun,” a series of hand-painted black-and-white photographs of products that use Native American iconography or names.

It was not until 2008 that she turned to basket weaving as an art form. The craft is usually passed down through generations, but because no one in her family had known how to weave baskets, Ms. Goshorn taught herself.

Her relationship with the Smithsonian Institution allowed her access to its National Anthropological Archives and the archives of the National Museum for the American Indian, an arm of the Smithsonian, to research historical baskets, documents, letters and treaties, which she began using in her artwork.

“Shan was an extraordinary artist whose work confronted painful histories and ongoing injustices, while honoring the strength and resilience of Native American people and cultures,” said Kevin Gover, director of the museum.

Ms. Goshorn died at a Tulsa hospice facility. In addition to her mother and Ms. Beck, she is survived by her husband; a daughter, Neosha Pendergraft; a son, Loma; another sister, Diane Goshorn; and three stepdaughters, Natalie, Carolee and Sommer Pendergraft.

An earlier version of this obituary misspelled Ms. Goshorn’s surname in several instances, including the headline. It was not Gorshorn or Gorshon.