When the second Captain Marvel trailer dropped at the halftime on Monday Night Football, fans were over the moon to learn more about their new hero. The trailer revealed Danvers doesn’t remember her own history so this will be a movie where she discovers her own origin story right along with the audience. But the old adage about never working with animals or children once again held true, as the entire clip was stolen by Carol’s pet cat, which reduced Nick Fury to a baby-talking puddle. But who is the cat in the Captain Marvel trailer? She’s actually an important character.

Captain Marvel has a pet cat here on Earth, who, in cat-like fashion, adopts herself a friendly staffing when Danvers first moves in, as cats do! Danvers has zero suspicions about the creature, believing herself to have been chosen by a real earthbound cat, who she names Chewie after her favorite character in a movie, Chewbacca.

Due to Disney now owning both Lucasfilm and Marvel, it would seem the MCU felt the need to change the cat’s name, just to reduce confusion and needless distraction. (Not to mention Lucasfilm complaining about the competition.) Carol’s cat is now dubbed "Goose," a reference, no doubt, to her Top Gun-like origins.

But Goose is not just any cat, a fact Danvers might have picked up if she was aware of cat genetics. Orange tabbies are almost always male (80 percent of the time). Sex-linked traits like fur color ride on the X chromosome. One X chromosome = one color. (There are some female orange cats, but they’re rare.) So if a female orange cat shows up at your door, always check to see if it’s the real deal or an alien who happens to resemble a cat.

In this case, it’s definitely the latter. Goose is a Flerken. The way one can tell the difference is Flerkens lay eggs and carry pocket dimensions inside their little fuzzy bellies. This gives a whole new aspect to reaching to give a tummy rub and getting caught in a "bear trap" of a cat’s claws. But at least if one needs to make a quick escape, one’s cat can provide a tidy hiding spot. 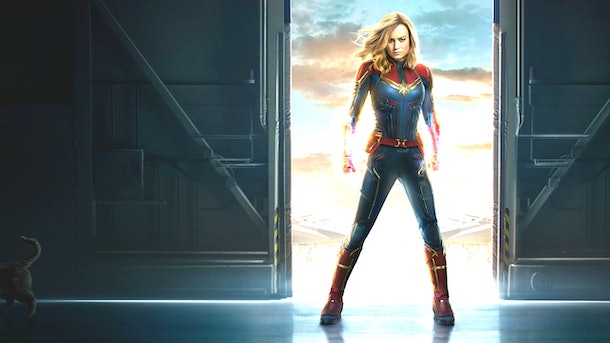 Also, Flerken have a big mouthful of tendrils with a mouth inside it, which are their defensive weapon. Rule number one with a Flerken, never skimp on the wet food.

In the comics, Danvers finds out the truth about her kitty when she lays her eggs, and over 100 Flerken are suddenly born out of nowhere. (Try explaining this to the rescue shelter.) Whether or not this will occur in the film is to be determined.

But perhaps the most important thing to know is Flerken and raccoons do *not* get along. So when Avengers 4 rolls around, Rocket is most likely going to start plotting how to use the newest Avenger’s pet for target practice.