If Season 1 of The Marvelous Mrs. Maisel had you craving brisket at a Formica table, plan a trip to downtown New York for a taste of 1950s deli fare ASAP. While the Emmy-winning comedy’s Midge Maisel held meetings and stole butchers’ attention at her local delis, Amazon Prime has brought one of New York’s landmark delis back to life to celebrate the arrival of the series’ second season. The Marvelous Mrs. Maisel Carnegie Deli pop-up is a delicious blast from the past, and this experience is one Season 2 appetizer worth snagging.

ICYMI, The Marvelous Mrs. Maisel took a post-Emmy Awards victory lap by descending upon New York with a vintage twist. Although the original Carnegie Deli closed in 2016 after nearly 80 years of service, what fits the period comedy’s aesthetic more than the idea of a Jewish deli in Manhattan? Suffice to say, Amazon resurrected the deli’s name to create a lunch joint that even Susie (Alex Borstein) would be proud of. From Dec. 1 through 8, the Lower East Side is home to the marvelous Carnegie Deli pop-up, equipped with ’50s decor and Maisel-themed sandwiches.

As a Long Islander who once had to explain what a deli was to a Midwesterner, I was eager to travel back to 1958 for an evening and visit the pop-up for a special VIP event. While the buzz throughout the deli can only equate to a 2018 crowd at an Instagrammable location, seeing its photo wall of ’50s stars and the waitstaff’s old-fashioned uniforms successfully completes your time warp. If you listen closely, you’ll even hear some timely hits from the show’s soundtrack play throughout the room. 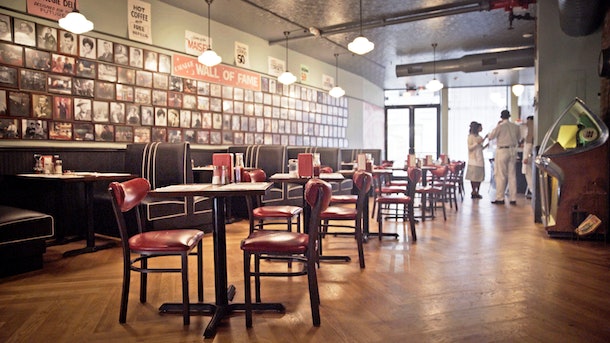 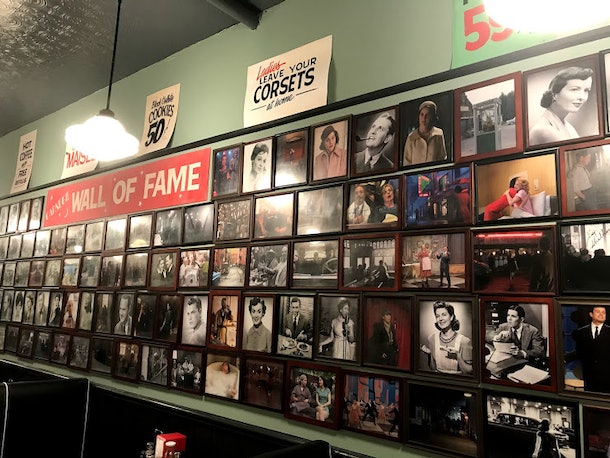 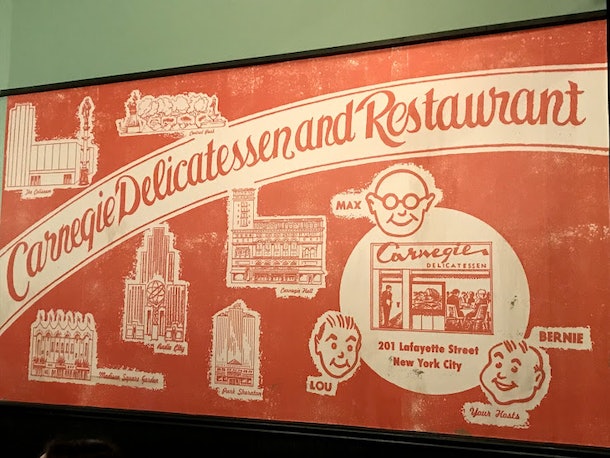 One of the hosts, clearly playing the part of deli manager, greeted my friends and me soon after we were seated. He shook our hands with the friendly grip of the neighbor who hangs out at the local diner with your grandpa and told us, "Everything is good, so get everything."

Although it seems limited at first glance, the deli menu satisfies both your belly and wallet. Boasting prices fitting for the 1950s, the food is technically free, but these costs are suggested donations for the Lower Eastside Girls Club. 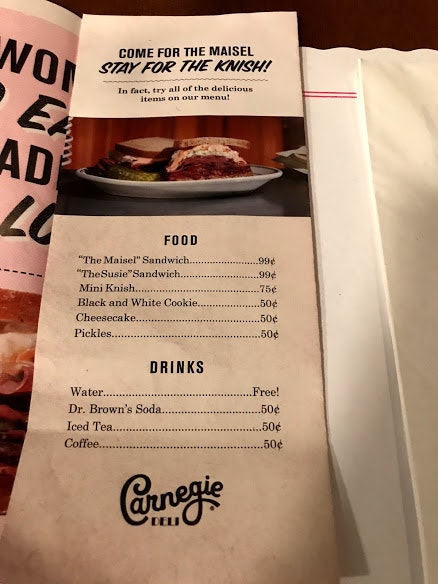 The star of the menu is the Maisel, a pastrami and salami sandwich "for women who eat." The dish looks daunting, and given our packed table of food, our group of three split it. As a rotating lineup of hosts and waiters stopped by to check in, we managed to swallow bites just in time to point toward the Maisel as our favorite item. Gals, this sandwich totally got the job done. 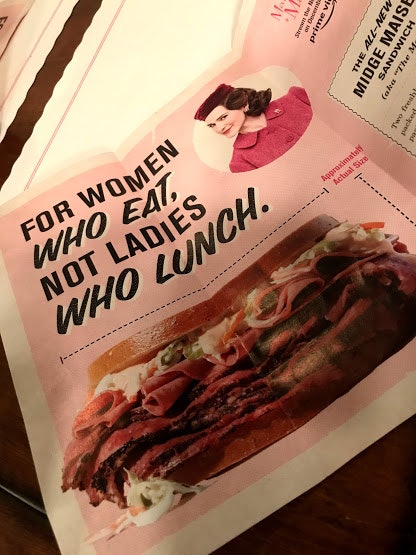 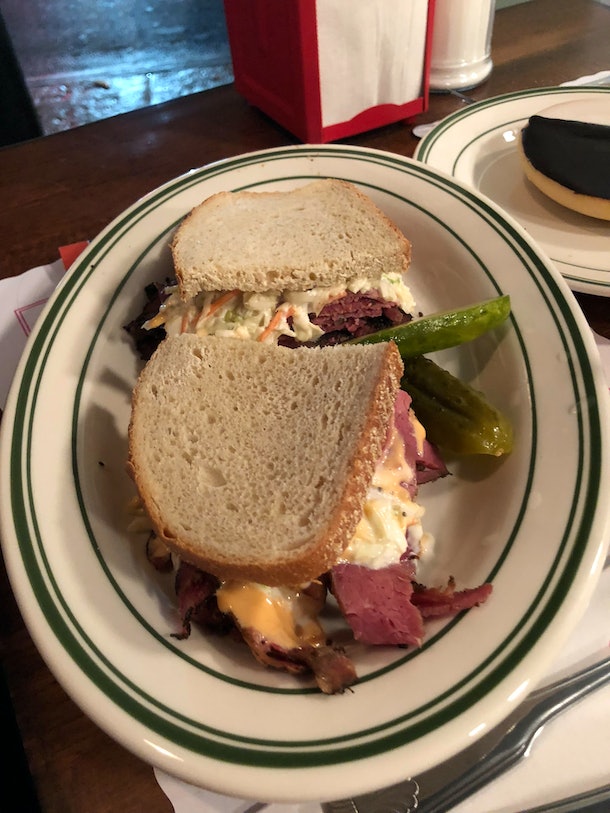 In addition to the Maisel, we filled up on mini knishes, the Susie sandwich (turkey with coleslaw and dressing), a black and white cookie, and a divine piece of cheesecake. Say what you want about the calories, but being reacquainted with the simplicity of deli food was definitely an unexpected culinary high. 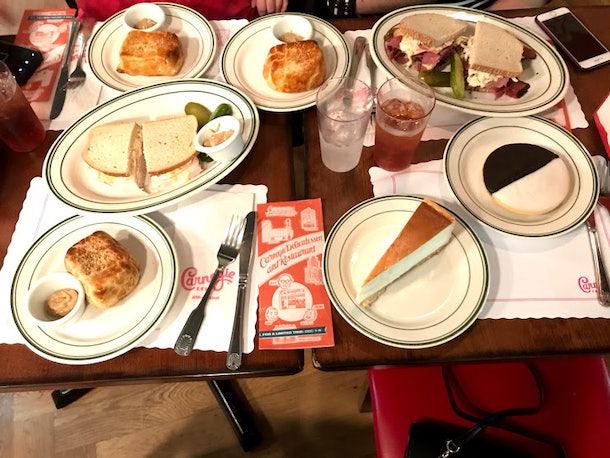 As we cleared our plates, the only thing missing from the visit was an interactive element. After all, if you go to a Disney character breakfast, you want to see a princess or two, right? While the Marvelous Mrs. Maisel cast visited the deli the day before us, diners still received a message from Midge before leaving. We hadn’t realized our meal was free until our waiter arrived with the personalized check, saying, "It’s on Midge tonight." 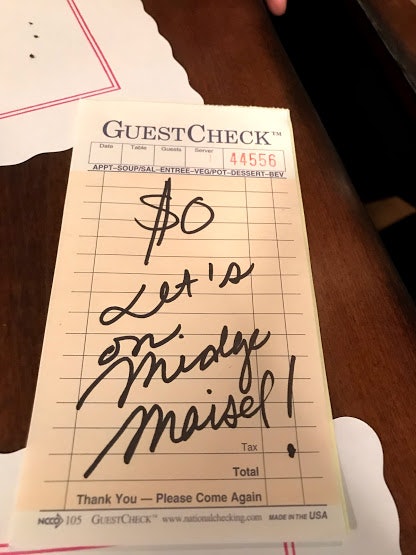 She may not have made it to our dinner, but Midge is clearly willing to strike up a friendship with anyone stopping by for a quick bite at the Carnegie Deli. While reservation spots are now completely booked out for the rest of the week, the deli has a waitlist option and offers the Maisel and the Susie for takeout.