It’s no secret that John Krasinski is wife Emily Blunt’s number one fan (he’s admitted to watching the The Devil Wears Prada "75 times" and bawling his eyes out during Mary Poppins Returns, in case you had any doubts), and I was excited to see the couple take the red carpet at Jan. 6’s Golden Globes. After all, it’s a big night for the British actress, who could potentially take home a Golden Globe trophy in the Best Actress – Motion Picture – Musical or Comedy category for her work in the Mary Poppins sequel. These photos of John Krasinski and Emily Blunt at the 2019 Golden Globes show they’re the awards season couple to watch.

One day after hitting the red carpet together for the BAFTA Los Angeles Tea Party at the Four Seasons in Beverly Hills, the awards season power couple was back making the rounds at the Golden Globes on Sunday, Jan. 6, and Krasiniski was on the red carpet with his wife. In addition to supporting Blunt’s work in Mary Poppins Return, the powerhouse pair have also both been celebrating recognition for their joint film A Quiet Place, which has made their schedule jam-packed. On Friday, Jan. 4, Blunt and Krasinski looked every inch the A-list couple while enjoying AACTA International Award nods for Best Supporting Actress (for Blunt) and Best Screenplay (for Krasinski) just hours after their appearance at the 2019 AFI Awards. It’s been a busy awards season, but Krasinski proved himself to be his wife’s biggest supporter once again at Sunday’s soiree.

While A Quiet Place was nominated for "Best Original Score" at the Golden Globes, the evening was all about Blunt’s triumphant turn as the magical nanny in the Disney reprisal. Krasinski suited up while the British star glowed in silver — and their loved-up display on the red carpet is everything we need after all the tough celebrity breakups of 2018. I mean, just look at them cozying up on the carpet. 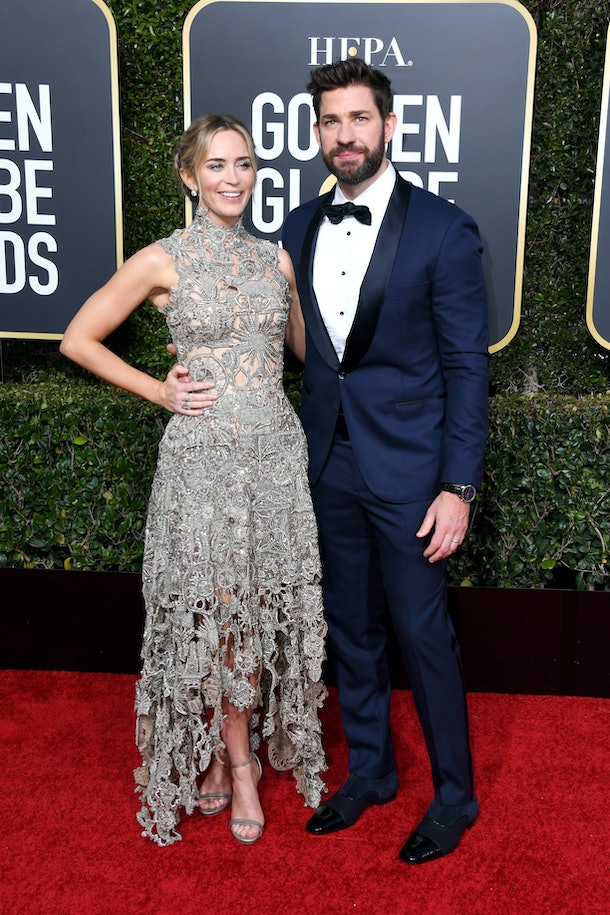 Look at all that love.

In case you needed further proof that the pair are Hollywood’s current golden couple, the 35-year-old star gave us another example of why Krasinski is #husbandgoals after he admitted that her performance in Mary Poppins Returns brought him to tears. Literally.

After Krasinski revealed to Ellen DeGeneres that he was pretty much an emotional wreck while watching the film ("I was pushing through all the bagels and muffins that were in the back looking for napkins," he told the host. "I was like, ‘I need anything to stop this crying!’ I was crying so much! I blew through the tissue box in 20 minutes.") — Blunt shared her own perspective on the emotional response, and it’s so sweet.

Also, these two couldn’t stop holding hands on the red carpet. Really, why would they want to, though?

In an exclusive interview with Us Weekly on Friday, Jan. 4, Blunt explained, "I think a lot of people cry watching this film. People almost talk about it like, ‘John Krasinski cried watching this film. But it was wonderful to see him that emotional about it, and I think he himself, amongst other people I’ve spoken to, have said they don’t know why they are so emotional about it."

OK, they literally shined on the carpet.

The pair have been married for eight years and counting, and it sounds like the key to their long-lasting union is finding an S.O. that’s your biggest cheerleader.