I was never the girl who imagined getting married; who envisioned exactly what splashy white dress she'd wear, or who'd been plotting out every detail of her "fairytale day" since age seven.

In fact, as a teenager, I was quite the opposite. With divorcing parents, I indignantly decided marriage was archaic, patriarchal and doomed to fail. 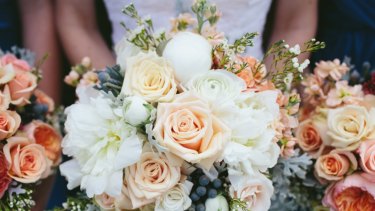 In 2019, why are millennials still getting married?Credit:Stocksy

And yet here I am, with a fast-approaching wedding day, happy but unsure exactly how I got here.

Over the course of the year since getting engaged, I've been asked many times why I decided to get married. Unsure how to answer, I'd rattle off a vague list of the reasons why my partner is the bee's knees.

But the question would remain marinating at the back of mind: Why am I even getting married at all? Why do any of us?

I come from a generation of women raised by feminist parents, taught to be independent, encouraged to dream about our careers, not weddings. Society doesn’t expect millennial couples to get married, and yet we are still doing it in droves.

Since 2001, Australian marriage rates have been relatively stable, with minor year-on-year fluctuations.

In 2001, Australia’s crude new marriage rate was 5.3 per 1000 people. A decade later in 2011, this number was 5.4 per 1000 people. And in 2017, the rate was 4.6 per 1000 people, however the Australian Bureau of Statistics states amendments to the Marriage Act in 2017 to legalise same-sex marriage may have impacted the registration system, resulting in this figure being understated.

University of Melbourne sociologist Professor Belinda Hewitt finds the country's steady marriage rate interesting because, realistically, the difference between de facto and married couples today is zilch aside from the rings on their fingers. So, logically and financially, it makes little sense.

“Laws around property distribution and custodial arrangements with children are essentially the same for cohabiters.

“Marriage is no longer an economic necessity, and is free from religious and patriarchal pressure.”

Marriage isn’t being thrust on couples just because they’re having kids, or because they’ve been together for two years and "it’s time".

Today, more than 80 per cent of couples are already sharing a home before they marry.

Professor Hewitt says the motivations for marriage have changed drastically, and she believes it’s now primarily about what it symbolises for couples.

“It’s a choice. It’s a higher level of commitment. It’s a statement you want to make with your partner,” she says.

“People are together for longer before marriage and really thinking about it.”

Aleisha McCormack hosts the popular Bridechilla podcast, attracting 60,000 listeners a month, most of whom are brides.

“There is a general feeling that marriage is important because people see it as a sign of commitment coming together as a union… It’s not connected to religion or feeling they need to consummate this or for any reason other than saying ‘this is who I want to be with’,” Ms McCormack says.

“They’re not doing this out of obligation, most couples are already living together and sharing their lives.”

With almost four-fifths of weddings now overseen by a civil celebrant, Ms McCormack says a drawcard for couples is the freedom to personalise a ceremony, write their own vows, and ditch traditions they may find meaningless or sexist.

Then there’s the allure of the party – the reception. The significance of throwing a big bash to celebrate your love with all your favourite people shouldn’t be scoffed at.

“My husband and I, when we think about our wedding, we think how amazing it was to bring all these people together in our lives… It’s a rare and wonderful thing,” Ms McCormack says.

And being in the digital age, Ms McCormack says Instagram also has a part to play in the appeal of weddings.

“The influence of gorgeous imagery and the look of low-key but very styled events is appealing for people.”

But there’s a limit to its influence, she says.

“Millennials get a lot of shit, but I truly believe that people are focused on the relationship over the aesthetics of a wedding.”

Women who have been married in the last few years echo the sentiments of MsCormack.

Kate* got married in November after 10 years with her partner.

“Deciding we wanted to share the rest of our lives together, I wanted to celebrate that and have people celebrate it with us.”

For Lily*, it was seeing a relative lose his wife that convinced her and her partner to get married.

“Seeing the joy in his eyes speaking about their marriage in the toughest weeks of his life made us realise that celebrating our relationship was something worth doing and a way of celebrating the bringing of our families together,” she says.

“We were both very conscious of the patriarchal origins of marriage and wanted to ensure we removed ourselves from that… We didn’t do things just because it is tradition.”

Marie*, who got married two years ago, believes even if it’s not expected, marriage is “still a powerful cultural force that people attach a lot of meaning to”.

“There’s just something really special and lovely about making that commitment to one another in front of your family and friends,” she says. “Life is short and we should celebrate love and relationships when we can.”

So if my teenage self asked me why the heck I’m getting married – and thumping my bank account in the process – I would tell her the decision to do so is a truly beautiful thing.

In 2019, a wedding is not just “the next step”. It comes after a lot of discussion and communication and soul-searching as a couple. It is a leap of faith, an act of vulnerability, a vote for love, a hope for forever.

Yes, marriage may not be expected nor needed, it may even defy logic, but perhaps that makes it even more precious. In a world that is rapidly changing and filled with gloom, I can’t think of many things more special than taking a day to celebrate love, to profess you want to spend the rest of your life with another person.

And it’s a choice I’m so glad I’ve made.