Anonymous is a coward. It was a singular act to take to the op-ed pages of The New York Times in September 2018. (‘‘I am part of the resistance inside the Trump Administration. I work for the President but like-minded colleagues and I have vowed to thwart parts of his agenda and his worst inclinations.’’) While provocative and compelling at the time, this pony has turned his one trick into a 250-plus-page book without enlightening us one whit further about the pathology that is Donald Trump in the Oval Office. 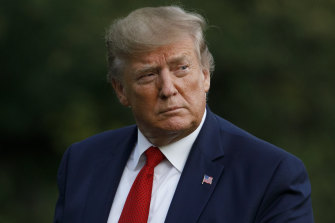 According to Anonymous, Donald Trump has pushed out every adult in the room.Credit:AP

The White House witch-hunt for the traitor has not yielded a corpus. Unless we are dealing with a George Sand Republican, the author is decidedly white male; well educated (there is a disquisition on Hayek on authoritarianism) with a penchant for the classics (a major lecture on Trump as Cleon, who aided the destruction of Athenian democracy).

Our scholar-insider-patriot has chapter headings with profound quotes from past presidents, all to imbue in us reverence for the way things were with these un-Trumpian predecessors. With his granular mood in discussing national security issues and Trump’s attacks on the intelligence community, Anonymous is likely an intelligence officer.

A Warning does nothing to advance our knowledge of who Trump is and what he does. There are no new blockbuster anecdotes. The stories about attorney-general Jeff Sessions, Jim Comey, the wall, Robert Mueller, Trump’s use of the pardon power, Putin, Kim Jong-un, Mohammed bin Salman: all have been amply, and more richly, reported by others. 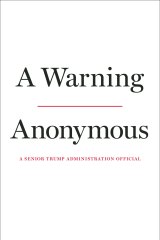 Anonymous depicts Trump as the betrayer of Republican principles, most especially his repudiation of fiscal conservatism and free trade. We are given little high-school civics lessons about the US government, such as that Congress does not move fast because of its constitutional design, and that the Senate has advise-and-consent responsibilities for executive appointments, and on Congress’ oversight responsibilities. Thank you, sir, for these compass settings.

The grievous flaw in Anonymous is his litany of the catastrophic shortcomings of this President coupled with his failure to resign on principle. Trump fails on foreign policy: ‘‘No one knew what page the President was on. We had no idea what he’d do next and it wasn’t obvious the President did either.’’

Trump is a threat to the Republican Party. The Trump team is ‘‘confounded’’ by his rhetoric. ‘‘The White House is broken.’’ Officials are on a ‘‘death watch’’. The real chiefs of staff are Trump’s children, and Fox News hosts. There must be a closet in the West Wing where spines are stored: ‘‘What’s depressing is how many people around him are remaining quiet.’’

Anonymous relates all the above – and does not quit.

Anonymous claims membership in the ‘‘Steady State’’, the ‘‘public servants who push back against … reckless decisions … They give the President their best advice and speak truth to power.’’ When they fail to bring Trump to his senses, they work to ‘‘limit the fallout from decisions that will have deleterious consequences’’.

[The White House is] like showing up at the nursing home at daybreak to find your elderly uncle running pantless across the courtyard and cursing loudly … as worried attendants try to catch him.

But during Anonymous’ tenure, every ‘‘adult in the room’’ has been pushed out. Everyone around the President is an enabler now, from Trump’s Twitter feed to his chronic lies.

The marginal benefits of A Warning are of momentary mirth. The White House is ‘‘like showing up at the nursing home at daybreak to find your elderly uncle running pantsless across the courtyard and cursing loudly … as worried attendants try to catch him’’. Kellyanne Conway is a “reality contortionist’’. But these are not worth the price of admission.

‘‘I cannot overstate the consequences of re-electing Donald Trump,’’ Anonymous writes. But if you want to take Trump out, you have to come clean.

As of today – right now, in real time – have you learnt nothing from the impeachment hearings? Next to Dr Fiona Hill, Lieutenant-Colonel Alexander Vindman, ambassador Marie Yovanovitch – who work alongside you in the executive branch, and who testified in public and under oath on Trump’s abuses of power – you, sir, are a profile in cowardice.

Bruce Wolpe is a senior fellow at the United States Studies Centre at the University of Sydney.