An intense winter storm is hitting much of the southern U.S. It has already dumped more than 10 inches of snow in some parts of Texas. Hundreds of thousands of people have lost power and thousands of flights have been canceled or delayed.

First responders in Texas and Louisiana rescued drivers who spun off ice or stalled in flooding. Governors in Virginia and North Carolina already declared emergencies as the storm moves east. Authorities are urging people from Texas to Virginia to prepare candles, flashlights, batteries and plenty of blankets.

The National Weather Service said a “prolonged period of snow” began late Saturday and would last until Monday in the region, with the heaviest snow expected in northwest North Carolina and southern Virginia. Forecasters have said some mountain areas of North Carolina could get up to 12 inches of snow or more.

More than 400,000 power outages have been reported across the region with the majority of those — about 246,000 — in North Carolina as of Sunday afternoon, according to the tracking site poweroutage.us. More than 99,000 were without power in South Carolina, while a total of more than 55,000 outages were reported across Tennessee, Alabama and Georgia. 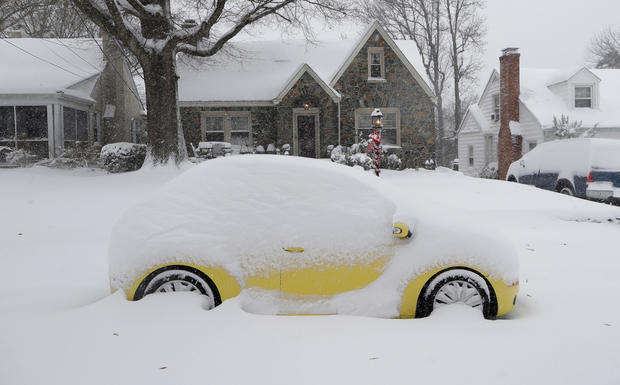 A snow-covered car is parked outside a home in Greensboro, North Carolina on Sunday, Dec. 9, 2018.

Charlotte Douglas International Airport, the sixth busiest airport in the country, said American Airlines would reduce its operations starting Saturday evening. American has also issued a travel alert for nine airports throughout South and North Carolina, Tennessee and Virginia, meaning passengers may be able to change travel plans without a fee.

There were totals of 8,886 flights delayed and 1,883 canceled across the U.S. on Sunday, according to FlightAware.com. Travelers were advised to check their flight status before heading to the airport. Cancellations were reported on flights from as far as the Midwest.