The Kop chief made seven changes to his starting line-up after their dramatic derby win over Everton on Sunday. 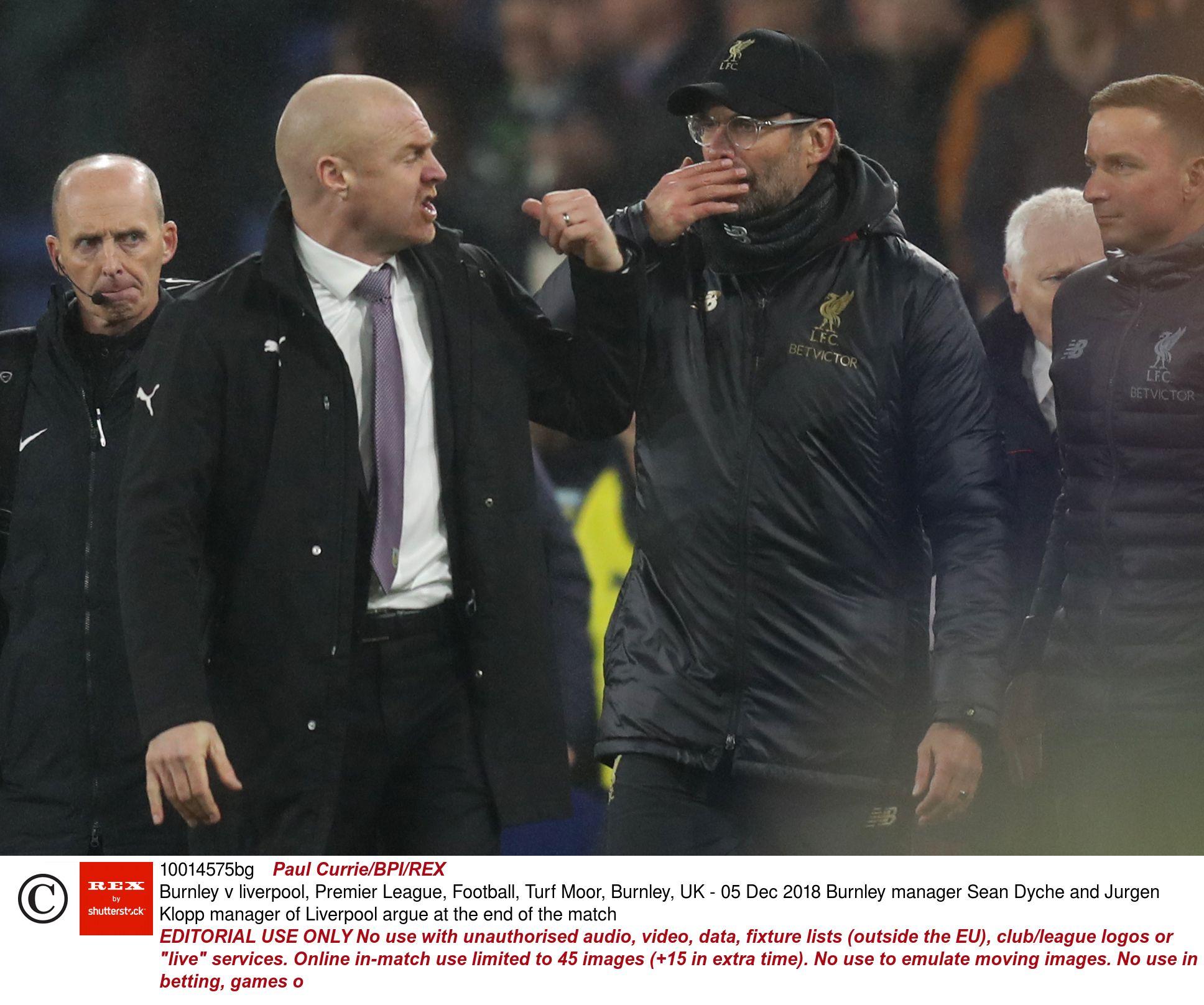 And for almost three quarters of the game it looked set to backfire against Sean Dyche's spirited Burnley.

But two goals in five second half minutes turned the game on its head and put the Reds back to within two points of the top.

It needed Roberto Firmino – one of the men given the night off by Klopp – to climb off the bench and tap in the winner with his first touch.

So they could now jump above champions City to the summit – for a few hours at least – by beating Bournemouth on Saturday lunchtime. 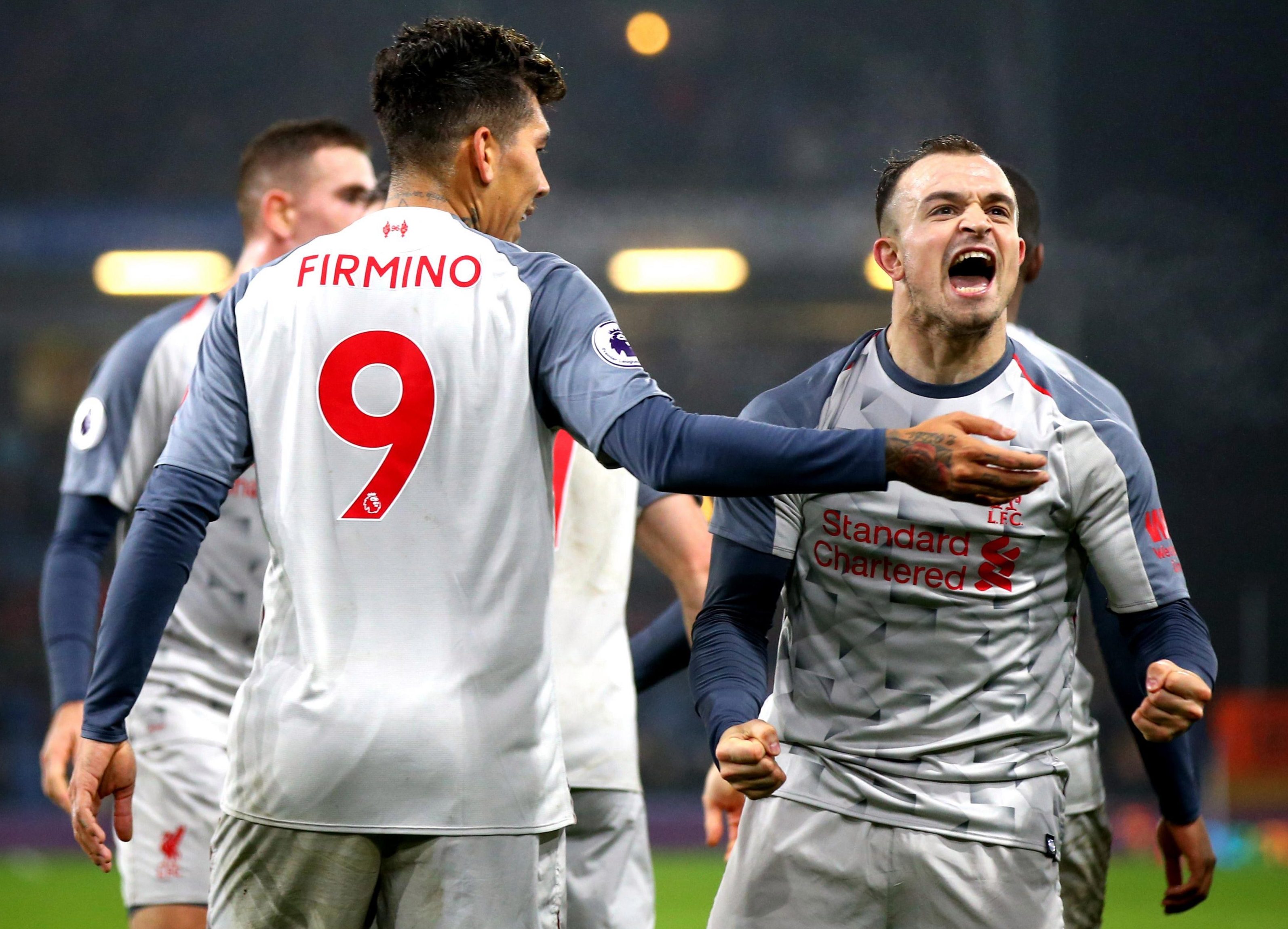 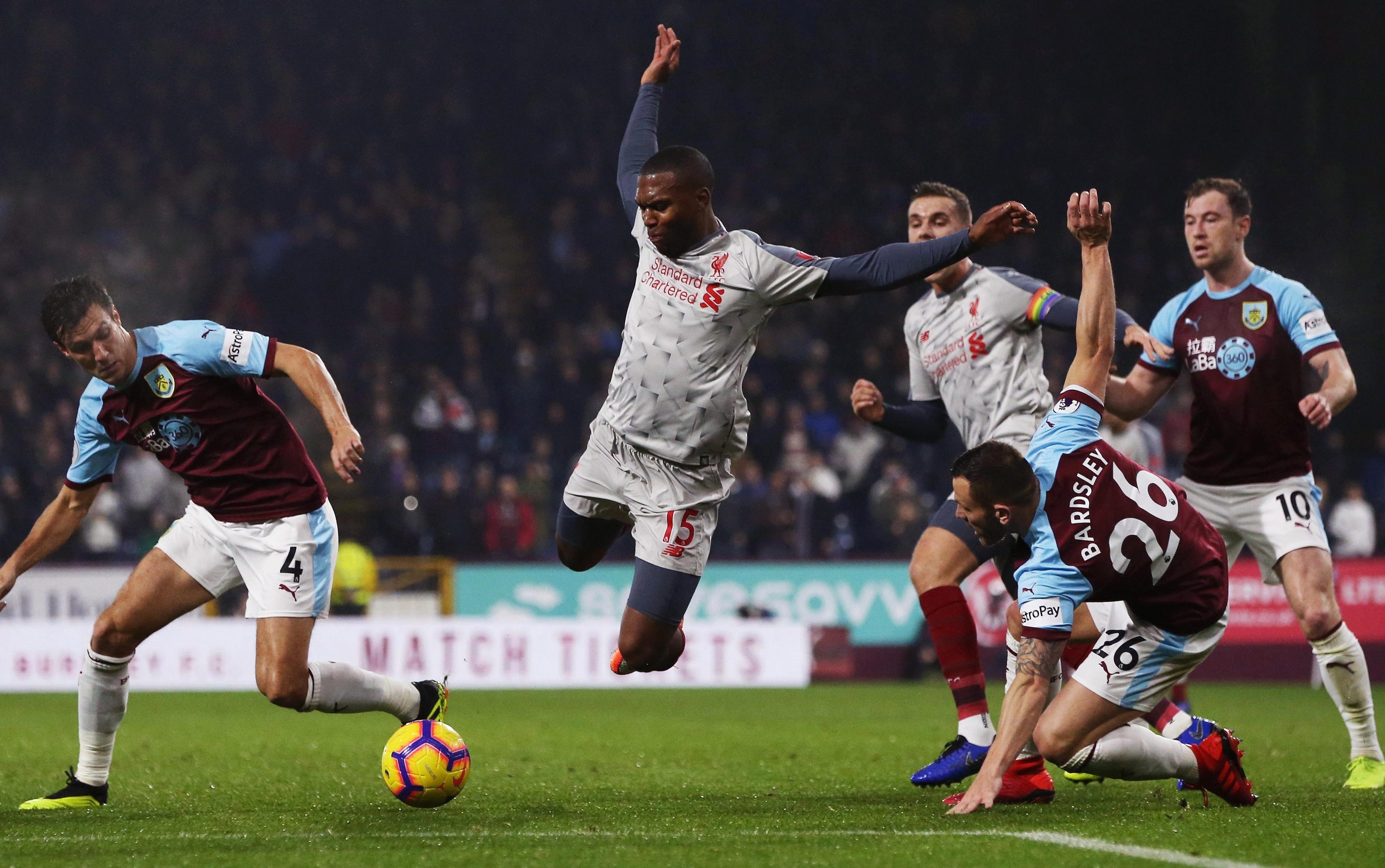 As soon as the team-sheet dropped it looked a huge call from Klopp – even allowing for Burnley's dismal recent form of just one point from six matches.

Almost 12 months ago to the day, the Clarets beat Stoke to move into the top four and went on to claim a Europa League place.

This season, Sean Dyche's men have found things altogether tougher and – with trips to Tottenham and Arsenal to come – will do well to be out of the bottom three at Christmas.

Even so, they started as though they fancied this one. 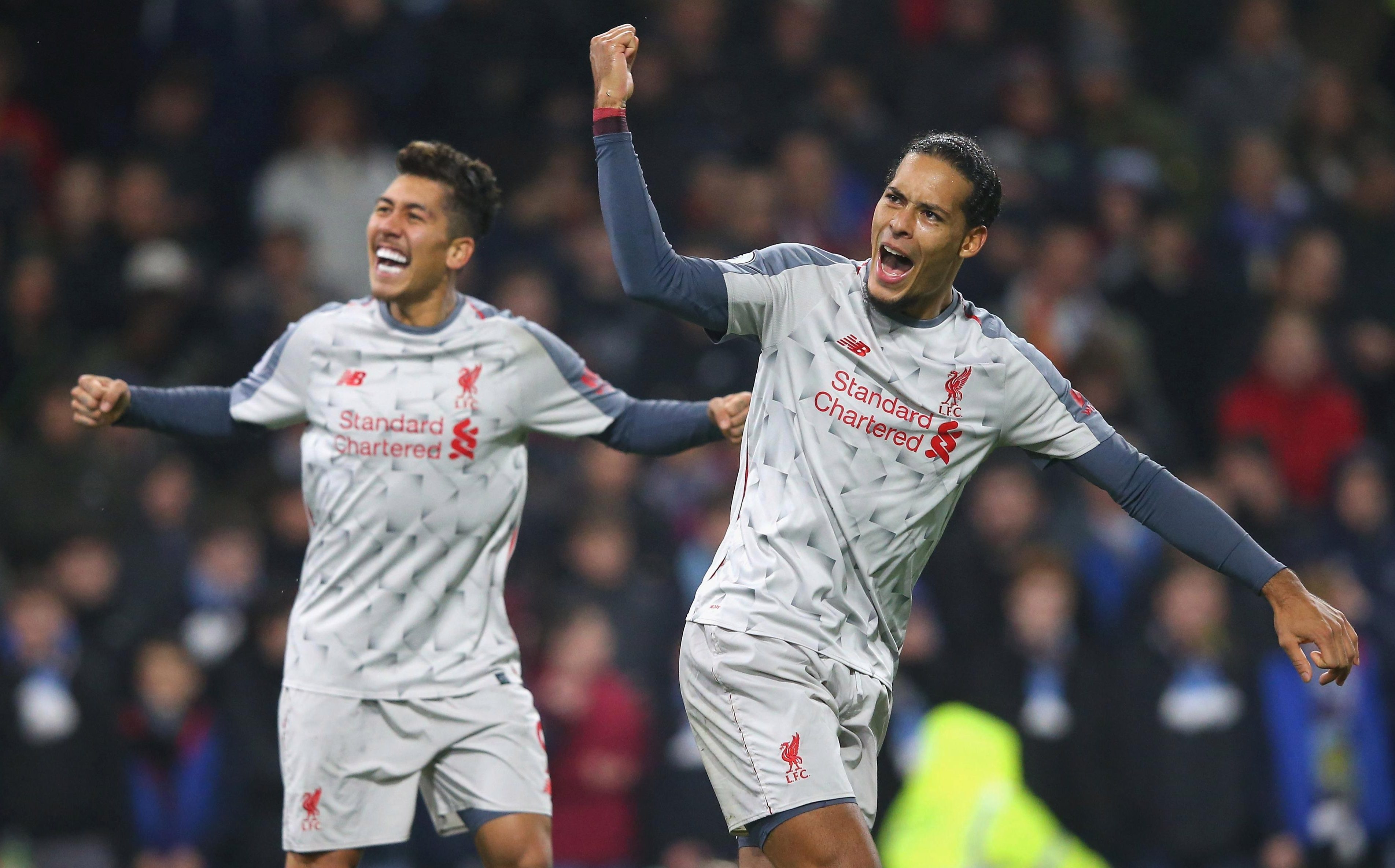 Ashley Barnes lobbed a ball over to Chris Wood who looked to be clear but the Kiwi delayed too long waiting for the ball to drop – and the chance was gone.

Liverpool failed to clear though and the ball eventually fell at the feet of Ashley Westwood who blasted over the bar.

The visitors were slow to get going with full-back Alberto Moreno firing a curling volley too high from a narrow angle.

James Milner's steepling cross to back post fell nicely for Daniel Sturridge but he failed to trap it when he had space to get his shot in. 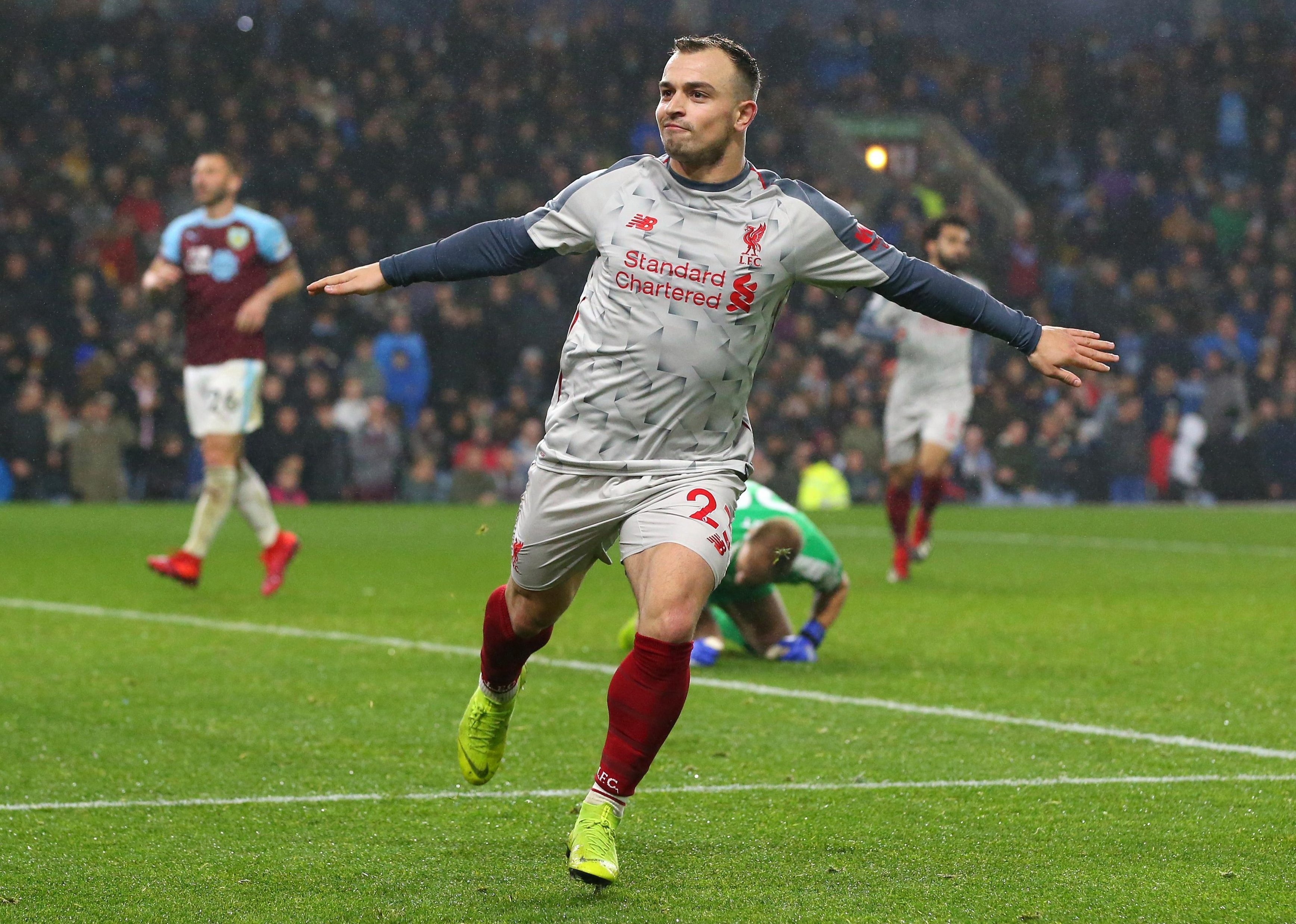 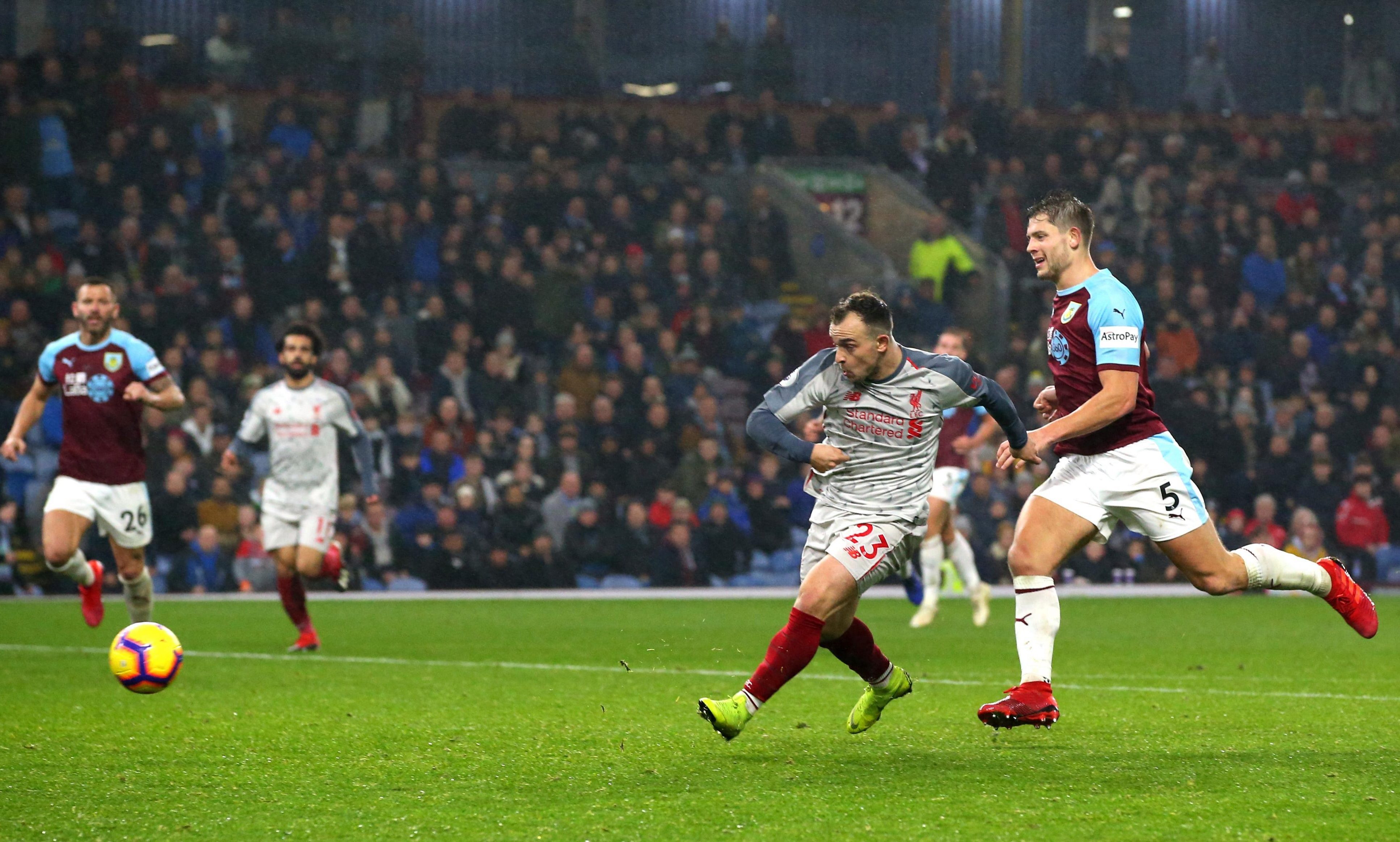 England defender Joe Gomez – one of the survivors from Sunday – didn't last much longer than 20 minutes.

He slid into the advertising boards after a challenge from Ben Mee and after lengthy treatment he could not carry on.

The new look Reds were struggling to find their feet in general after a day of torrential rain in this part of East Lancashire.

They did have one clear chance when a header from Virgil van Dijk from Milner's corner was straight at Joe Hart. 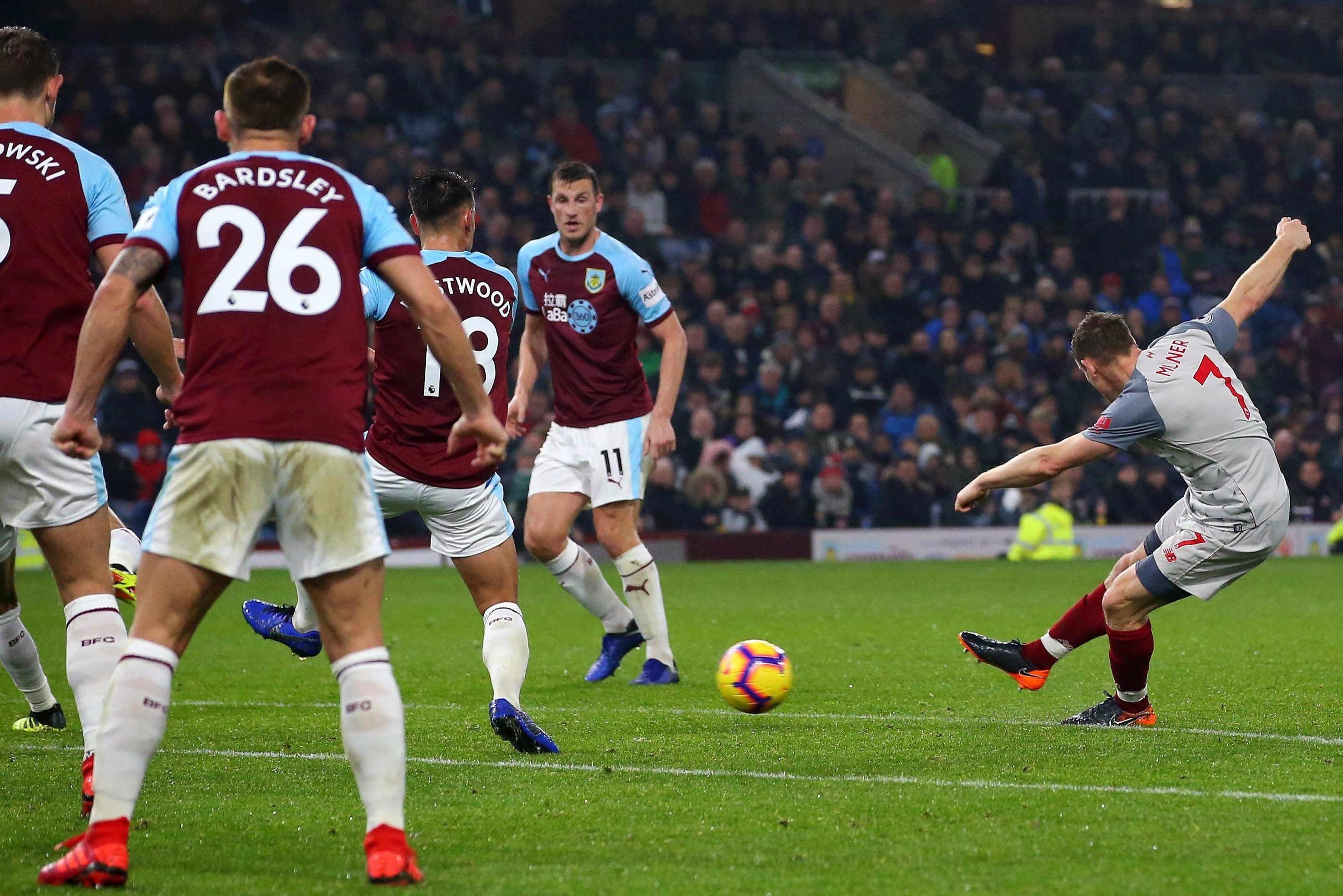 But the better chances came at the other end with Wood's long range effort taking a nick off a sliding Naby Keita which sent it looping just over the bar.

And from the resulting corner, Phil Bardsley let fly with a 35 yarder which had Alisson scrmabling but went narrowly wide.

The home side thought they had a lead which would not have flattered them just before the break when Ashley Barnes thumped home a Robbie Brady free-kick.

The linesman's flag cut the celebrations short – and he looked to have got it just about right. 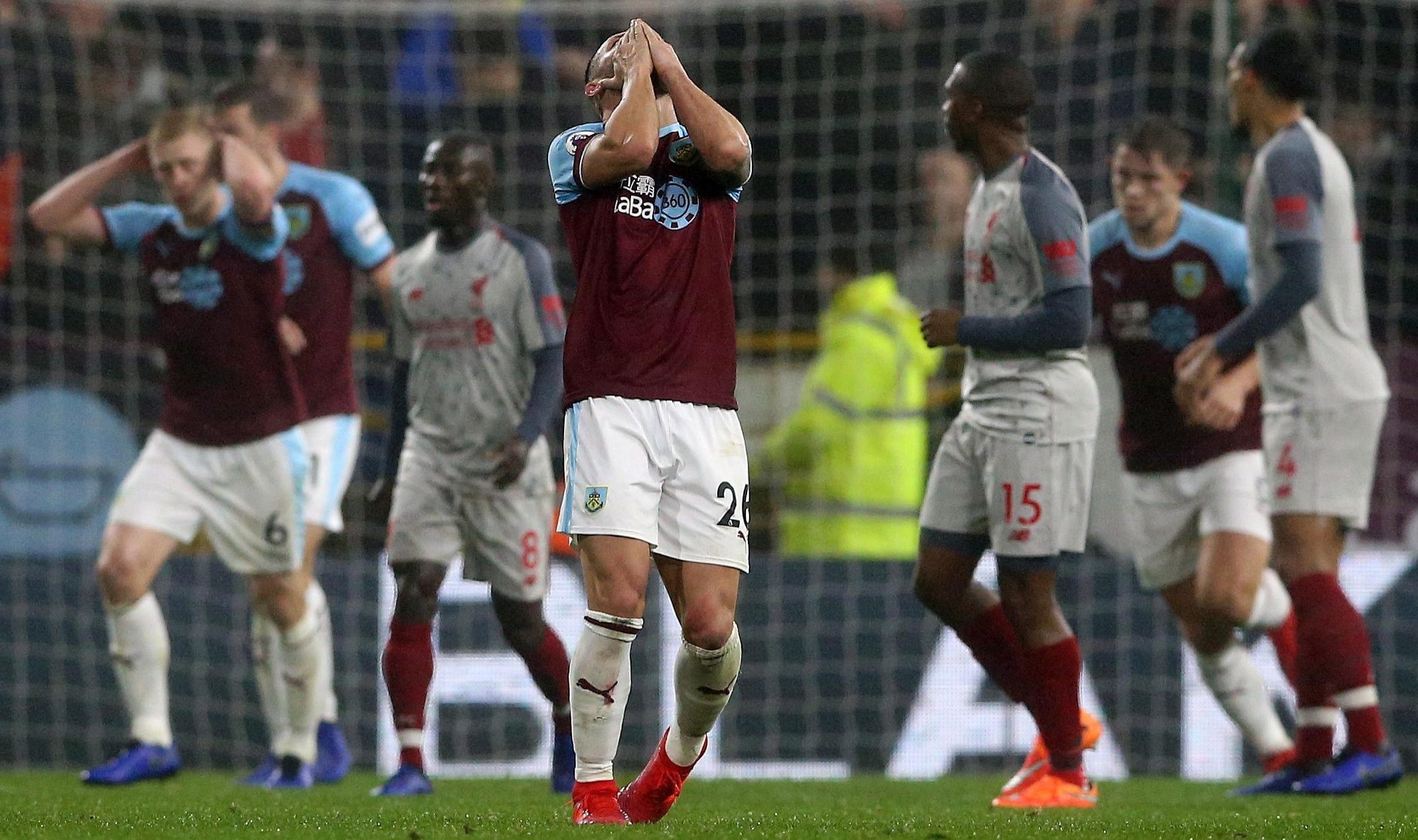 Klopp was fined by the FA this week for running onto the pitch to celebrate Origi's stoppage time winner against Everton.

There were times when he must have felt like doing the same – to get a reaction from his lacklustre players.

There seemed more purpose about the visitors after the break and they finally forced Hart into a meaningful save.

Sturridge got onto a clever back heel from Origi and curled a 20 yard shot which the former England number one tipped around the post. 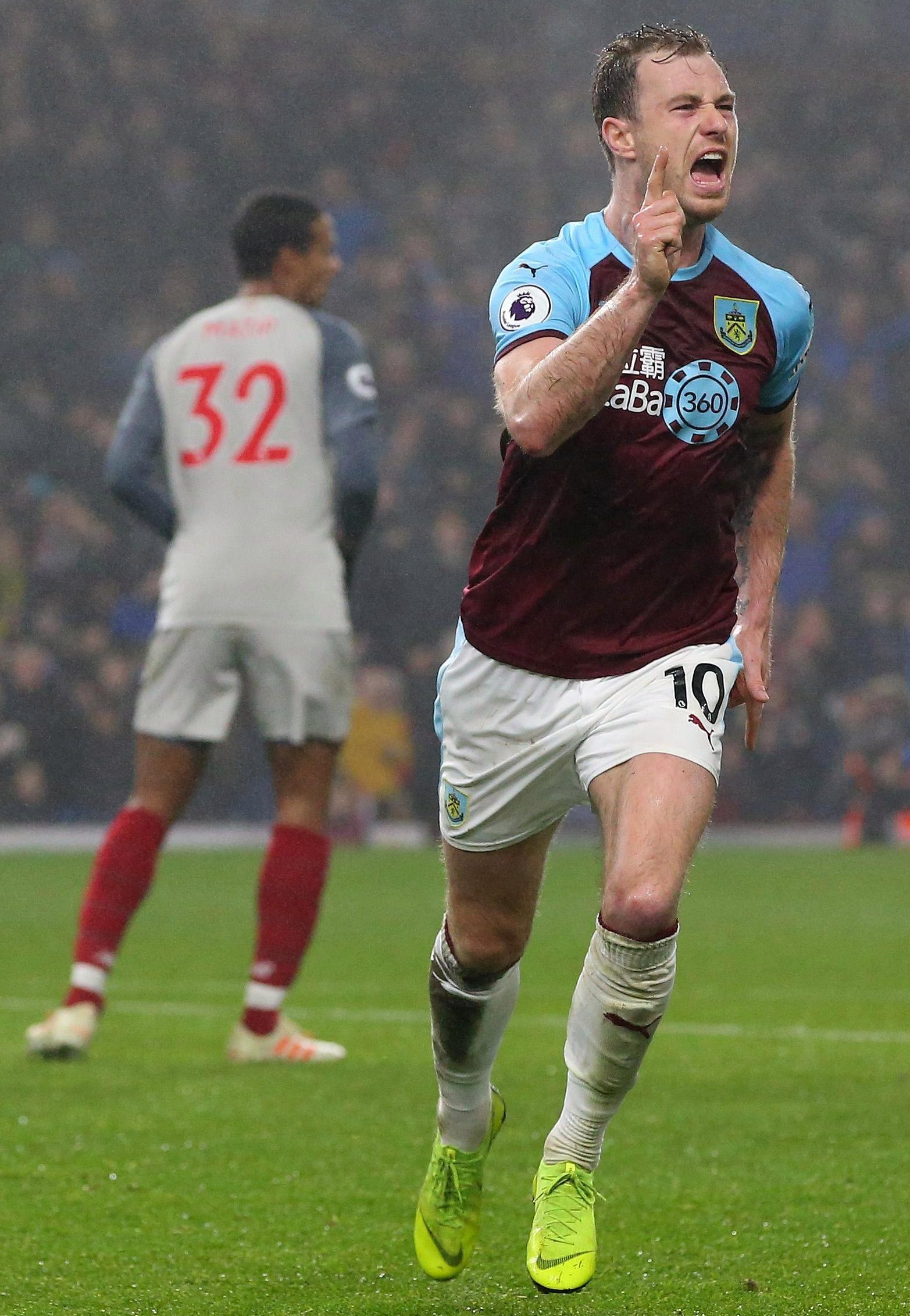 And a few minutes later Hart made an even better save to push Keita's pile driver onto the post.

The ex-Manchester City man was doing his old club no harm at all in their quest for back-to-back Premier League titles.

Those two saves looked when the Clarets took the lead with their next attack.

Charlie Taylor nodded a corner back into the danger zone, Wood could not connect and Barnes took a swipe just as Alisson was about to connect. 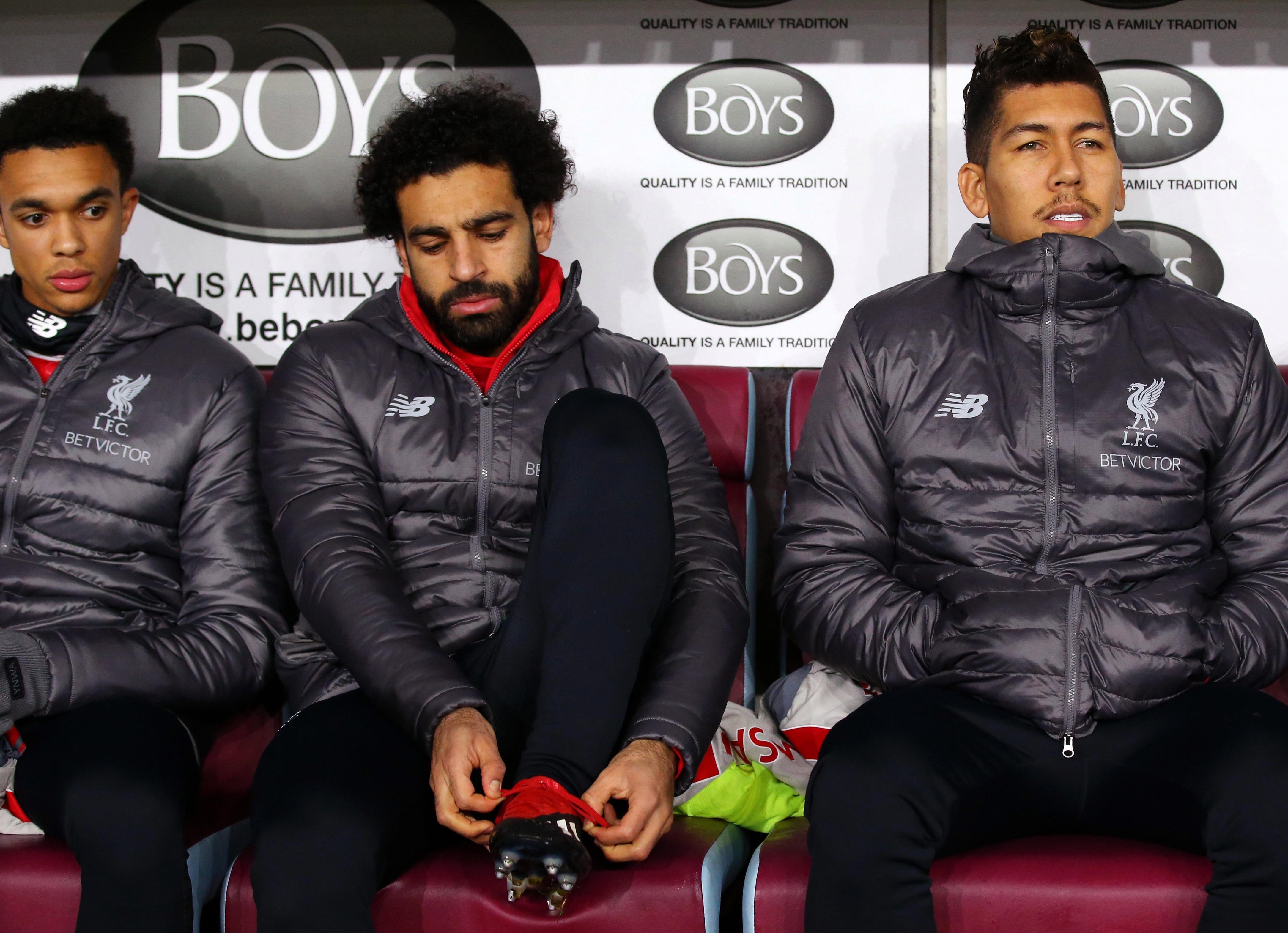 It broke to Cork who stabbed into the empty net- and ref Stuart Attwell waved away Liverpool's claims for a foul.

A big result at both ends of the table looked to be on the cards but the lead lasted just eight minutes.

Origi did well to lay the ball back to Milner in space and the midfielder rolled a shot into the corner from the edge of the box.

Hart and Milner were close pals during their days together at the Etihad – the Liverpool man would have enjoyed that one.

That was the cue for Klopp to send on the cavalry – with Salah and Firmino coming on to try to find the winner.

It paid off for him within a couple of minutes as the comeback was complete. 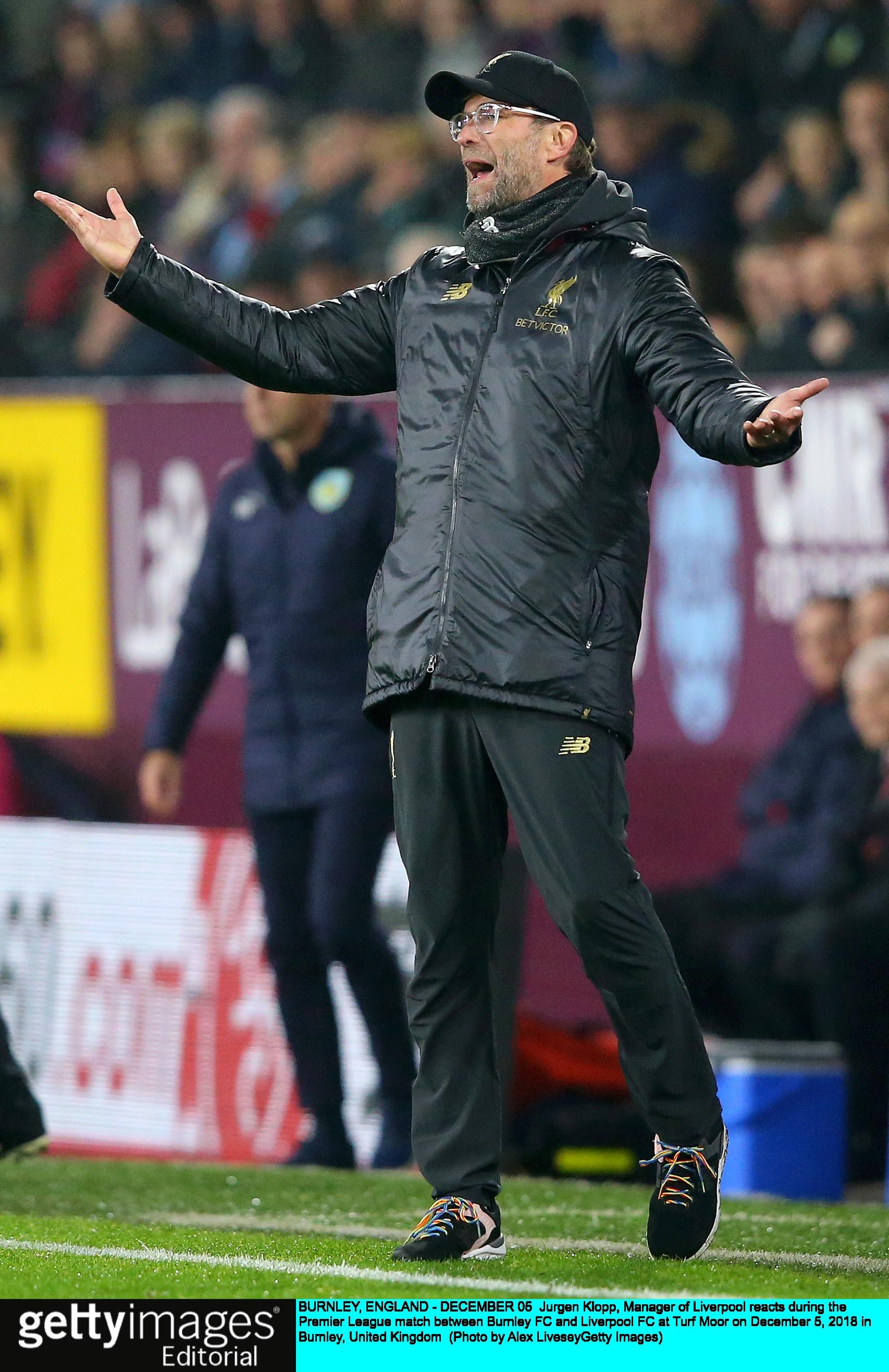 Trent Alexander Arnold clipped over a free-kick to the back post that was steered across goal by Van Dijk – and Firmino had a simple tap in.

It was the Brazilian's first touch – but what a vital one it could be in terms of the Premier League title race.

And it means the Reds now have their best ever start to a Premier League season. Considering all they achieved in the 70s and 80s that is some effort.