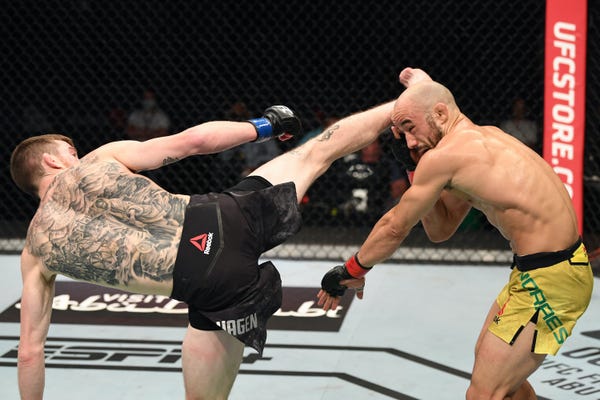 Cory Sandhagen scored a spinning wheel kick Saturday, hit Marlon Moraes with punches on the ground, and had to be dragged off of his opponent by the UFC referee Marc Goddard.

It was a stellar performance from the 28-year-old American, who rebounded from a brutal loss to Aljamain Sterling in June with a signature victory at the behind-closed-doors Flash Forum on Yas Island, Abu Dhabi.

Everything went right on the night for Sandhagen, who returned one of the greatest wins of his career at the UFC Fight Island 5 event, and was hailed by the renowned fight analyst Luke Thomas of Showtime.

"Cory Sandhagen is an animal," Thomas tweeted. "One of the smartest, most sophisticated fighters in all of the UFC."

"I think I hurt him with a couple of body shots," said Sandhagen after defeating Moraes, who was ranked as the No.1 bantamweight fighter other than champion Petr Yan.

"I kicked him in the head pretty good and I saw swelling right off the bat, which usually means an orbital break, so I was going to attack that side.

"I knew that he would be wary about the body shots, I know he heard my corner say something about that too, so I went to the head afterwards."

Sandhagen, who landed 46% of his 88 strikes through six minutes of fighting, was awarded a $50,000 performance bonus for the masterclass, and said he wants another bout against a top-ranked bantamweight before pursuing a title shot.