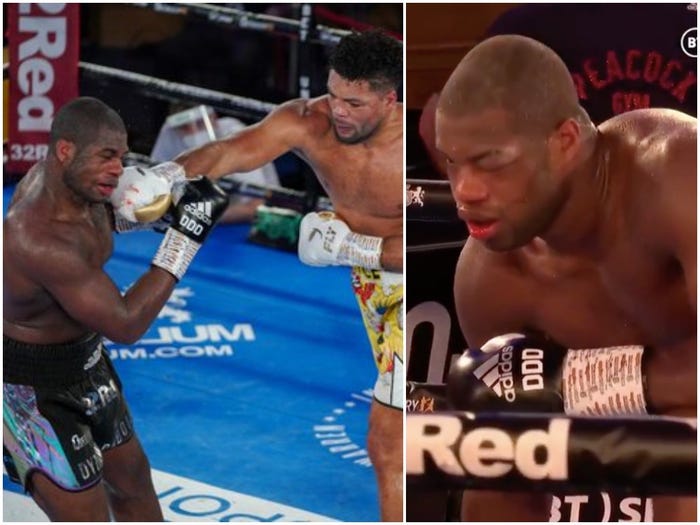 Daniel Dubois, 23, was sent to a hospital with a broken orbital bone after a heavyweight fight Saturday, nine months after making an insensitive joke about his opponent's mother, who is blind.

Dubois had been regarded as one of the most promising prospects in world boxing, and put his undefeated record on the line at a Queensberry Promotions show in London.

However, the London fighter, renowned for his punching prowess, was overwhelmed by unbeaten fellow Englishman Joe Joyce. After the victory, the 35-year old Joyce — who was an accomplished amateur — is on the cusp of a world title shot.

With a disciplined strategy, remarkable punch resistance, and a masterclass in jabbing, Joyce forced a grotesque bruise on his opponent's eye to swell shut through nine rounds of prizefighting at the Church House venue in London.

Then, one more jab to the face in the 10th round put Dubois down on the floor where he refused to get up, was counted out, and consequently lost the fight by knockout.

Joyce defeating Dubois in a way that jeopardized his opponent's vision is an ironic twist considering the youngster had earlier in the year made a tasteless joke about Joyce's mother Marvel — who is registered 93% blind.

The comment came at the end of a press conference to announce the April bout, which was then postponed because of the coronavirus pandemic, before getting finally rearranged for November 28.

Marvel asked Dubois whether he would pull out of the bout if he were ill, as the fighter had withdrawn from an amateur final years ago, citing illness.

"No, my dear," he said. "You know what, I'm gonna do you a favour. Because you can't see your son, after he's been knocked out, you will be spared the heartache."

While the comment get a response out of Joyce, Marvel later told the YouTube channel iFL TV that she thought it was "tongue-in-cheek," that Dubois is just young, in fight mode, and selling the fight.

It was a fight which, despite flashes of bruising Dubois punching, Joyce convincingly won because of the constant jabbing.

Dubois was taken to a local hospital and discovered he had suffered a broken orbital bone and nerve damage, as reported by Sarah Shephard at The Athletic.

With victory, Joyce advanced his pro boxing record 12 wins (11 knockouts), and will likely be thrust into big-money bouts against the likes of Dereck Chisora, Dillian Whyte, or Oleksandr Usyk.