The Seattle Storm won their fourth Women’s National Basketball Association title on Wednesday by thrashing the Las Vegas Aces 92-59 in game three to sweep the series.

The Aces held an early nine-point lead but that vanished quickly as finals MVP Breanna Stewart took control to score 26 points and Sue Bird, who won her first title 16 years ago, showed off her mastery of the no-look pass to dish out seven assists. 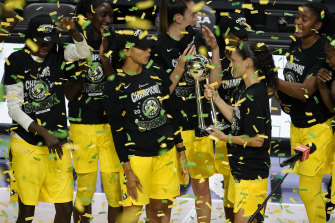 League MVP A’ja Wilson had 18 points and four assists in a losing effort for the Aces, who had 19 turnovers, including 11 in the first two quarters.

Melbourne Boomers centre Ezi Magbegor had two points, a rebound and an assist in seven minutes on court. Storm and Australian Opals guard Sami Whitcomb left the WNBA bubble late in September to return to Perth to be with her wife Kate for the birth of their first child. 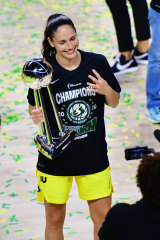 The best-of-five series marked the end of a season unlike any other in the WNBA, the league staging all games inside a quarantined campus in Bradenton, Florida, after the novel coronavirus outbreak forced weeks of delay.

‘‘Everybody bought in and we didn’t know what to expect from one day to the next,’’ said Stewart, who scored 85 points over three games. ‘‘We kind of rolled with the punches and continued to play our game.’’

The league dedicated its season to racial justice, with players protesting police brutality and violence against black Americans on the court and off it during the truncated 22-game season.

The championship was the fourth for 39-year-old Bird, who set a WNBA play-off record with 16 assists in game one of the finals after missing the 2019 season with a knee injury.

"To recreate it over time, and stay at a high level over time, is definitely something I'm proud of because it hasn't been easy," said Bird.

"I had surgery like May of 2019 and it's been a little over a year. This is the one time I'm not going to sugarcoat it. It's been hard."