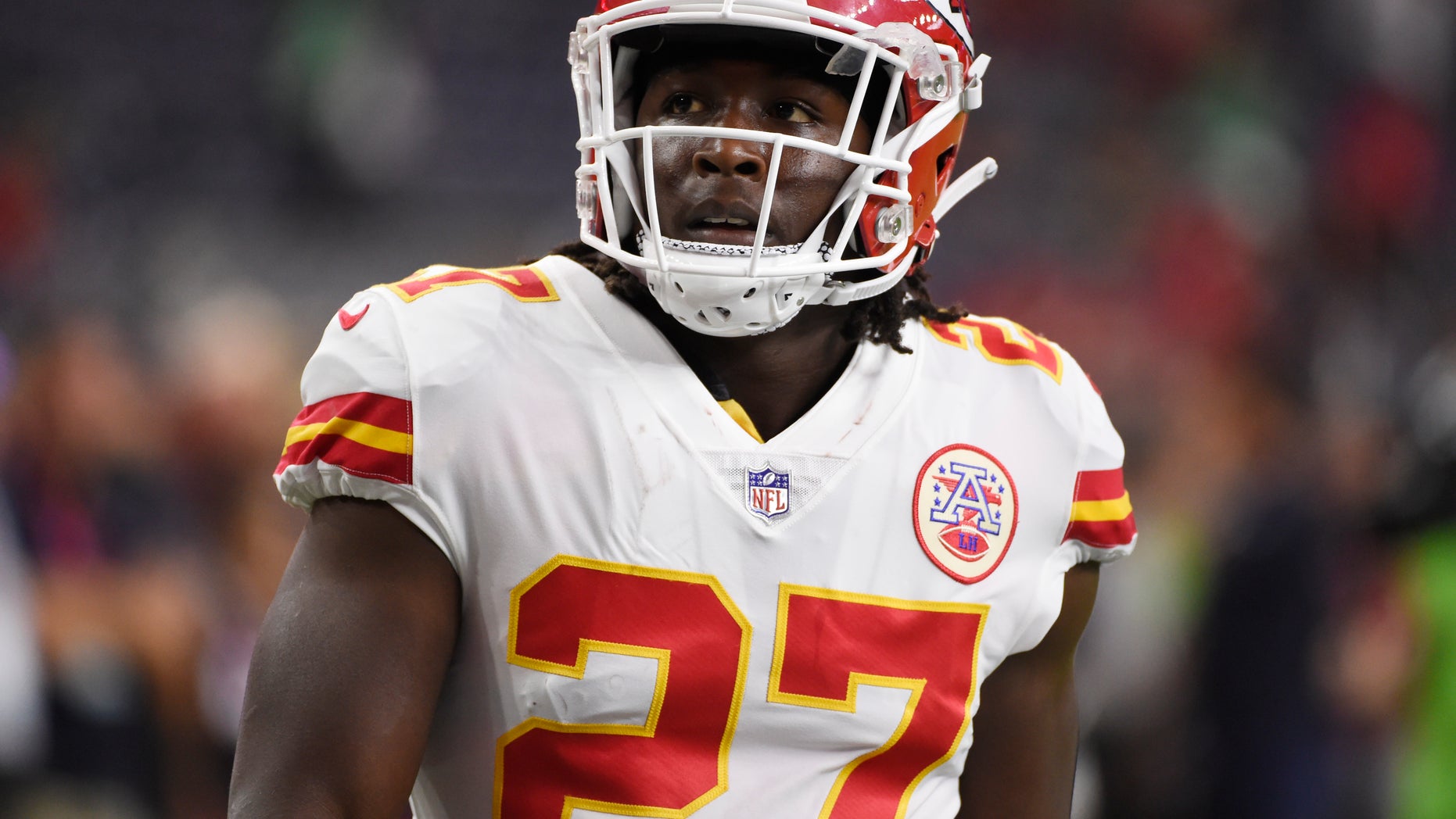 FILE – In this Oct. 8, 2017, file photo, Kansas City Chiefs running back Kareem Hunt warms up for the team’s NFL football game against the Houston Texans in Houston. The Chiefs released Hunt on Friday, Nov. 30, 2018, after video surfaced that showed the NFL’s reigning rushing champion knocking over and kicking a woman in a Cleveland hotel hallway in February. (AP Photo/Eric Christian Smith, File)

NFL running back Kareem Hunt acknowledged lying to the Kansas City Chiefs about his role in a February assault that ultimately led to his release from the team this week.

During a live interview with ESPN on Sunday, the league's reigning leading rusher also said that NFL officials never spoke to him about the incident while conducting their own investigation, and that he never saw the security camera video until TMZ Sports posted it Friday.

In the course of a few hours, Hunt went from preparing for Sunday's game in Oakland to being sent home from the practice facility. He was then placed on the NFL's Commissioner Exemption List, summoned back to the team facility and told that he was being released .

"They believed that I lied to them. I lied to them," Hunt said. "They pretty much said we love you, everybody cares about you, and just we have to let you go. It was a tough conversation. And the Chiefs did what was right. I made a poor decision and I'm willing to take full responsibility."

In the grainy, graphic video, Hunt is seen getting into an argument with a woman at a Cleveland hotel and several men step in to hold him back. He later pushes one of the men, knocking down a woman that Hunt admitted he did not know, and eventually kicks her while she lays on the ground.

The video brought immediate comparisons to the footage of former Ravens running back Ray Rice, who was seen punching out his then-fiancée in an elevator. That incident led to a lengthy legal saga, and it culminated in an investigation by Robert Mueller into the NFL's mishandling of it.

The league eventually hired more staff to conduct such investigations, and announced it would take a more active role in handling similar cases in the future.

The NFL made multiple attempts to obtain the video of Hunt, but the hotel said corporate policy only allowed footage to be given to law enforcement. The NFL then contacted Cleveland police, but the department said Saturday it did not pursue the video because it was not a felony-level case.

When asked whether the NFL spoke directly to Hunt about it, he replied: "No, they have not."

Hunt said he'd just purchased an apartment in the Cleveland hotel and had several friends over, and that he did not know the woman involved in the assault. Hunt said the argument came at the end of "a long night" and that "it was just a disagreement. I honestly wanted her just to leave."

Hunt pointed out that he was raised by his mother and grandmother, and said "they always taught me well. I know right from wrong and I'm a person that always wants to make everyone happy."

Still, Hunt has been in trouble before. He was suspended during his junior season at Toledo for a violation of team rules, and he was accused of a second, unrelated assault over the summer.

As in the case with the hotel incident, no charges were filed in that case.

"I regret the entire thing, everything," Hunt said. "I'm going to take the time to better myself, learn from this, get some help if needed, talk to people and really just take this really serious."

Hunt admitted that anger "could be an issue" and that he wants to get treatment, and Rice told NFL Network on Saturday that he would offer his help and experience in moving forward.

"I would definitely try to help him figure out, 'How can we start dealing with the underlying problems in your life?'" Rice said. "He has a long life to live, this will be a defining moment, but it shouldn't be the moment that defines you."

Hunt said he isn't sure that another NFL team will give him a chance, though adding a 23-year-old standout could be worth the public backlash for a team in need of help.

After leading the NFL in rushing last season, Hunt had already run for more than 800 yards while scoring 14 touchdowns in helping the Chiefs to a 9-2 record. He also had proven to be a popular player in the locker room, often attending sporting events and other functions with his teammates.

Of course, that was before the hotel security video surfaced.

Hunt remains on the exempt list, which means a team could sign him but he would be unable to play or attend games until the league's investigation is complete. The Redskins made a similar move — and accepted the public backlash — when they signed linebacker Reuben Foster, who had been cut by the 49ers after he was arrested on suspicion of domestic violence.

Foster also remains on the exempt list and the Redskins have acknowledged he may never play for them. But by signing him, they retain his rights should he make it back to the field.

"Everything is happening fast right now and I just want everybody to forgive me," Hunt said. "I know it's going to be hard. I made a bad choice. … I think I deserve it because if you really know me, and everybody that I'm really close to — I've had really close women who are friends — I'm so respectful to everyone. I made a bad decision at that time and I just hope that people forgive me."

The Associated Press contributed to this report