Tyson Fury will appeal to the World Boxing Council against the judges' decision to call his world title fight against Deontay Wilder a draw, believing he had won, despite being knocked to the canvas twice.

The Briton, his face marked and his hands sore after the battle, said: "I've never seen a worse decision in my life. I don't know what fight that judge who gave it 115-111 [to Wilder] was watching. That judge needs banning. He needs sacking or to go to Specsavers. Stuff like that gives boxing a bad name." 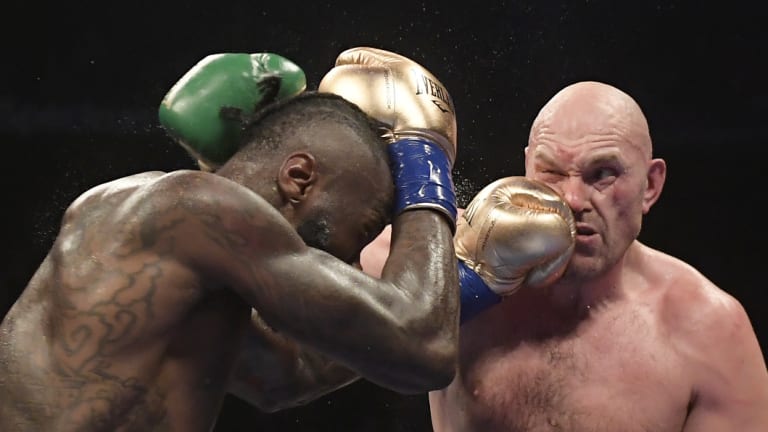 The other two judges scored the fight 114-112 in Fury's favour and 113-113, making it a split draw. The judging of Mexican-American Alejandro Rochin was called into question after his 115-111 scoreline, and the fact that he gave the first four rounds to defending champion Wilder.

Frank Warren, Fury's promoter, insisted that there would be an immediate appeal to Mauricio Sulaiman, the president of the World Boxing Council.

"We will be writing to the WBC, asking that they review this, look at what has gone on and order a rematch," he said. "Tyson's the No.1 heavyweight in the world, the people's champion, the winner of that fight.

"People I respect in boxing, Mike Tyson, Abel Sanchez, Gennady Golovkin, Teddy Atlas all had it for him [Fury]. People who can actually judge boxing know he was the winner, as do the fans.

"You travel [abroad] if you think it will be a level playing field. Things like that last night make you want to fight at home."

Fury added: "I haven't seen as bad a decision since the first Lennox Lewis and Evander Holyfield fight. The world knows who the real WBC champion is. Wilder has had a gift decision in his home country. He must be thanking his lucky stars that he still has the green and gold belt. That belt belongs to me."

Former heavyweight king Lewis agreed, saying: "It happened to me and I knew it was going to happen to him. Everybody could see who won." On getting up miraculously in the 12th round from a vicious right cross, left hook combination from Wilder, Fury said: "Getting off the canvas is what true champions do. You can't stop me getting up. I'm like a phoenix rising from the ashes.

"We want the rematch now. I did it for all the people following me, for people who have mental health issues."

"I did myself, my family and my country proud. I calmed the situation down, there could have been a riot there last night.

"Am I going to go AWOL again? It was nothing to do with the media last time, it was not because of the spotlight. I was depressed, even before the Wladimir Klitschko fight. It's different now, look at me, I'm well now. Boxing is one thing, but life is something different. Your health is your wealth."

The "Gypsy King," though, has made an incredible comeback.

"I want to thank my trainer, too," he said. "Everybody said Ben Davison can't do it – but Ben did a fantastic job. He gave me clear, calm instructions, even when I went down.

"I did what I had to do, but the media are the ones saying it was controversial. I take nothing away from Wilder, but this harms the sport. The world knows who the real WBC champion is. Even if I had stayed away from him for the final few rounds I probably would have still got the draw!"

Fury admitted he had no idea how he not only got back to his feet, but ended the fight on the front foot, with Wilder rocking.

He said: "I had to climb off the canvas twice, but that is what champions do. True champions get up. I could have stayed down, but while there is life in my body I will get up.

"I was just taking my time to recover. If you jump up too quick then sometimes your legs are gone. I took some time and my legs were perfect. It's easy to beat me, you just have to nail me to the canvas."