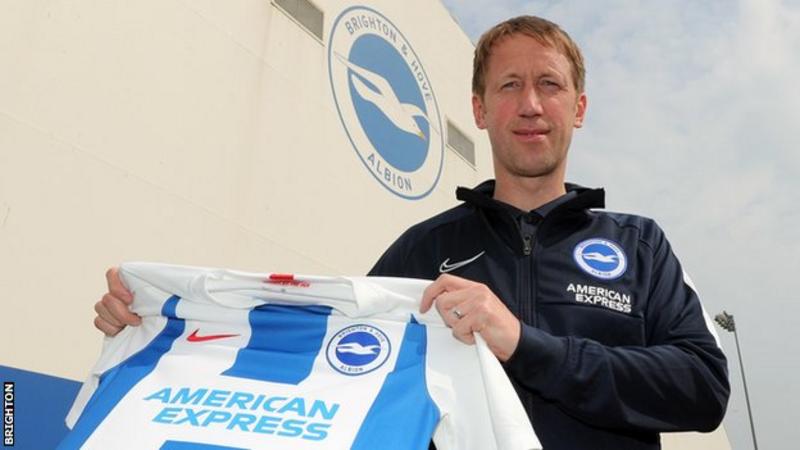 Brighton have appointed Graham Potter as their new manager on a four-year deal.

Potter, 44, leaves Championship side Swansea and replaces Chris Hughton, who was sacked last week after the Seagulls finished 17th in the Premier League.

Potter joined the Welsh side from Swedish side Ostersunds FK in June 2018 and guided them to a 10th-place finish.

“We believe that Graham is an excellent fit for our club,” said Brighton chairman Tony Bloom.

“We are delighted to have secured the services of one of the brightest young English coaches. Graham Potter has an excellent record of developing teams with an attractive playing style, fierce determination and a strong collective spirit.

“We are excited about our third successive season in the Premier League and we now wish to build on the solid foundations laid by Chris Hughton.”

Brighton have paid Swansea about £3m in compensation for Potter and his staff.

A former full-back in the Football League with Stoke, West Brom and York, Potter took his first managerial job at Ostersund in 2010, leading the club from the fourth tier of Swedish football to the first, winning the 2017 Swedish Cup and reaching the knockout stages of the Europa League.

Hughton, who took over at Brighton in December 2014, led them to the Premier League in 2017 and they finished 15th in their first season back in the top flight.

“The ideas and plans they have for the future of this football club excited me; I am thrilled and honoured to be a part of it.

“This club has been on an incredible journey and my aim, along with Bjorn, Kyle and Billy, is to ensure the great work that has gone before us is built on, as we strive to cement our place in the Premier League for many years to come.

Potter, who turned 44 on Monday, added: “I have had worse birthday presents, that is for sure. It is a fantastic opportunity, I am very excited and proud and I am aware of the responsibility I have.”

Potter was given permission to talk to Brighton after telling Swansea late on Friday that he wanted to leave.

The continuing financial uncertainty at the Championship club is thought to have been one of the key factors behind his decision.

“We received a request from Brighton last week to speak to Graham over the vacant managerial position at the club,” said Swansea chairman Trevor Birch.

“We had absolutely no desire to lose the services of Graham after the excellent work he had done over the course of his debut season. We therefore declined Brighton’s initial request to speak to him.

“We then spoke to Graham in length over the request. These discussions included the offer of a new, improved contract and certain assurances regarding future squad strengthening.

“These assurances would have had to sit within our current financial budget, but we were confident that by working together we could build on the excellent progress the team made last season.

“Unfortunately, following those amicable discussions, Graham expressed a desire to challenge himself in the Premier League and we reluctantly allowed him to speak to Brighton after agreeing a compensation package.”