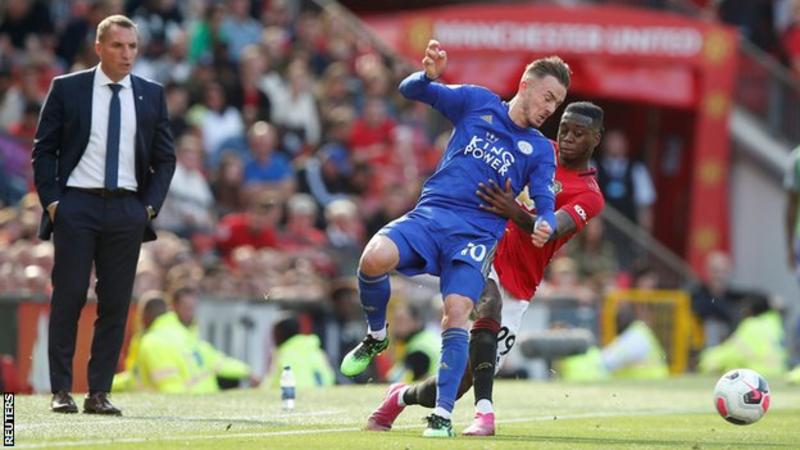 When the England squad was announced for last week’s internationals, James Maddison was one of the names on everyone’s lips.

As it transpired, the creative Leicester midfielder failed to play a single minute and must wait to make his Three Lions debut.

Five games into the Premier League season, the 22-year-old has been one of the form players in the top flight, so did he justify the calls for him to be an England starter in his biggest test of the season so far against Manchester United?

How did he do in the game?

If talk from the gossip column is to be believed, then this was an audition for Maddison for a big-money, January move to Old Trafford.

Leicester began the day third but a 1-0 defeat – courtesy of Marcus Rashford’s penalty – meant they lost their unbeaten start to the campaign.

But the Foxes may well have taken home all three points had Maddison taken the two chances that fell his way in the contest.

In the opening five minutes, the pacy midfielder sneaked in behind former team-mate Harry Maguire to latch onto Kasper Schmeichel’s long punt upfield and fired a low shot which David de Gea managed to push wide.

In the second half, Maddison stepped up for a free-kick on the edge of the box and although he shaped it well, it did not have enough bend on the strike, which flew inches wide of De Gea’s left-hand post.

He actually started out wide and only came into the middle when Hamza Choudhury was brought off for Ayoze Perez on 57 minutes, and it was this tweak which allowed the former Norwich youngster to play his natural game, finding pockets of space in between the defence and midfield and driving forward with the ball.

With time running out and frustrations growing, Maddison was booked in the second half for a late lunge on United midfielder Scott McTominay.

It capped a mixed afternoon for him – and Leicester’s young team as a whole.

“Leicester won’t have a better chance of going to Old Trafford and getting the points against that team,” former England captain Alan Shearer told BBC Radio 5 Live.

“They got into some good positions but their final ball was poor. Most of their players were poor in the final third.

“I think [talking about them being a young side] is giving them an excuse. I, and a lot of people, have been impressed with what Leicester have done this season. A few fancied them to get into the top six, and I understood why.

“That’s why I was looking forward to this game so much because I was thinking ‘come on then, let’s see what you’ve got Leicester’. But I was a little disappointed with them in the final third.”

Maddison’s attacking statistics and influence for his side in the final third this season are among the best in the division.

Since signing for Leicester at the start of 2018-19, no player has created more chances than Maddison’s 109, putting him at the top of the list above closest challengers Paul Pogba, Roberto Firmino and Kevin de Bruyne.

The ex-Coventry trainee also ranks in the top three for most shots (16) this season, most through balls (four) and has also provided two assists – the one for Jamie Vardy’s goal against Sheffield United was sublime, a defence-splitting pass with the outside of his boot.

His 41 crosses so far this term is second only to Liverpool’s Trent Alexander-Arnold and at Old Trafford Vardy almost nodded in at the back post from one of those dangerous balls into the box.

As well as his attacking prowess, Maddison also showed his growing maturity in the victory over Bournemouth with his defensive capabilities, winning the ball back eight times during the 90 minutes.

“There has been a lot of talk about him at the start of this season and you can see why. He has dropped into a deeper central role at the moment and just seems to be full of confidence.”

Maddison is also clearly well-liked by the supporters as they heartily clapped him whenever he trotted over towards them to take a corner.

But the one thing lacking from his repertoire is a goals return befitting a creative midfielder who wants to force his way into the national team.

Chelsea’s Mason Mount, preferred by Gareth Southgate when the England manager made changes in the Euro 2020 qualifiers against Bulgaria and Kosovo, scored again on Saturday. His goal in a 5-2 win against Wolves took his tally for the season to three, having scored 11 on loan at Derby in the Championship last season.

Maddison has not found the net in five league games this term – netting a deflected free-kick in the Carabao Cup against Newcastle. He scored seven times in 2018-19.

“In the second half we played well and it looked like it was coming but we couldn’t find that last pass,” said Foxes manager Brendan Rodgers.

“We didn’t connect the game through our midfield well enough to serve Jamie [Vardy]. He thrives on that but we were unable to make those passes. We started to get higher up the pitch after the break but nothing really dropped to him. It was a game of few chances for both sides.”

Maddison was part of the under-21 side that were humiliatingly knocked out at the group stage at the European Championship in the summer and that may still be lingering in Southgate’s mind.

There is a swagger and arrogance to his game, an observation perhaps not lost on Football Association technical chief Les Reed, who named no names but said the youngsters must guard against “over-confidence” following their poor performance at the Euros.

With another round of international fixtures taking place next month, Maddison may need to add some numbers to his goals tally to finally achieve his first cap.

On the other facets to his game, there is little more he can do.