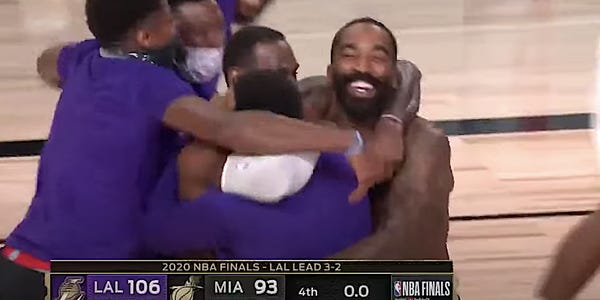 J.R. Smith celebrated the Los Angeles Lakers' championship the only way he knows how: without his shirt.

Smith, who went viral in 2016 for celebrating the Cleveland Cavaliers' championship without a shirt on, had his shirt off on the sidelines for the final moments of Game 6. ESPN analyst Jeff Van Gundy even remarked that Smith "already shirtless."

When the final buzzer sounded, Smith ran onto the court with his teammates and celebrated.

Smith broadcasted the Lakers celebration in the locker room on Instagram:

It's been a unique journey for Smith, who requested a trade from the Cavaliers in 2018, was sent home, then never traded. He was then bought-out of his contract, but didn't land with a team until the Lakers signed him for depth upon entering the bubble

Smith didn't play huge minutes in the postseason, averaging just 7.5 minutes per game across 10 games, but he is nonetheless a two-time champion.