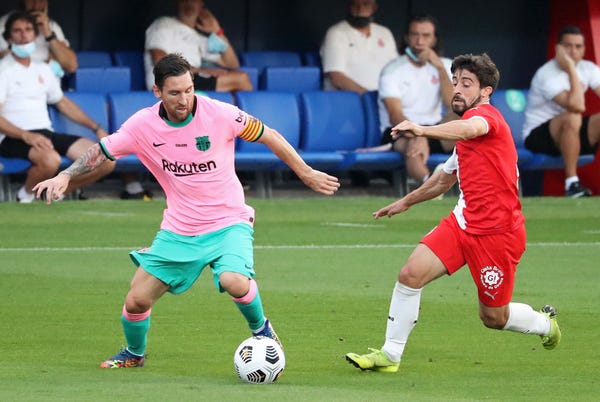 Lionel Messi scored twice and set up another with a beautiful disguised pass as Barcelona beat Girona 3-1 in a pre-season friendly on Tuesday.

The 33-year-old was playing in just his second game since unsuccessfully trying to leave the club by handing in a transfer request last month.

It took just 21 minutes for the Argentine to make his mark, playing new signing Francisco Trincao through on goal with an audacious reverse pass, who then teed up Philippe Coutinho for the opener.

Messi then made it 2-0 to Barcelona on the stroke of half time, firing the ball into the top corner from the edge of box with his right, and supposedly weaker, foot.

He added his second by way of a deflection in the 51st minute, before being substituted along with nine other players shortly after.

After the victory, head coach Ronald Koeman was full of praise for his attacking players and their ability to operate fluidly across the front.

"My opinion is to have the best attack we can put on the pitch and some players, they can occupy different positions," Koeman said after the Girona win.

"Messi can play the nine, the winger inside, and it's a good thing to have those kinds of possibilities."

Messi also featured in Barcelona's 3-1 friendly win over Gimnastic de Tarragona on Saturday, however striker Luis Suarez did not feature in either match, with the Uruguayan believed to be close to securing a move to Juventus, according to the BBC.

Lionel Messi turned up early and trained alone on his return to FC Barcelona, just 2 weeks after going on strike and demanding a transfer

Cristiano Ronaldo won't link up with Lionel Messi at Barcelona despite rumors flying, and will instead stay in Italy