DALLAS — Dirk Nowitzki has seen many things in his 21 seasons with the Dallas Mavericks. What he had never seen, until last month, was a fellow Maverick who could attract nearly two dozen autograph seekers in subzero temperatures to greet the team bus on a Thursday morning in Detroit.

Luka Doncic did just that in the 2 a.m. hour of Jan. 31, as the Mavericks pulled into a hotel adjacent to the world headquarters of General Motors, on the unglamorous end of a back-to-back set that began in New York.

It is likewise safe to presume that none of Nowitzki’s other 197 teammates over two decades in Dallas could have inspired what happened mere hours later. In a swift-moving blockbuster trade, Dallas acquired Kristaps Porzingis from the Knicks to serve as Doncic’s sidekick, with Mavericks General Manager Donnie Nelson openly admitting that he pushed for the deal because Doncic has “fast-forwarded a lot of our decision-making.”

These are the tales from just one day, albeit maybe the wildest day, of what Nowitzki frequently refers to as Lukamania.

“When we get to cities now, even late at night, there are so many people waiting with things for him to sign that it’s almost like we’re the Warriors,” Nowitzki said. “Lukamania is real. We’re living it every day.”

This week brings another milestone for Doncic, who celebrates his 20th birthday on Thursday. He is averaging 20.9 points, 7.2 rebounds and 5.7 assists through 56 games and is responsible for four of the five triple-doubles in N.B.A. history recorded by teenagers. It is a start that has quickly validated Nelson’s long-held belief that Doncic possessed superstar potential.

The only other rookie in league history to hit those levels over a full season was Oscar Robertson in 1960-61.

“I love, love, love guys that can pass the ball,” Nelson said, prioritizing Doncic’s ability to run a team at 6 feet 7 inches over the fact he is already known for having the league’s second-most-feared step-back jump shot, behind only James Harden’s.

“I knew I could play over here,” Doncic said, “but it’s better than I expected, for sure.” 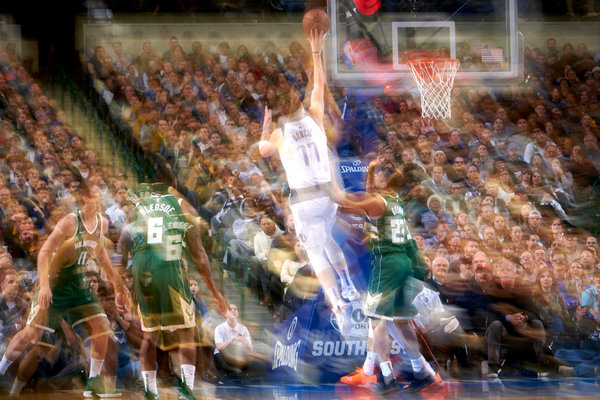 The gaudy numbers and worldwide interest in his exploits enabled Doncic to amass more than four million votes in N.B.A. All-Star balloting, trailing only LeBron James and Giannis Antetokounmpo. Doncic, in other words, finished higher in leaguewide balloting than Michael Jordan (fifth) did as a rookie. Higher, too, than James (13th) and even Yao Ming, who could manage only the fourth-highest total in 2003 despite the considerable voting might of Yao’s native China.

Doncic’s instant production has also validated every pundit who insisted, amid no shortage of skepticism, that concerns about Doncic’s athleticism and corresponding ability to deal with the length of N.B.A. defenders were folly given the rampant success he achieved both at the club (Real Madrid) and national team (Slovenia) levels as an 18-year-old. In the process, Doncic has unleashed a torrent of second-guessing upon the teams (Phoenix, Sacramento and Atlanta) that let him slip to the Mavericks.

Yet Doncic insists his maiden N.B.A. season, which appears destined to be christened with the league’s rookie of the year trophy, has not been as easy it looks.

The Mavericks, you see, were 26-34 entering Wednesday night’s home date with Indiana and likely to miss the playoffs for a third consecutive season. They have traded away all four of Doncic’s projected fellow starters (Dennis Smith Jr., DeAndre Jordan, Wes Matthews and Harrison Barnes) in deals that netted Porzingis and roughly $30 million in salary-cap space, neither of which can help the team this season.

It is the first time in Doncic’s life, since he took up basketball at age 7, that he has experienced losing. One hint of how well he’s coping with it: Doncic has pulled his jersey apart in frustration after a play gone awry — twice.

“He’s a winner — he won everything in Europe,” Juancho Hernangomez of the Denver Nuggets said. “So every time he loses, he gets so mad.”

Hernangomez has been observing Doncic from close range for years, both on the floor — since Doncic played alongside Hernangomez’s brother, Charlotte’s Willy Hernangomez, at Real Madrid — and through their shared WhatsApp chat room, which houses various European players fond of the popular video game Fortnite. But Mavericks officials are not worried about a scouting report from a friend that paints Doncic as a sore loser.

The One That (Nearly) Got Away

As recently as May 15, Mavericks executives were worried about Doncic — big time. Having known for more than a year that they wanted to draft him if they had the chance, team officials were crestfallen in Chicago when Dallas slipped from a projected No. 3 in that night’s draft lottery to No. 5.

“It was devastating for us,” Nelson said. “We thought our chance to get him was gone because it’s really hard to trade up in the lottery.”

Nowitzki betrayed a public hint of the organization’s disappointment when he tweeted this reaction: “Of course.”

To move up high enough, Dallas ultimately had to persuade the Atlanta Hawks to surrender the No. 3 overall pick. It cost Dallas both the No. 5 pick, which Atlanta used to take Trae Young, as well as the Mavericks’ top pick in the 2019 draft.

But the Dallas owner, Mark Cuban, blessed the deal, even at that price, because Nelson lobbied so hard for it. Five years earlier, during the 2013 draft, Nelson and his longtime international scout, Tony Ronzone, pushed for the Mavericks to use the No. 13 pick on a little-known Greek teenager named Giannis Antetokounmpo. Cuban wouldn’t allow it, given that Antetokounmpo, unlike Doncic, was mostly a mystery — and promptly regretted it as Antetokounmpo blossomed into a star in Milwaukee.

So this time, after the disappointment of the lottery, Cuban blessed Nelson to do whatever it took to land Doncic. What the team got was the son of a former Slovene pro — Sasa Doncic — and a veteran of three full seasons in the EuroLeague and Spain’s La Liga with Real Madrid after Luka Doncic made his pro debut at 16.

To the Mavericks’ delight, Doncic was more N.B.A.-ready than they ever dreamed — as his 16-for-29 shooting in the final three minutes of one-possession games this season would suggest. As Carlisle put it: “Unique background, unique skill set, unique body type.”

“I hesitate to throw out names like LeBron James and Magic Johnson, who have been do-everything kind of stars, but it’s pretty clear now that Luka has many of those same traits and has proven that he can do a lot of those things,” Carlisle said. “He has deceptive size, strength and quickness — and an understanding beyond his years on how to use his body to make plays and draw fouls.”

Carlisle is hardly alone in making such lofty comparisons. Miami’s Dwyane Wade, one of the league’s foremost James experts after their four seasons together with the Heat, has called Doncic’s passing “LeBron-like.”

Los Angeles Clippers Coach Doc Rivers said of Doncic: “He’s my favorite player to watch almost, and not talking just rookies. First of all, he plays with a great joy — I love that. And he’s just so advanced in the way he plays. The sky’s the limit for him. Wait until he gets in shape.”

Rivers was laughing when he tacked on that last line, but he did hit on a prime area of Year 1 concern with Doncic — conditioning.

The Mavericks and Doncic’s representatives, headed by the longtime N.B.A. agent Bill Duffy, agreed shortly after the draft to impose as much rest on Doncic as possible from July through September after a nonstop run at the highest levels of international basketball for nearly a year. Doncic thus began the season heavier than his listed weight of 218 and has absorbed jibes about his diet ever since.

But Mavericks officials are pleased with the gradual changes in Doncic’s dietary habits. At the team’s behest, Doncic hired a chef in December to prepare a number of meals for pregame and off-night consumption. Doncic has also begun working fresh juices into his routine.

In Madrid, Doncic lived for the past two and a half years with his mother, Mirjam Poterbin, who raised Doncic while running two beauty salons in Ljubljana. (Doncic has long declined to discuss his father.)

In Dallas, mom and son live separately near the American Airlines Center as Doncic grows into his independence, but still within walking distance.

“This was his dream,” Poterbin said. “At 7 years old he was already talking about N.B.A. I cry a lot of times.”

Yet there have been Year 1 challenges and disappointments for Doncic amid the Lukamania — and beyond the ever-present adjustment to playing for a team with scant postseason prospects.

He watched helplessly as his fellow Spanish-speaking teammate J.J. Barea suffered a season-ending Achilles’ tear in January. He lived through his first big trade, seeing Dallas abruptly abort its planned Doncic/Smith Jr. partnership when the chance arose to acquire his pal Porzingis.

“I was shocked,” Doncic said. “Europe doesn’t work like this.”

Doncic has also struggled at times with his free throws, converting just 72.6 percent this season despite proving so adept at getting to the line (6.4 times per game). Mom, meanwhile, admitted that Doncic was “quite sad at first” about missing out on an All-Star spot because of a format change in which fan balloting, as of last season, only accounts for 50 percent of the equation for determining starters.

The good news: These all rank as welcome tests — even the Mavericks’ sub-.500 record — compared to the early hurdles posed by the transition Doncic faced at 13. That was his tender age when Doncic left his mother back in Slovenia to enter the Real Madrid academy.

“There are no words to describe this, really,” Poterbin said. “Honestly I would not go through it again.”

“It was way harder,” Doncic said, “than coming from Madrid to here.”

Marc Stein is a sports reporter specializing in N.B.A. coverage, with occasional forays into soccer and tennis. He spent nearly 15 years at ESPN before coming to The Times. @TheSteinLine • Facebook