Manchester City extended their lead at the top of the Premier League to five points with a 2-1 win at Watford thanks to the magic of Riyad Mahrez on Tuesday.

The home side had kept City at bay for most of the first half but Ben Foster's goal was finally breached five minutes before the break when a cross from Algerian Mahrez was edged past the goalkeeper by the chest of Leroy Sane. 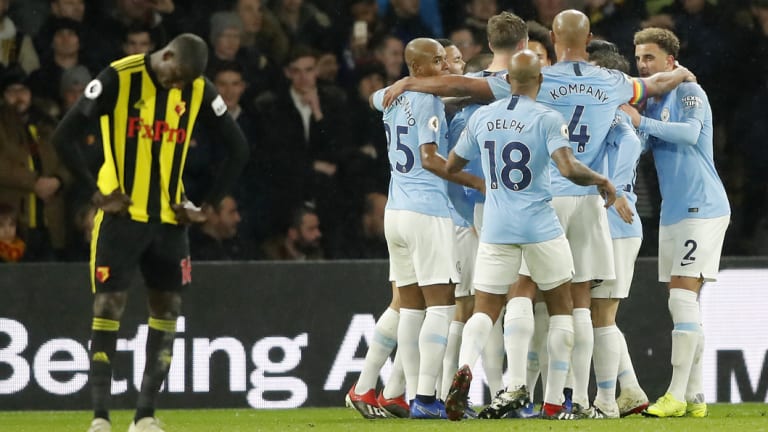 Bundle of joy: Leroy Sane is covered by his teammates after scoring for Manchester City.Credit:Frank Augstein

Mahrez scored himself shortly after half-time by firing in with his devastating left foot from the middle of the area.

City were easing to another victory when Abdoulaye Doucoure bundled the ball home after a goal-line scramble five minutes from time to give Pep Guardiola's side a nervy finish.

Watford, who have not won since October, pressed in vain for an equaliser as they suffered their third successive defeat.

City, still unbeaten in the league this season, lead the standings with 41 points ahead of Liverpool who visit Burnley on Wednesday looking to keep their own undefeated record intact.

Man-of-the-match Riyad Mahrez told BT Sport: "It was 2-1 at the end. They pushed but I think we handled the situation well and we go home with the three points.

"I think when it was 2-0 as well we had few chances to kill the game but we didn't."

Vincent Kompany said it was a good old Premier League game and were expecting long balls once they scored.

"They're a team that are extremely physical upfront and credit to us for staying strong and winning some key challenges in the end.

"I think Watford being at home [they] were becoming a bit more brave. It was a battle."

Cardiff City were left to rue a missed penalty before West Ham took charge and romped to a 3-1 win.

Lucas Perez, the summer signing from Arsenal, scored his first Premier League goals for the Hammers after finding the net twice as the Hammers recorded back- to-back top-flight wins for the first time in almost two years.

Cardiff, still without an away win this season, blew a golden chance to take the lead when Joe Ralls missed a first-half penalty.

And Perez punished them after the break with a quickfire double before Michail Antonio also opened his Premier League account for the season.

Bournemouth defeated Huddersfield Town 2-1 with Socceroo Aaron Mooy getting booked for his troubles in the defeat.

Huddersfield's defeat leaves the Terriers just one point above the relegation zone, having played one more game than relegation rivals Fulham, Burnley and Southampton who are all in action on Wednesday.

There was better luck for goalkeeper Mat Ryan though as his Brighton side defeated Crystal Palace 3-1, despite the Seagulls reduced to 10-men in the 28th minute when Shane Duffy received his marching orders.