In one respect, the status quo remained. Tom Phillips, one of the fittest players in the AFL, took out the Magpies’ two kilometre time trial. It is Phillips’ fourth pre-season with the Pies, and he has won the annual event four times. 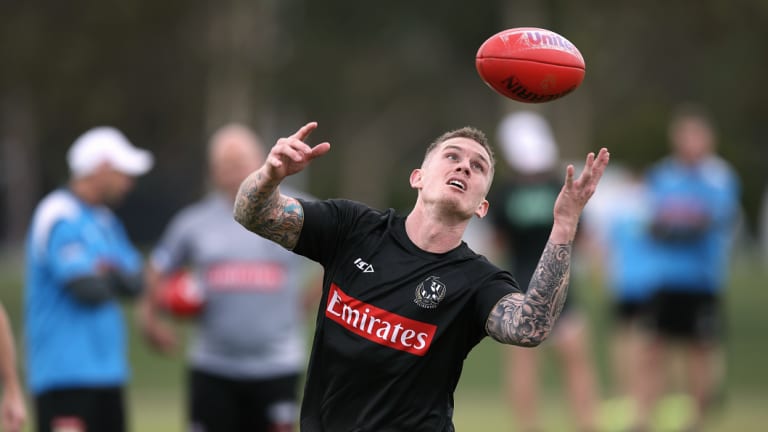 Old is new again: Dayne Beams was back at Collingwood training on Monday.Credit:Wayne Ludbey

That was the old. The new came in the form of Collingwood’s draftees, including Next Generation Academy graduate Isaac Quaynor, who finished in the chasing pack behind Phillips.

Dayne Beams was at once both new and old. The 2010 premiership Magpie trained having rejoined the Pies during October’s trade period after four years at the Brisbane Lions, which included a stint as captain.

Jamie Elliott and Darcy Moore were there too. The pair are back in town after heading to Germany to see acclaimed hamstring specialist Dr Hans-Wilhelm Mueller-Wohlfart in a bid to put an end to their respective injury woes.

Coach Nathan Buckley looked on, having interrupted his extended leave to temporarily return to the Holden Centre.

It wasn't quite a full cast though. Vice-captain and star midfielder Steele Sidebottom was an absentee after enduring a rotten weekend in which part of his house was burnt down. Sam Murray, delisted and then redrafted as a rookie, also remains in exile, provisionally suspended for an alleged drug offence.

It is barely two months since their heartbreaking grand final defeat, but according to Phillips, the Pies are feeling refreshed.

“It’s good to have the full squad. Everyone looks pretty revitalised and fresh. It’s looking pretty good," Phillips said on the club’s website.

“We’ve only got two weeks and then the three-week Christmas break and then we’re back into it on the flipside next year. I think everyone’s pretty fresh and ready to go in the next two weeks.

"It’s not like we’ve been back since the end of October. We’ve had a good break, everyone’s pretty fresh in the mind and in the body."