Matthew Dellavedova has been sitting patiently, watching his Milwaukee Bucks ride high in the NBA standings.

The Australian has played in only half of Milwaukee's games this season and is averaging a career-low seven minutes per game. 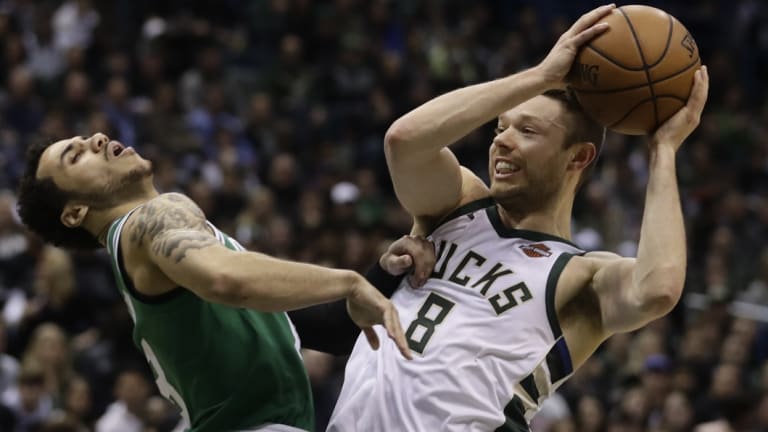 That's as the Bucks, who sit second in the Eastern Conference with a 15-7 record, are enjoying their best start to an NBA season since 1990.

Some would become frustrated but lack of playing time hasn't altered Dellavedova's team-first mindset or approach to his preparation.

"I am definitely staying involved; I know my opportunity is going to come and I will be ready when that comes," Dellavedova said.

In his third season with the Bucks, six-year NBA veteran Dellavedova has found ways to influence the emerging Milwaukee roster with vocal leadership in practice and encouragement during games.

Led by former Atlanta Hawks head coach Mike Budenholzer, the Bucks have elevated around MVP candidate Giannis Antetokounmpo thanks to an emphasis on pushing the tempo.

Milwaukee are playing at the fourth-quickest pace in the NBA and Budenholzer is prioritising the athletic guards at his disposal.

The quartet of Malcolm Brogdon, Pat Connaughton, Sterling Brown and Donte DiVincenzo – all of whom are younger than 28-year-old Dellavedova – have absorbed the majority of minutes at the Australian's position.

But Budenholzer says Dellavedova remains valued at the club.

"Delly's leadership and his voice in all kind of situations – practices, film sessions, timeouts – having Delly around is great," Budenholzer said.

"He's got a lot of great insight, he's been in deep play-off runs and on great teams; guys like that are invaluable."

A limited role isn't unfamiliar for Dellavedova, who despite helping the Cleveland claim an NBA Championship in 2016, saw his minutes fluctuate during the Cavaliers' march to the title.

Dellavedova cites his time in Cleveland, and the lessons learnt playing alongside LeBron James and a veteran-laden roster, as an example of how he can guide an inexperienced Bucks squad.

"I've been around people who have led really well without playing a lot," he said.

"James Jones was probably the best, with how much experience he had. He would say the tough things when they need to be said.

"You can still be effective being a leader even if you aren't playing as much."

Australian centre Thon Maker, who has now returned to the rotation and is averaging 12 minutes per game over Milwaukee's last nine contests, has been working hard behind the scenes, according to Dellavedova.

"[Maker] is just ready to go and he brings a great energy," Dellavedova said.

"He has been working a lot on his three-point shot and he has been a lot more vocal."

Budenholzer credits Maker for accepting his role and providing the Bucks with an added defensive presence.

"We keep talking about how he can impact the game defensively with blocking shots and rebounds," Budenholzer said.

"He has really embraced his role. He's a unique player and he has taken advantage of his opportunities."