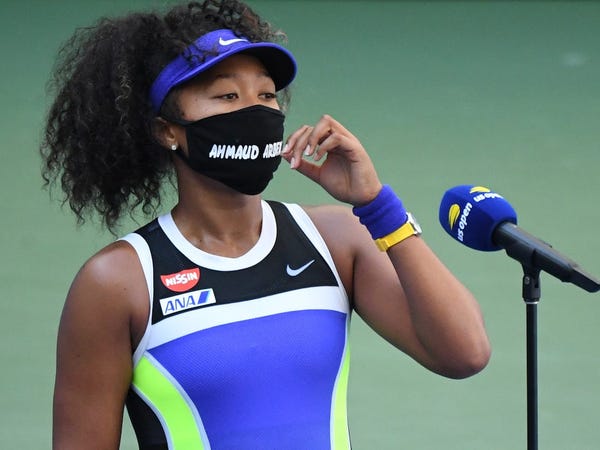 Naomi Osaka has been absolutely clinical on the court during her run through the 2020 US Open, but her off-court activism has taken an emotional toll.

The 22-year-old tennis superstar has kept the spotlight on police brutality and gun violence in the United States by wearing masks printed with the names of high-profile victims during each round of the New York-based major.

At 17 years old, Martin was shot and killed by self-proclaimed neighborhood watchman George Zimmerman while walking home from a local convenience store on February 26, 2012. Eight years later, Arbery — a 25 year old Black man — was hunted down by white vigilantes while he was jogging in his neighborhood in Glynn County, Georgia.

In short clips aired on Tuesday night's broadcast, the pair thanked the two-time Grand Slam champion for her commitment to bringing attention to their slain sons and the gun violence that continues to plague the country.

"I just want to say thank you to Naomi Osaka for representing Trayvon Martin on your customized mask," Fulton said. "We thank you from the bottom of our hearts. Continue to do well. Continue to kick butt at the US Open. Thank you."

"Naomi, I just want to tell you thank you for the support of my family," Arbery added. "And God bless you for what you're doing."

Osaka smiled and kept her composure while watching the clips and reacting on camera. She commended both Fulton and Arbery for their continued strength in the wake of their familial tragedies and told the interviewer that it "means a lot" to hear from them both.

"I feel like I'm a vessel at this point in order to spread awareness," Osaka said on the broadcast. "It's not gonna dull the pain, but hopefully I can help with anything that they need."

But in a tweet sent out later in the evening, Osaka said that she became extremely emotional once they stopped filming.

"I tried to hold it in on set but after watching these back I cried so much," she wrote.

The 2018 US Open champion — whose father is Haitian and mother is Japanese — echoed similar sentiments in her post-match press conference. She said she was "just trying really hard not to cry" while on camera and described Fulton's and Arbery's messages as "surreal" and "extremely touching."

"I feel like what I'm doing is nothing — it's a speck of what I could be doing," Osaka told reporters.

"It was really emotional. At first I was a bit in shock, but now that I'm here and I took the time I'm really grateful and I'm really humbled."

Osaka has said she will continue to wear the masks throughout the US Open. She'll return to Arthur Ashe Stadium Thursday to take on 28th seed Jennifer Brady for a trip to the final.