Roy O’Donovan is not bitter. Nor does he hold any grudges. Any self-pity is long gone. The Jets striker does, however, hope that in the future, ‘‘I will be treated with the same fairness as everyone else’’.

Mostly, he wants to move on. O’Donovan returns from a 10-match suspension – the second largest in A-League history – against the Central Coast in Gosford on Sunday. 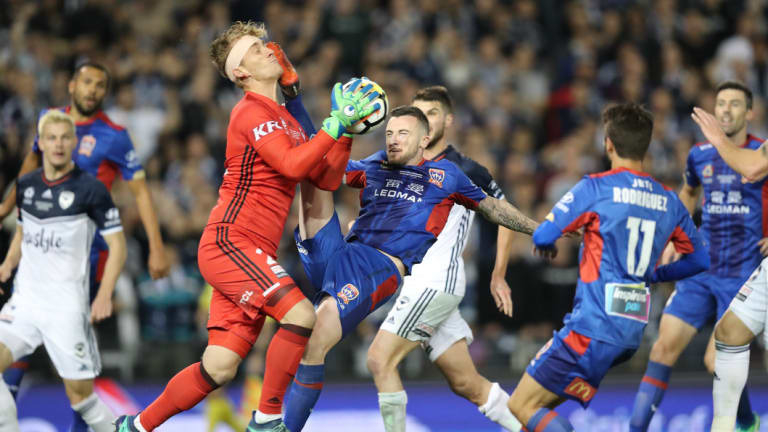 There have been moments, albeit fleeting, when the Irishman has regretted the high-foot challenge that connected with the cheek of Melbourne Victory goalkeeper Lawrence Thomas in the dying moments of the Jets’ controversial 1-0 grand final defeat last season.

“In hindsight, maybe, I wish I hadn’t gone for that ball,” O’Donovan told the Herald. “But that is probably not me to let a game fizzle out. Maybe, I have to be a bit more mindful now that there are consequences when I make a challenge and when somebody else makes a challenge.”

O'Donovan pleaded guilty in May to serious foul play, but insisted he was going for the ball when he collected Lawrence. In handing down the initial finding, Ethics and Disciplinary Committee chairman John Marshall SC said O'Donovan's ‘‘flying kick’’ was ‘‘the most dangerous play which has ever come before the committee’’. 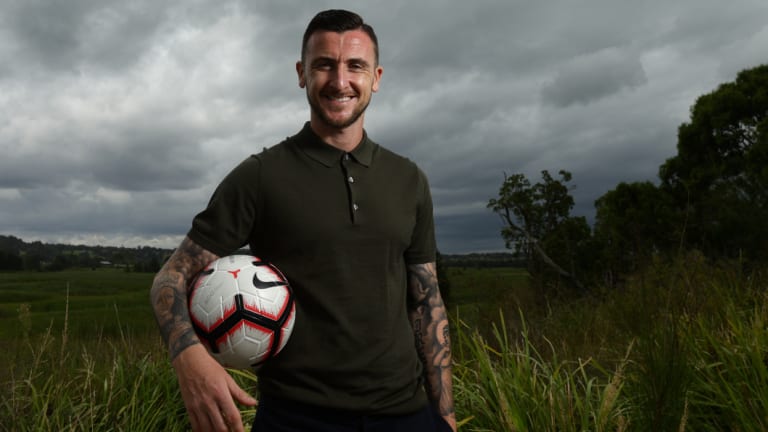 ‘All I want to do is play football, score goals and win games’: O’Donovan is raring to go.Credit:Jonathan Carroll

The Jets appealed unsuccessfully against the severity of the sentence after which the striker slammed the judicial process and labelled the way in which he had been depicted ‘‘hysterical and ridiculous’’.  Since then he has been counting the weeks – the minutes – until his return.

“It has obviously been a difficult one to take,” he said. “As poor as the outcome was, I never meant to do that. I couldn’t dream it up. It has gotten to the stage now where I am just looking forward to getting back on the pitch. And it’s not far away.

“It is important for me not to have any bitterness and hold any grudges. All I want to do is play football, score goals and win games. That has always been my drive in life since I was a young kid. That hasn’t changed.

“The lads here will tell you, I’m a good person, a good teammate and a good person to be around. The perception outside of this perimeter is maybe something different. I can’t change other people’s minds. I can only play my game and be who I am. I will continue doing that.”

A misfiring Jets outfit are certainly in need of O’Donovan’s energy and strike power. The 33-year-old scored nine goals in 15 appearance in his first season in Newcastle which was interrupted by a serious groin injury.

“I have trained hard,” he said. “I thought the best thing for me to do was to stay task orientated. There has been a little bit of feeling sorry for myself. Any sportsperson will tell you, you pick yourself up quick. Once the season started, I have got myself in the mindset that I have a set number of games, get myself fit and get my groin right from last year.

“I am a very motivated person. I have a lot of drive. That is why I try to keep up the young lads in that regard. That is what keeps you young, trying to compete. The club has been helping me get that extra bit of sharpness, extra bit of fitness so I am ready. I am feeling good.”

The fact O’Donovan’s return is against his former club, who he scored five goal in two games against last season, has added to the theatre.

“It’s great for the media, a great story, a great script,” O’Donovan said. “If it was against the Lambton Jaffas over in a dog park, it wouldn’t make a difference to me. I just want to be out there playing football. I want to move on. I’m sick of hearing about it, talking about it and having to live through it.

“The beauty of me coming back now is that I’m an experienced player and my game is built around instinct and scoring goals. You don’t lose that over the space of 10 weeks. I’ll be fine. At the end of the day, I’m all about playing football. I’m not here to pump myself up, I’m here to be a good player and a good teammate. My job is to score goals and hopefully that starts soon.”