There she was, fit and at the ground, but unavailable to help the Melbourne Renegades. The big-hitting opener had been denied permission to play in the opening round of the Women’s Big Bash League, with the England and Wales Cricket Board restricting WBBL clubs’ access to players who had been involved in World Twenty20 in the Caribbean, which finished less than a week before the Australian domestic competition started. 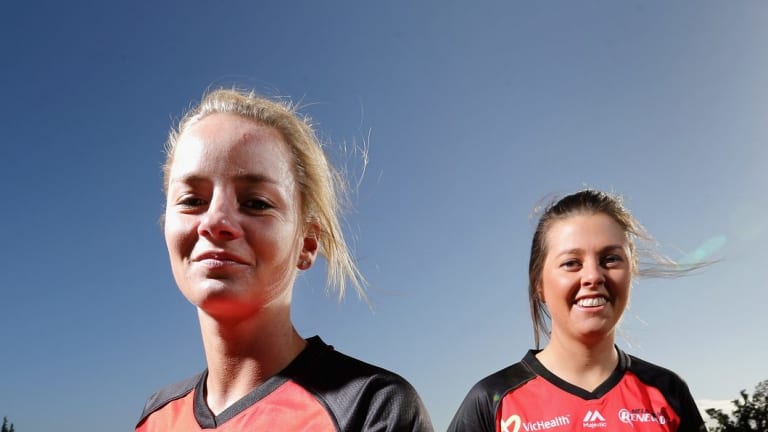 So Wyatt watched on as the Renegades mustered just 8-98 against Sydney Thunder at Junction Oval last Sunday, falling to a six-wicket defeat.

“Freezing cold in that dugout, watching us not do very well wasn’t very nice but that’s how it goes,” Wyatt said.

But after a week overcoming jet lag and acclimatising to the oppressive Melbourne heat, Wyatt is ready to be unleashed when the Renegades face the Adelaide Strikers in a pair of games this weekend, at the Junction on Saturday and in Ballarat on Sunday.

A destructive batter with two T20 international centuries to her name, Wyatt played for the Renegades across the first two WBBL seasons before missing last summer.

Back in town, she is keen to make an impact, and could also be called upon to bowl her handy off-spin.

“I’ve enjoyed a few training sessions with the girls, it’s great to be back with a few familiar faces, and I’ve got to know the new girls that I’d not met before. There’s a really nice vibe around the squad at the minute which is good. Obviously we were disappointed with last weekend’s result, so hopefully we can forget that and put things right tomorrow, and get our season up and running with a win.”

Wyatt, 27, acknowledged she would carry plenty of responsibility to help a Renegades’ top six that has struggled to make enough runs.

“T20 is my format. I’ve done well, especially in the last 15 months or so. So I’ve confidence in that, and hopefully I can go out there and score some more runs, and help contribute to a win.”

The Renegades will have their hands full against the Strikers, who were first-start winners against Brisbane Heat.

“They’re a great squad, they’ve got a great bowling attack, but we’ve had some success against Adelaide in the past, so we’re very confident that we can go out there and give them a good game, and hopefully get two wins under our belt.”

The Melbourne Stars are meanwhile set for a weekend at Burnie. The Stars are in action in the Tasmanian port city for a pair of matches against the Hobart Hurricanes, and have named an unchanged squad after their upset win against the Sydney Sixers to start the season.