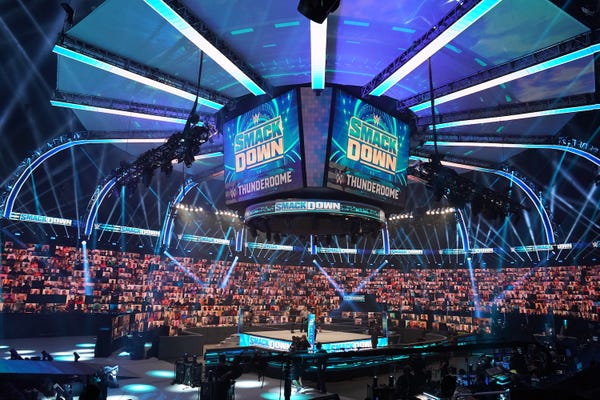 Sports entertainment traditionally works best when it feeds off of a live audience reacting to the chaotic energy unfolding in and around the ring.

When the coronavirus pandemic forced a pause to live events with crowds, WWE moved away from big, fan-filled arenas and into the firm's Performance Center in Orlando, Florida to host events behind closed doors.

As the move happened, there were stressful meetings taking place at a board-room level as the world's leading professional wrestling firm tried to figure out how to navigate the worldwide health crisis.

Stephanie McMahon, WWE's chief brand officer and daughter of CEO Vince McMahon, told Insider last week that it was "tense" because multiple cities around the world had already locked down by mid-March, which was just weeks before WrestleMania — the flagship WWE event of the year.

WrestleMania 36 was supposed to take place live on April 5 in front of 80,000 people at the Raymond James Stadium in Tampa, Florida.

Instead the show was broadcast on a tape delay over two days — April 4 and April 5 — and included imaginatively devised and named matches.

The spectacle included "The Boneyard," where the seemingly immortal Undertaker defeated AJ Styles by kicking him into a grave, getting into a tractor, and pouring a load of dirt over his body to bury him alive.

The whole scene was like a Hollywood horror film shot at a grimly-lit cemetery location.

USA Today called it "a masterpiece."

The weeks leading up to WrestleMania were 'tense'

McMahon can laugh about it now, but looking back she said the weeks that led up to the marquee event were stressful.

"First and foremost, we had to take into account the safety of our fans and of our superstars and employees — that's paramount," McMahon said.

"Working with the local government offices in Florida, the CDC, and the World Health Organization, we made sure we were aligned with all the recommendations from the organizations to do the right thing."

WWE executives raised questions over how the company could continue to fulfill its business plan while guaranteeing the safety of its fans, talent, and employees.

"There were a lot of scenarios being planned all at the same time," McMahon said.

Internal discussions were taking place to decide whether they could even go ahead with WrestleMania — WWE's Superbowl — let alone pull off a spectacular show in the middle of a pandemic.

"We had to quickly pivot to decide — A) does the show still go on? and B) if so, where and how?

"We decided that yes we have responsibility to our audience, and to our partners, to continue to produce our programming.

"We wanted to provide an opportunity for our viewers to escape. We still do. It's our mission to put smiles on peoples faces.

"WrestleMania took place at our Performance Center over two nights in front of absolutely no people, and it was definitely a unique experience."

The WWE ushered fans back into the arena through virtual reality

In April, WWE was back producing live broadcasts in behind-closed-doors venues. This was helped by Ron DeSantis, the Florida governor, deeming sports an essential business critical to the state's economy.

With it becoming increasingly apparent that mass gatherings were not happening any time soon, the WWE wanted to find a way of bringing its fans into an arena through virtual reality.

"It starts with the WWE vision with what they want to create, and give them the credit here for having the vision," Jon Slusser, owner and partner at The Famous Group, told Insider.

"They were willing to take this concept of having virtual fans to a place nobody had ever seen before," he said.

"They called us, said, 'Hey, we want to work with you guys on this idea of building a low-latency massive experience for our fans.'

"And they wanted that experience to be authentic, real, and for the reactions to be as quick as possible. So we worked to create that environment as soon as possible."

The virtual fan experience would be one part of what would become WWE's ThunderDome, a multi-tech, state-of-the-art, behind-closed-doors production inside Orlando's Amway Center.

The 20,000 capacity venue is normally the home of the NBA team Orlando Magic, but with the team playing in the league's bubble across town at Walt Disney World, WWE took over.

It includes pyrotechnics, lasers, and drone cameras. And, crucially, video boards which feature fans who can enter the arena virtually and react in real time to the chaotic energy taking place at each and every event during the pandemic.

Stephanie McMahon's mission to oversee the return an audience inside an arena, reacting to the WWE's superstars, had arrived.

It has proven so popular there are already 130,000 people on the waiting list.

"The ThunderDome is not one piece of technology … it's many different departments that the WWE has put together to create this energy, experience, and environment, from a broadcast [point-of-view] and the fans coming in virtually," said Slusser.

"We work with the WWE on one aspect — the virtual fans."

Slusser said that whenever the WWE uses its drone camera technology, incorporating a wide angle view, one can see the entire audience which consists of thousands of fans watching live at home who might be screaming, cheering, or booing, depending on what is happening at the event.

"Those moments give me chills because nobody has ever done anything to that scale before," he said. "It's mind-blowing when you see it all put together with all those people, those live faces.

"The crowd gets so intense, so emotional about these moments, and you could feel it, see it, and see them reacting to it.

"The wrestlers play off it, too," he said. "Those moments when you can feel the emotion of the crowd … those are my favourite moments."

The Famous Group has been working on mixed reality and virtual technologies for years, but put together a rapid bespoke solution for the WWE, ready to launch within months of sports shutting down.

"This technology is the culmination of years of developing different technologies for live events," Slusser said.

"We didn't have this solution, but we had components of this solution. We had worked with real-time rendering before on a variety of different projects, mixed reality using the Unreal Engine, and we've used AWS for our projects, which we've used for this.

"Quince Imaging and Frozen Mountain are our two technology partners, and so we had all of the pieces in place.

"But when COVID struck we had to put those pieces together very quickly using our knowledge of the market, our 20 years of being in the sports business, understanding the live event, and calling our friends in the leagues and saying, 'This is what we can provide.'

"Although it came together quickly, it's because we built all these other technologies either separately or somewhat together, then put them together in that moment, to create this spectacle for the WWE."

The end result, which completed the ThunderDome experience, blew McMahon away.

"We were hoping to be back in arenas by now with fans in attendance but obviously that just wasn't meant to be," McMahon told us.

"All along we were really learning, playing with audio, different types of graphics packages — all different things.

"Then we realized we're not going to be in different arenas and starting to travel again, so what are we going to do, and how can we create the best experience for our fans."

The WWE saw what the NBA was doing with virtual fans and wanted to build on that, McMahon said.

"We have up to 1,000 fans surrounding the ring all giving us their real, visceral reactions. Having no people in the arena allows us to play with things like lasers and pyro in places we never could before because we had human beings sitting there and you had to be careful, obviously!

"So it really opens us up to doing all kinds of things. The screens with people on can change, we can programme them to be a part of someone's entrance, or be a part of an effect during the show for one of our characters.

"That, combined with the virtual reality and everything else has really brought back that energy that we were missing."

'It looks like the future because it is the future'

A ThunderDome-esque experience could feasibly compliment the tradition fan experience on a post-pandemic planet, McMahon said, telling Insider that "anything is possible."

"We really do want to create the best possible experience for our fans. One that's worthy of their passion so we're examining all kinds of things and you could see both.

"I think we're going to see a lot in all businesses and in particular the entertainment industries and sports, a lot of combinations of the new learnings from all this technology, plus the fundamental foundational learning that we have to move our businesses forward. So it'll be an intersection of what works best."

Slusser believes it has birthed a new industry.

"I don't think this is just a new platform," he said. "I believe you can monetize a virtual experience that leagues, teams, and promoters can sell tickets for globally, for a local event.

"There are super fans for every franchise out there, who would love to be at the game or event, but they can't be," Slusser said.

"And if they have the ability to be close to the game, rather than just watching it on television, they'll sign up to it all the time. As a result, this is a new business model.

"You can bring in fans who can get a unique experience either through exclusive camera angles or extra content. Plus, the most important thing, is that they feel like they're in the building.

"Their presence is with the players, or the artist. That is unbelievably powerful. I know leagues, teams, promoters, are going to see an opportunity to increase revenue and expand their global audience with this platform. This is absolutely going to happen, going forward.

"It looks like the future because it is the future."