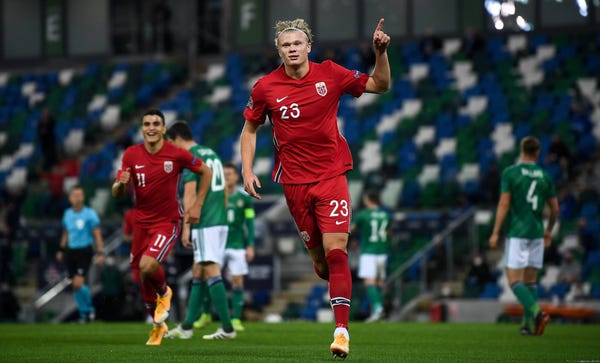 A flying start to the game saw Norway go 1-0 up within just two minutes through Mohamed Elyounoussi's controlled volley, before Paddy McNair equalized for the home side with six minutes played.

Less than a minute after McNair's strike however, Haaland, 20, thundered home a superb volley from outside the box to make it 2-1 and open his account for the night.

A brace from Alexander Sorloth either side of half time – the latter which was teed up beautifully by Haaland – then made it 4-1, before Haaland again struck to complete the scoring, curling home another wonderful effort from the edge of the 18 yard box.

Before the match, Norway coach Lars Lagerback said Haaland has the potential to be as good as Messi and Ronaldo in the future.

"I've maybe been around too long but I have never seen a guy since maybe [Lionel] Messi or [Cristiano] Ronaldo that developed at such a young age," Lagerback said, according to Sky Sports. "That's very unique and he has all the possibilities to become a really world class player."

After Haaland's performance at Windsor Park, Lagerback added Sweden legends Henrik Larsson and Zlatan Ibrahimovic to the list of players the Borussia Dortmund striker reminds him of.

"I don't mean to compare him with players, but he is a little bit of a mix of players I had before like Henrik Larsson and Zlatan Ibrahimovic," said Lagerback, who was the head coach of Sweden between 2000 and 2009.

"Zlatan was the same, he always wanted to go for it and score goals. Henrik was a bit more of a team player and moving a lot.

"He's a little bit of a combination. He has the gift and the mentality. If we keep his feet on the ground he can reach really high."

When asked about the comparison's made by Lagerback, Haaland said: "Woah, that's some huge words. I appreciate these words.

"First of all I want to try to get as best as I can, to work hard every day, to try to enjoy my life as much as possible. You saw tonight I enjoyed the game. That's why I play football."

Haaland scored 28 goals for Austrian side RB Salzburg during the first half of last season, earning himself a move to Borussia Dortmund, where he hit a further 16 in just 18 matches.

He scored his first ever senior for Norway during a 2-1 defeat to Austria on September 4.