It was a decade ago Tuesday, in a different National League division series opener, that the October value of Travis d’Arnaud started to reveal itself.

Now 31, d’Arnaud is the catcher for the Atlanta Braves, the cleanup hitter in a thunderous lineup that rolled past the Miami Marlins, 9-5, on Tuesday in Houston. Back then he had not yet played above Class A, but he had already been traded for a future Hall of Famer. On Oct. 6, 2010, that player — Roy Halladay — spun a no-hitter for the Philadelphia Phillies in his playoff debut.

The Phillies, who sent d’Arnaud and two other prospects to the Toronto Blue Jays, would happily make the trade again to get a pitcher like Halladay. But they never stopped pining for d’Arnaud.

“I remember I didn’t want to trade him,” said Ruben Amaro Jr., then the Phillies’ general manager. “And I went to Alex begging to get him back.”

Alex Anthopoulos, then the Blue Jays’ general manager, instead wound up sending d’Arnaud to the Mets in December 2012, in a package for pitcher R.A. Dickey — the second time d’Arnaud was dealt for a Cy Young Award winner. Last November, as general manager of the Braves, Anthopoulos got d’Arnaud back with a two-year, $16 million contract in free agency.

“This is what I had in mind — championship-caliber team, championship-caliber organization,” d’Arnaud said on Tuesday, after going 3 for 3 with a go-ahead three-run homer to help the Braves to a 1-0 lead in their division series. “This is what I was thinking about all off-season, to play in the playoffs again and have an opportunity to win a ring. And over here, I like our chances.”

The Braves won their third N.L. East title in a row this season with an offense that averaged nearly six runs per game. Freddie Freeman, Ronald Acuna Jr. and Marcell Ozuna are the headliners, but d’Arnaud led all major league catchers (minimum 40 games) in batting average, at .321, and on-base plus slugging, at .919.

In Game 1, he walked, doubled and singled before his homer off Yimi Garcia broke a 4-4 tie in the seventh. It went to straightaway center, roughly the same spot where d’Arnaud bruised the Mets’ home run apple during the 2015 N.L. Championship Series at Citi Field.

“The big thing with Travis is he always had power to the opposite field and to center field; he always had big-field power,” Anthopoulos said by phone Tuesday night. “But he’s had a bunch of injuries, and Josh Donaldson talks about it all the time: The sixth tool is staying on the field, being durable.”

Donaldson, now a third baseman with Minnesota, is another player Anthopoulos acquired for both Toronto and Atlanta. Anthopoulos had liked d’Arnaud since the first time he scouted him, in 2007, when d’Arnaud — then a high schooler from Lakewood, Calif. — worked out for the Blue Jays in Toronto.

“The old-time scouts would always tell you: ‘Watch for guys who do things with ease,’ and he did things with ease,” Anthopoulos said. “We were in line to take him, and the Phillies took him a pick ahead of us. But we kept track of him.” 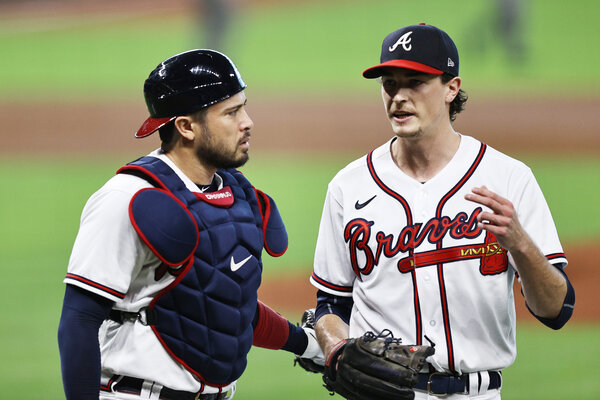 The Halladay trade helped the Phillies win two division titles, and when Anthopoulos had a chance to get Dickey, he sent d’Arnaud and Noah Syndergaard to the Mets. But injuries limited d’Arnaud’s playing time during his nearly seven seasons in Flushing.

He played more than 75 games just twice, and missed almost all of 2018 with Tommy John surgery. The Mets re-signed him as a backup for 2019, but released him in early May as he was hitting .087.

He bounced to the Los Angeles Dodgers, who sold him after one game to the Rays, who were scrambling to replace two injured catchers. D’Arnaud responded by hitting .263 with 16 homers, and Atlanta signed him before Thanksgiving.

With help from the veteran Tyler Flowers and the catching coach Sal Fasano — his Class AA manager with the Blue Jays — d’Arnaud has improved his skill at framing borderline strikes for pitchers. The Braves have a dominant bullpen but a makeshift rotation beyond Max Fried and Ian Anderson, and d’Arnaud has provided a steady foundation.

“Travis has been incredible this year,” said Fried, who lasted just four innings in Game 1 but could return on short rest for a possible Game 5. “He does a lot of homework, he has a good feel for the game and he’s able to make in-game adjustments. So even if it’s not a part of the game plan and he sees something that’s really working, he’s easily able to pivot off that and just ride with someone’s strengths.”

The Braves’ biggest strength is their lineup, which stirred with a leadoff homer by Acuna on Tuesday. The Marlins soon took a three-run lead, but after Sandy Alcantara drilled Acuna with a fastball in the third, the Braves’ offense erupted. It was the fifth time the Marlins have hit Acuna in his three-year career.

“I looked over to their bench and just sort of said, ‘Hey, it’s been five times,’” Acuna said through an interpreter. “I guess I could say I’m getting used to it at this point. I’m not going to give it any more thought.”

But Acuna said later it could not have been a coincidence that the Marlins hit him, because they do it so often. Braves Manager Brian Snitker said he did not think Alcantara meant to hit Acuna, but said it was “happening too much” and that the pitch inspired his offense.

That sounded right to d’Arnaud, who took the lead at the plate and behind it for his own memorable opener to an N.L.D.S.

“We all know what happened throughout the regular year and even years prior with Ronny,” d’Arnaud said. “That definitely woke us up and we took advantage of that momentum.”